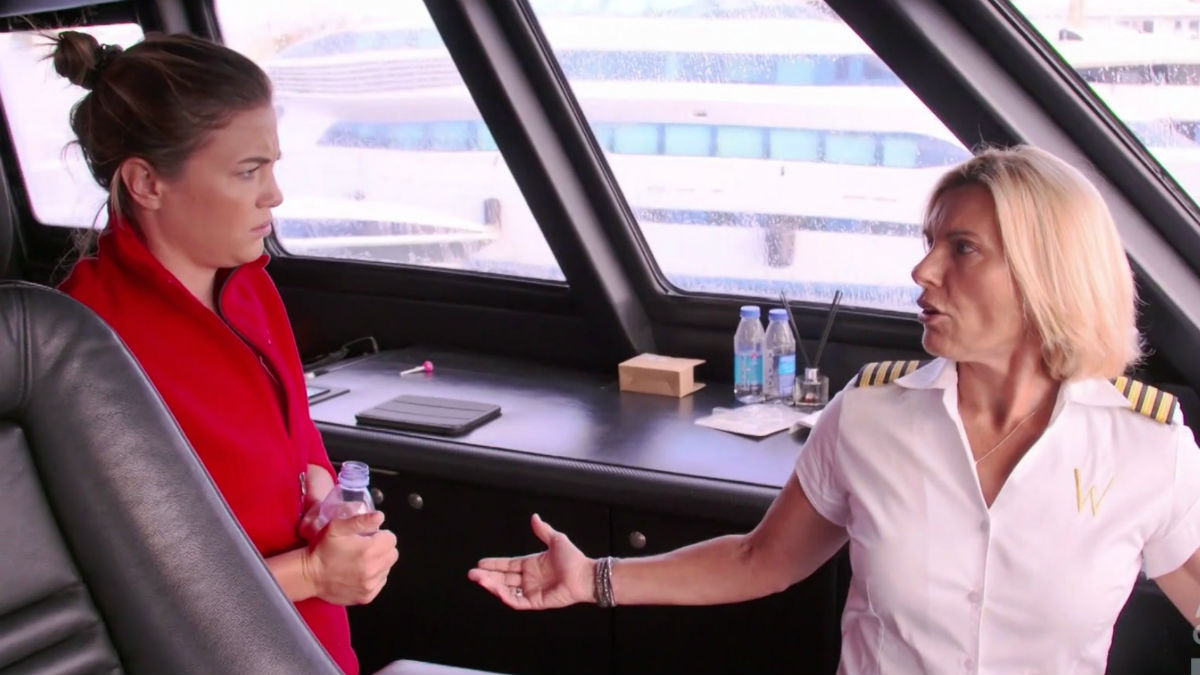 Below Deck Mediterranean’s Captain Sandy Yawn has apologized to Malia White for calling her secretly gay. The captain is claiming the video and remark was taken out of context.

Fans aren’t convinced Captain Sandy is sincere in her apology or that her words were misinterpreted. It is the latest in a long list of reasons why Below Deck Med fans are not happy with the captain.

In an Instagram Story, Captain Sandy shared a message to Malia and blamed the Cameo video for misrepresenting the captain.

“I was wrong for making that comment, that clip was taken out of context. It was spliced to make it into something it was not. My apologies to Malia,” Captain Sandy wrote.

Nope, she didn’t detail what she initially said or how the comment was taken out of context. Captain Sandy honestly did very little to do damage control. The message kind of comes across as just as spliced together as she claims the video is.

Perhaps Captain Sandy has reached out to Malia directly and apologized. As of yesterday, when Malia reacted to the video, the captain had not made contact with the bosun.

The Instagram account @belowdecksailing, a fan page for all things Below Deck, Below Deck Mediterranean, and Below Deck Sailing Yacht, captured Captain Sandy’s apology.

It didn’t take long for the post to become bombarded with comments. All users agreed that regardless of whether the footage was sliced or her words taken out of context, Captain Sandy still said Malia is secretly gay. 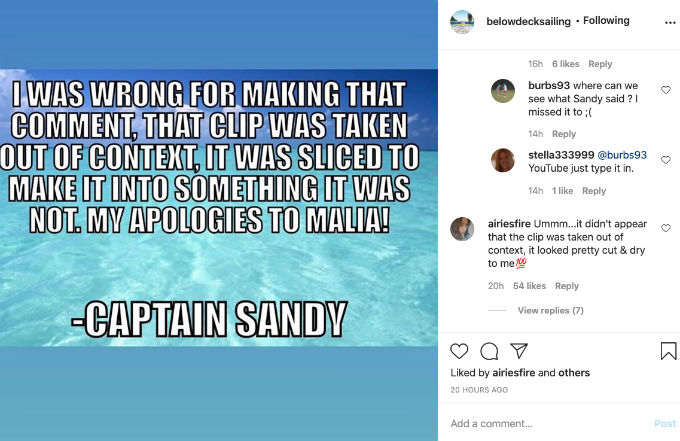 The inappropriate words came out of the captain’s mouth, which fans agree is unacceptable. As a public figure, a person in high rank, and a gay woman, Captain Sandy should never have commented on Malia’s sexuality.

If the clip was altered, fans want to see the actual video footage. The post featured several comments claiming Captain Sandy’s explanation fell flat. There is definitely more to this story.

Unfortunately, the captain and the person she sent the Cameo video too are the only ones who know the truth. Well, perhaps Malia knows it also.

Fans shouldn’t expect to learn the truth at the Below Deck Mediterranean reunion either because it has been filmed already. Andy Cohen asked Jessica More and Alex Radcliffe their thoughts on the virtual cast chat last Monday on Watch What Happens Live. They didn’t have anything good to say about it either.

What did you think of Captain Sandy’s apology?

Below Deck Mediterranean airs Mondays at 9/8c on Bravo.