‘Billions’ Ended an Era with One Last Sendoff Surprise

[Editor’s Note: The following contains spoilers for the “Billions” Season 5 finale, “No Direction Home,” including the ending.]

There are few things on TV more thrilling than a “Billions” episode that starts in media res. No matter how many hours the story jumps back, getting a glimpse of an opening that you know is going to be completely reframed is an invitation to go on a roller coaster that’ll end in fire or Ice Juice.

So in an hour that would ultimately mean the farewell of one of the headliner cast members that helped make “Billions” the “Billions” it became, it’s only fitting that the Season 5 finale teed up that ending with a trademark flourish. Kicking it off, there’s Chuck (Paul Giamatti) walking dazed through an empty-feeling Axe Cap atrium looking for one man in particular. After the previous week’s stunning close that left Axe (Damian Lewis) himself with a deer-in-the-headlights look, it’s easy to read this opening as Chuck having a tinge of regret and unease on what would be his pre-arrest victory lap.

Only, as “Billions” observers have come to expect, not only is Chuck’s emotional state a misdirect (Giamatti has perfected playing Chuck on a perpetual knife’s edge, regardless of temporal trickery), the “him” in question isn’t even the guy with his name on the building. In the biggest “Billions” twist yet, Axe is gone. He’s a ghost. (Or a Geist or a fantôme, to borrow some translations from the official languages in Axe’s new chosen homeland.)

However surprising Damian Lewis’ departure from “Billions” might be, it’s one that makes sense. Through the show’s run, Chuck and Axe have gone through every step on the ally/enemy spectrum. While the two were never friends — this season’s lingering animus is probably the best proof, in hindsight — their shared efforts did take down common foes and set up some mutually beneficial circumstances. Despite them being back at each other’s throats in Season 5, “Billions” is built on mutually assured destruction. After exhausting many of its available maneuvers to head off an all-out war, continuing the show only works if one of their arsenals is transferred to another player. 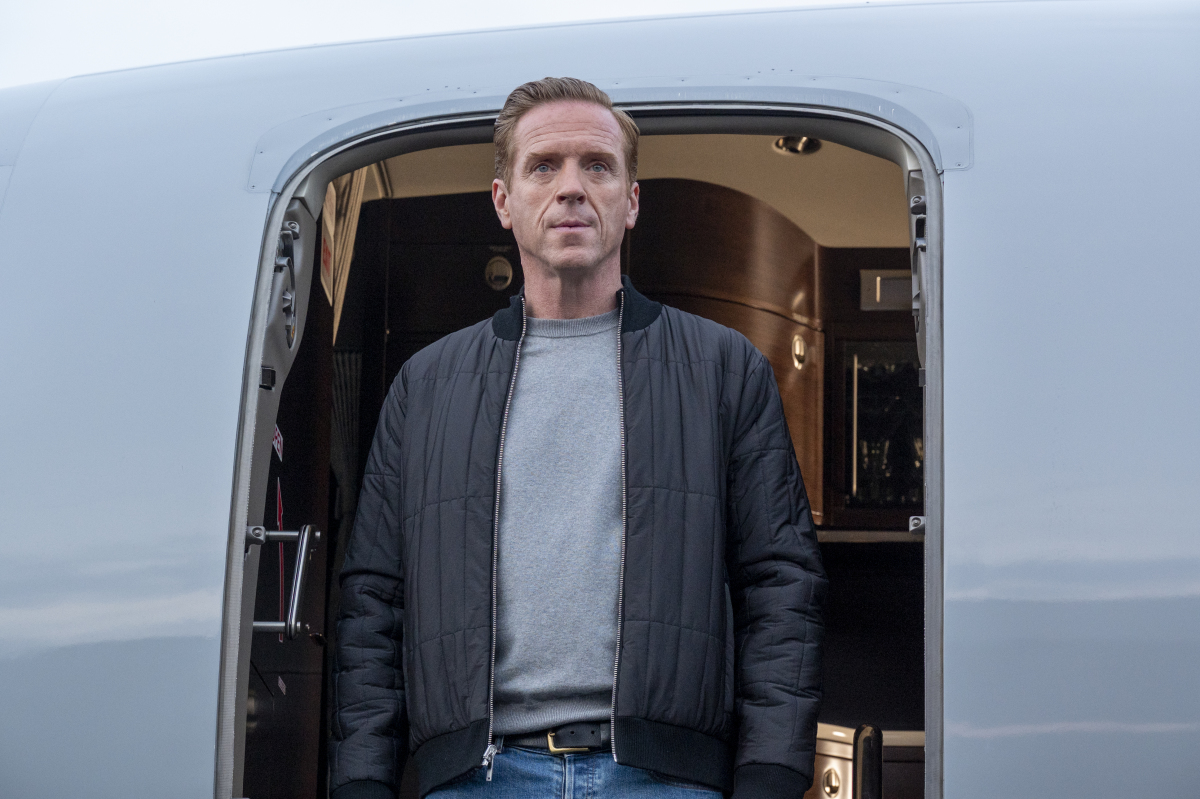 The Season 5 introduction of Corey Stoll turned out to be a savvy bait-and-switch (one that series showrunners Brian Koppleman and David Levien say was in place well before the season’s pandemic production hiatus). For a show built on the lives and preoccupations of The .1 percent, Stoll’s Mike Prince arrived as a potential new way of looking at wealth. At first, he didn’t seem to have Axe’s lust for financial conquest, and he certainly didn’t have the ostentatious flair of Wags (David Costabile). Here was the show’s best chance to present a billionaire who wasn’t a policy failure.

Regardless of how much of Prince’s instinct was there from season’s start or if a chance at the throne poisoned whatever good intentions he once had, it’s now Stoll who’ll be the above-the-title adversary in Season 6, set to premiere in January 2022. With the throne and the floor-to-ceiling windows comes the same kind of ever-present potential for hubris that befell his predecessor. It won’t be easy converting those in Axe’s former empire.

Dollar Bill (Kelly AuCoin) and Mafee (Dan Soder) have already left, potentially off to form their own equity splinter group to poke holes in Prince’s domain. If we haven’t heard the last of them, the countdown now starts to a back-room deal that helps get Taylor (Asia Kate Dillon) some leverage in the landscape they assumed they’d be controlling.

As pivotal as this episode is for what it did, it’s also worth noting what it refrained from doing. Another reason that Lewis’ exit makes sense is that Axe’s most compelling relationship had effectively ended. Even through their respective divorces and his sabotage of the rare evenly matched romances that came in its wake (still miss you, Rebecca Cantu), the Axe and Wendy (Maggie Siff) dynamic always drew its strength from an appreciation of each other that was proportionately platonic. They were symbiotic in a way that always had an underlying tension. The decision to leave that physical line uncrossed, even after each had passed that point in their daydreams, kept the Season 5 finale from being a full wish-fulfillment goodbye. The idea that, in Axe’s words, they don’t start what they can’t finish helps the show overall make a cleaner break. 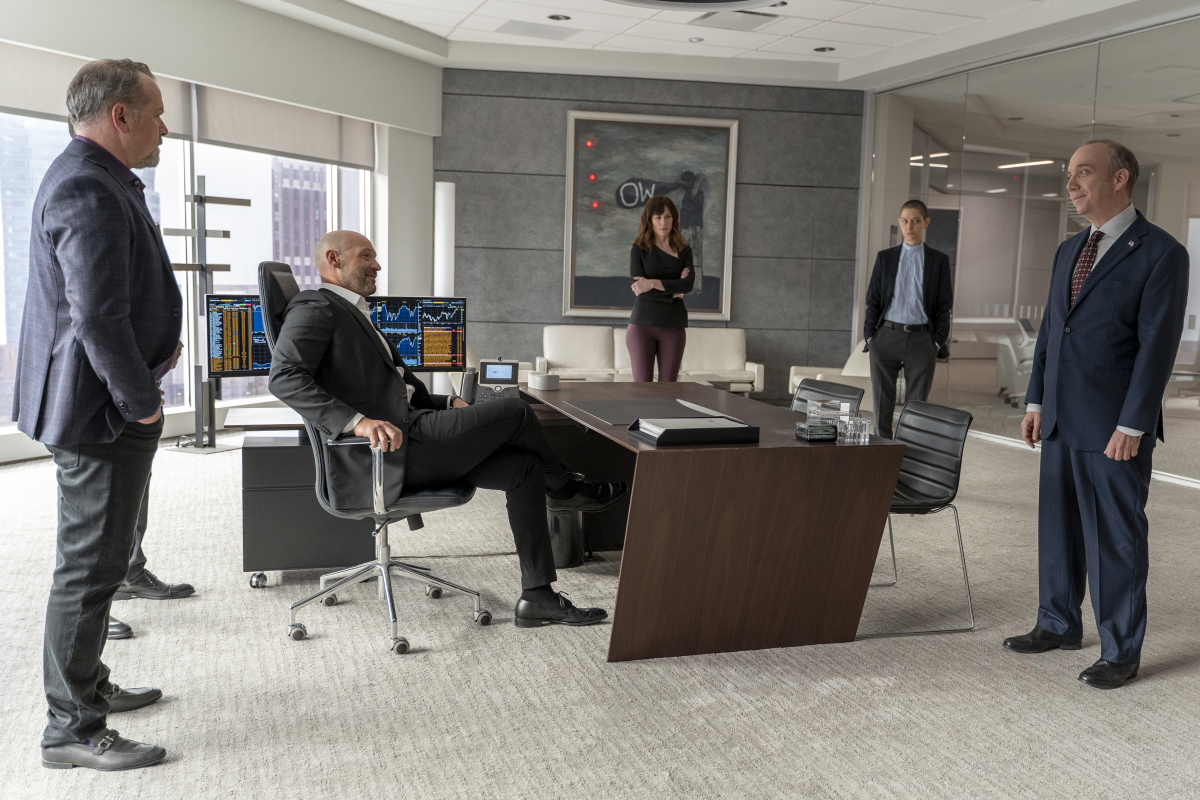 Though in a diminished form without his main enabler, it’s one of this episode’s many mercies to keep Wags in the fold, even if Prince takes a little too much satisfaction calling him “Wagner” instead. This show will survive without Lewis. It may even have survived if Chuck was the piece swiped off the board instead. But “Billions” fundamentally does not work without David Costabile. Long may he reign as the show’s resident hedonist.

Keeping Wendy and Taylor and Wags all in the fold leaves “Billions” in a rare dramatic position. Rarely is the king deposed without also a fresh overhaul of the court. (Though, Scooter is already settling in as an entertaining counterbalance. It’s encouraging to see that Daniel Breaker is getting upped to series regular.) While there are certainly moves to be made for Prince to bring in more of his people, “Billions” seems to be putting itself in a place to see if its overall body can survive a transplant. Prince won’t be the only big boss having to worry about his lieutenants — another missed opportunity for the state Attorney General perfectly sets up the chance for Sacker (Condola Rashad) to potentially move her allegiances, too. Season 6 is setting up to be more of a quantum chess match than the show has ever been. If the AL Wild Card race wasn’t going to give us chaos, it’s only a three-month wait to see what this fictional corner of the New York equity market can do to fill that void.

Amidst the parade of goodbyes for Axe/Lewis, Ben Kim says, “Feels like we’re at the end.” In one way, of course it is. But the show will still have its needle-drop tie-ins. (The episode title is a nod to the Dylan song that closes it out, while we also get a track from Season 5 guest star Jason Isbell.) There will be the gratuitous real-world cameos (though bringing in Neal Katyal here didn’t make for the greatest timing). And the triple enticements of money and power and revenge will all still make this show a transactional web of shaky team-ups and foiled plans. But it’s “Billions,” so like its departing protagonist embracing the snow-capped mountains of Swiss anonymity, it’ll do it all with a smile.

“Billions” Season 5 is now available to watch in its entirety on Showtime Anytime.