If ordered, it would mark the ninth DC Comics-based series for the network 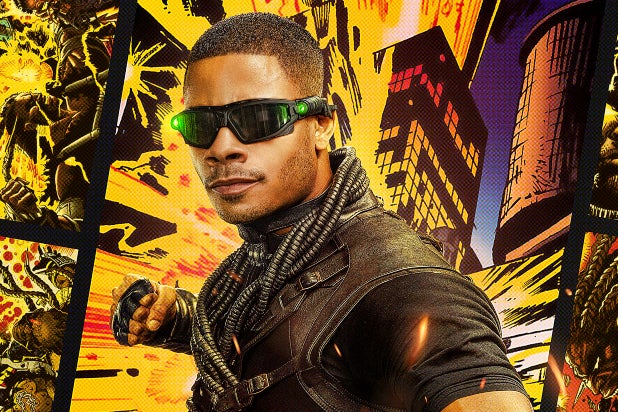 The CW is developing a spinoff of “Black Lightning” centered around Jordan Calloway’s Khalil Payne/Painkiller that will air as a backdoor pilot during the show’s upcoming fourth season.

The pilot will air as the seventh episode. “Black Lightning” returns Monday, Feb. 8.

During the first season of The CW superhero drama, Calloway recurred as Khalil Payne, a high school all-American track star until a stray bullet severs his spine. He’s then recruited by Tobias Whale (Marvin “Krondon” Jones III) who offers him legs for loyalty. Before his injury, Payne was romantically involved with Black Lightning’s youngest daughter, Jennifer Pierce (China Anne McClain).

He returned as the villainous Painkiller in the show’s second season.

Here is the logline for the project from The CW:

Khalil Payne (Jordan Calloway) is a young man ridden with the guilt of his troubled past from his former life in Freeland City, where, as a super-enhanced killing machine known as Painkiller, he was both a member of Tobias Whale’s gang and a weapon of Agent Odell and the shadowy ASA. After attempting to bury the darker, devastatingly lethal Painkiller part of his persona, Khalil has distanced himself away from everyone he knows and loves in a new city, Akashic Valley, in order to find peace…but peace never comes easy for men with pasts like Khalil Payne and Painkiller. As his violent, destructive history crashes his idyllic new beginning, Khalil is thrusted back into action with a new mission – bring justice where he once gave out punishment – but to do that, he will first have to deal with and harness his darker side, Painkiller.