The Chase: Bradley tells Shaun 'no flirting' with Charlene

Bradley Walsh, 60, was on hand to host another nail-biting instalment of The Chase on Monday, welcoming four players to go up against a Chaser to win a share of the jackpot prize. First up to play was contestant James and he managed to accumulate £5,000 in his cash-builder round alongside the host of the ITV quiz show. However, when he was asked who he would like to go head-to-head with, the quizzing amateur confessed Shaun Wallace, 60, was on his radar which subsequently led to a dig about the quizmaster’s abilities.

Having introduced all six of the Chasers, Bradley discovered Shaun was the favourite and decided to reveal some statistics.

Putting it in a way it could work to the team’s advantage, the host confirmed the Dark Destroyer was the quizmaster who “loses the most”.

This makes him the worst according to the numbers but unfortunately for James and his teammates, they faced Paul ’The Sinnerman’ Sinha, 50.

Taking to Twitter, viewers commented on the dig made at Shaun’s expense, with one writing: “Slightly enraged that he insulted Shaun. No one is allowed to insult our chasers but us #TheChase.”

A second posted: “And for flippantly disrespecting Shaun, [Bradley] gets to face the *best* Chaser, what an absolute tool. Get him Paul #TheChase.” 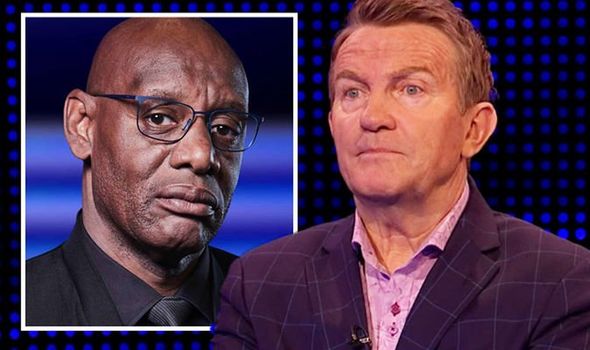 “Oh man, blunt as f**k with the reason wanting Shaun. everyone else is like ‘Ooo yeah, I’d like to take on Shaun, the mastermind champ’ when in reality they know he’s s**t #thechase,” a third shared.