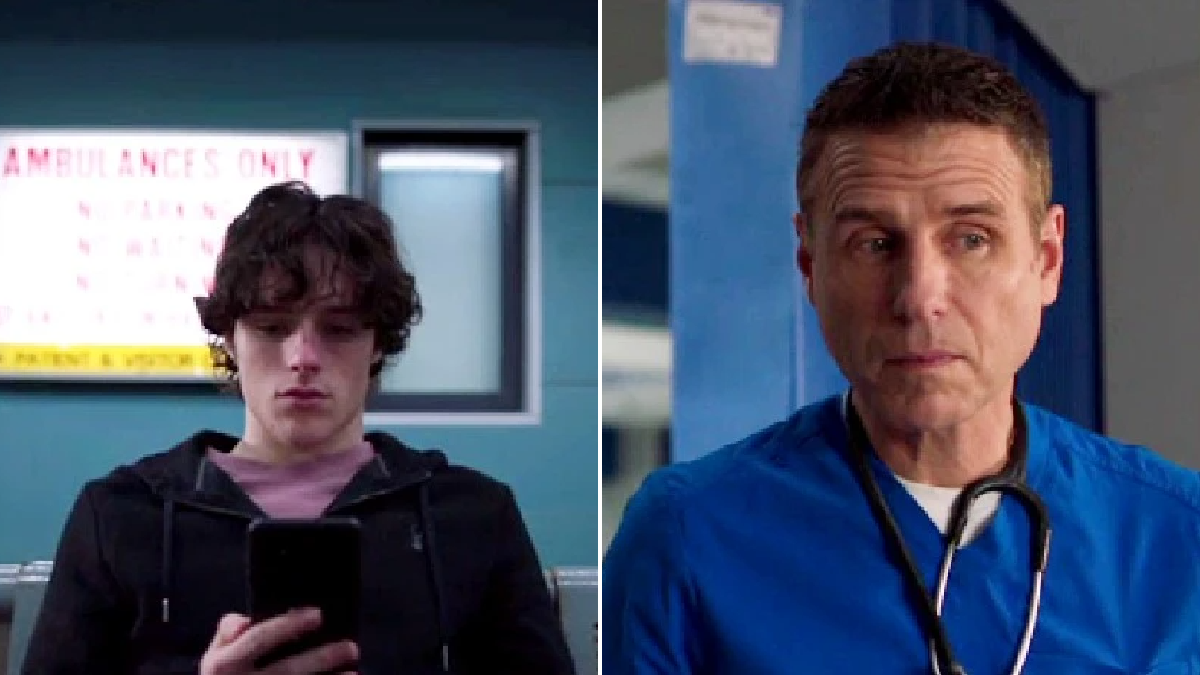 A new side to Sah (Arin Smethurst) was revealed in tonight’s Casualty, as we discovered that they were struggling with anger issues.

When the X rays of a patient called Scott showed multiple former broken bones, he said it was a skateboard injury, as in someone had hit him with one. And the person who’d done it was Sah.

The two had known each other at school, where Scott had bullied Sah and after Scott made a cruel joke about Sah’s dad Kevin, Sah had lashed out. As a result they were expelled from school, and the trauma of being bullied stopped Sah being open about their gender identity for a long time.

‘There’s people and politicians who think I shouldn’t exist, so I’ve got that one fear going on. I don’t need another,’ they told Iain (Michael Stevenson). He gently told Sah not to keep everyone locked out.

This led to some happy scenes at the end of the episode where Sah celebrated their birthday with their colleagues – and now friends. In a lovely little hark-back to Holby City from former Holby writer Ed Sellek, Jan (Di Botcher) reminded everyone that ’It’s karaoke night at Albie’s! Fletch once said I had the pipes of a church organ.’

Meanwhile there was something a bit sinister going on concerning Ollie Hide (Harry Collett)’s best friend Rob – who was in the ED after getting a nail through his leg after falling while being chased by the police.

Rob seems to be a good friend to Ollie and he’s certainly impressed David (Jason Durr) – who Ollie currently blames for alienating him and the still-absent Rosa (Jacey Salles). But is Rob as nice as he seems? When he thinks no one’s watching him, his expression changes and he gets a sly little grin on his face.

Poor David is struggling to deal with his apparently off-the-rails son, and he seems as in the dark as we are about why Rosa hasn’t returned to Holby yet. He rang her and left an awkward little message ending with, ‘It’s David, by the way.’ What’s going on?

And Iain told Faith (Kirsty Mitchell) that he hadn’t had any news about Elivira, the woman he’s trying to rescue from a modern slavery gang, and he doesn’t think he will. Which either means that the story is over or – more likely – it really isn’t.