“I feel like the last thing I want to watch right now is something really f—ed up,” “The Walking Dead” alum tells TheWrap 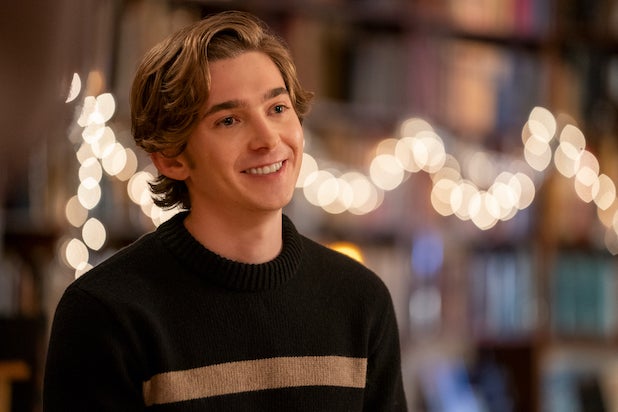 (Warning: This post contains spoilers through the finale of Netflix’s “Dash & Lily.”)

Netflix’s holiday rom-con “Dash & Lily” centers on two characters with very different hot takes on Christmas: Dash (played by Austin Abrams) hates it with a burning passion and Lily (Midori Francis) loves it with all of her warm heart.

Throughout the show’s 10-episode first season, which launched Tuesday, the two New Yorkers learn to see both sides more clearly after Dash finds a notebook left by Lily at her favorite bookstore, The Strand, and the teens begin to write back and forth to each other. Their romance blossoms as they challenge each other, both with literal tasks and emotional inquiries, in the days leading up to Christmas.

Along with offering a very uplifting and adorable love story, “Dash & Lily” — which is adapted from a book series written by Rachel Cohn and David Levithan — gives viewers an almost fantasy-like version of New York City, as the show was shot last fall, well before the pandemic changed the landscape of the entire country.

“I am happy in a way that it’s coming out now, because it does fill a void for people,” Abrams told TheWrap. “I think that kind of escapist TV or movie, what have you, is nice for right now. I feel like the last thing I want to watch right now is something really f—ed up. I remember at the beginning of this pandemic, watching ‘Contagion’ or something like that. And now I’m just not interested in doing that anymore because we’re all living it right now, I am not interested in watching that at the moment.”

Along with The Strand, Abrams and Francis got to enjoy so many iconic places in New York City, like the Morgan Library & Museum, Two Boots Pizza and Central Park. But due to the premise of the show, they didn’t actually enjoy all of these places together, with the co-stars only filming a handful of scenes in the same room.

“Dash & Lily,” Netflix’s first-ever Christmas rom-com TV series, has yet to be renewed for Season 2, but Abrams tells TheWrap he’s already contractually on board for more seasons.

“I’ve signed a couple years of my life, so yeah, I think that [a second season] is possible. I don’t really have the exact answer for you yet, but I think it’s definitely a possibility.”

And with the show being based on three books, there’s definitely more of Dash and Lily’s relationship to explore, especially now that they’ve actually started their in-person relationship by the finale. Of course, fans have already seen that Dash and Lily leaving their written selves behind in favor of the real thing poses some problems.

“I think that was the part that was very freeing for both of these characters,” Abrams said of the red notebook. “They seem to both have trouble expressing themselves. So having that anonymity with just writing each other and not knowing one each other, I think was very helpful for the both of these characters in terms of expanding themselves as people because they were expressing these intimate things to one another but feeling free to do so. And I suppose somewhat free of judgment in a way, because the other person didn’t know who they were.”

“I mean, of course you could always judge the words of this random person, but it doesn’t feel as– there’s less judgment there because of the anonymity,” he added. “So think that was very helpful to expanding them as people, and also getting to know one another. It’s probably the first time they’re really getting to know another person in that intimate way.”