Home » Did Starz' Run the World Win You Over? Grade the Premiere

Did Starz' Run the World Win You Over? Grade the Premiere Episode 1 kicks off with Ella (Andrea Bordeaux), who wakes up late for work after a night of drinking with her friends. Rushing to get ready while chatting on the phone with Renee (Bresha Webb), both women ruminate over the fact that they can no longer wake up and go without feeling hungover like they did in their 20s. 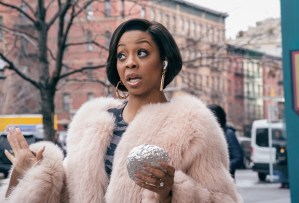 Renee is in a bodega waiting for her breakfast sandwich to be made, giving Ella a pep talk and restraining herself from cussing out the oblivious white woman who keeps stepping on her feet. (She opts to forcefully quote Maya Angelou’s “Phenomenal Woman” and storm off with her food instead.)

Meanwhile, it’s Ella’s first day at the digital gossip site Hot Tea Digest, which she views as a step down in her career. She’s still wounded from her second book flopping and the heavy critiques of her feminism. She and her boss Barb (Living Single’s Erika Alexander) recognize that the media industry isn’t as glamorous as it used to be. They now work in offices with open floor plans and no longer receive fun perks like car service and parties in the Hamptons. But they must adapt and do what works now, including covering Soulja Boy’s “Legends” party at a club.

Elsewhere, Whitney (Amber Stevens West), a banker, is an expert multitasker. She’s riding a stationary bike in her fancy New York apartment while fielding calls from both her mom (about her upcoming wedding with fiancé Ola (Tosin Morohunfola), Nigerian-American doctor) and work about a big problem that needs her attention.

The morning is equally chaotic for Sondi (Corbin Reid), who attempts to have morning sex with her boyfriend Matthew (Stephen Bishop), which is interrupted by Matthew’s daughter Amari calling for breakfast. Their situation is complicated given that Matthew is her thesis adviser and this relationship could get him fired and her kicked out of school. Still, they live together and are raising Amari, who is not Sondi’s biological daughter. Sondi is concerned about how ballet lessons are effecting Amari’s confidence, especially after Amari opts for the pink ballet slippers instead of the ones she tailored for Amari’s skin tone. Plus, an instructor hands her a pamphlet with nutritional tips for dancers of Amari’s “ethnic background.” 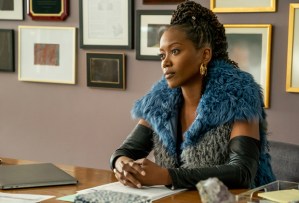 Later that evening, the ladies decompress over drinks and help Whitney stuff envelopes with wedding invitations. Sondi wants to enroll Amari in a ballet school in Harlem which might be better for her mentally, Renee is commiserating over her bad day at work, and Whitney is freaking out because her small wedding is now going to be a huge extravaganza thanks to both her overbearing mom and her fiance’s relatives. They’ve taken over the planning and are all pushing for an over-the-top ceremony.

Sondi leaves dinner early to support Matthew, who’s holding a small seminar for an essay he wrote. Meanwhile, the rest of the gang decides to go downtown for Soulja Boy’s party, which Ella has to cover for work.

After being denied access to Soulja Boy for looking “too mature” for his taste, Renee forgets about the rejection on the dance floor and Whitney flirts with a guy who’s slept with all of their friends. Ella runs into her ex-flame Anderson (The Princess Switch’s Nick Sagar), who she hasn’t heard from in years. The sexual tension is still there, and they briefly kiss, but Ella backs off because she’s not ready to revisit their past. She ends up leaving with a fellow journalist, but their hookup is cut short when they realize he’s too drunk to have sex.

Matthew confronts Sondi for upsetting Amari and trying to turn this situation into another one of her protests. Sondi expresses her worry that Amari is trying too hard to be like the other girls in her class and is trying to teach her to be comfortable in her own skin. Their spat ends with Sondi storming out after Matthew tells her she overstepped and needs to grow up. 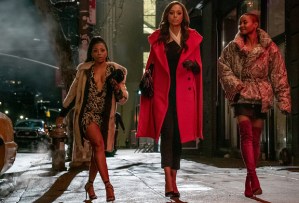 Elle drops by Sondi’s apartment to write up her story and talk about her run-in with Anderson, who she refers to as her “Big.” Sondi immediately shuts that notion down because he isn’t tall or rich, and doesn’t have a driver like Chris Noth’s character. Besides, they have bigger concerns, like world domination. “Head up, eyes on the prize.”

The episode ends with an update on Whitney: She hooked up with the “community peen” and seems exhilarated until reality sets in that she may have just blow up her fairytale life.

What did you think of Run the World’s first episode? Will you continue to watch? Grade the premiere below and let us know your thoughts in the comments.