Eamonn Holmes and Ruth Langsford were celebrating their tenth wedding anniversary on today’s edition of This Morning. After several well-wishes from viewers and guests, it wasn’t long before the pair were back to their usual selves, light-heartedly bickering with one another. This time it was over the magazine show’s game, Spin to Win, when Ruth jumped in and spoke to the successful caller, leaving Eammon annoyed as it was supposedly his turn to present.

This Morning viewers were treated to not only one round of Spin to Win, but two.

It came after yesterday’s show when Phillip Schofield and Holly Willoughby attempted to call three viewers, but no one answered.

In a show first, the game was rolled over and it was up to Eamonn and Ruth to give some money away.

After the first caller, Eamonn and Ruth waited several rings until the second picked up and answered with the pass phrase: “Hasta La Vista Baby!” 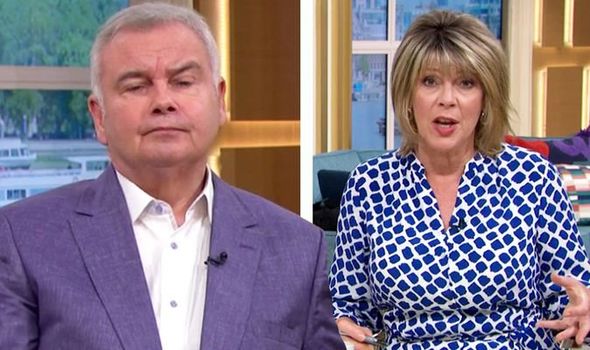 Jumping in, Ruth exclaimed: “Yes baby! That’s the one!”

And Eamonn who was standing the other side of her remarked: “I was about to tell her it’s the dentist!

“Why do you always spoil the jokes?” And Ruth hit back: “I was too excited. And you’re cruel, your humour is cruel when you do that to people.

“Hello! You were correct with the pass phrase, who are we talking to?” Ruth asked. 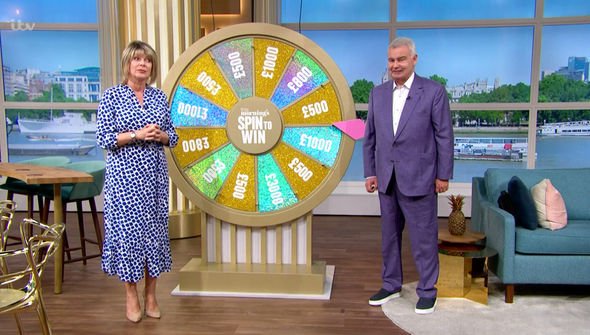 Eamonn also said: “Who was that? Who was that we’re talking to?” and the caller said her name was Lesley.

“Where are you phoning from Lesley?” Eamonn asked and she revealed her location.

She was then asked who she would like to Spin the Wheel for her – Eamonn or Ruth.

“First of all, would you like Ruth to spin the wheel or a proper spin from Eamonn?” Eamonn remarked.

“I think I’ll have Ruth, Eamonn, but no offence,” Lesley remarked.

“Here we go Lesley, come on… I didn’t go quite so hard that time,” Ruth commented as she spun the wheel.

“So close!” Eamonn exclaimed. “Anyway £500, would you also like one of the jigsaw puzzles the last person didn’t want?”

Luckily for Lesley, she managed to answer the question correctly and got the ‘money can’t buy’ bag of This Morning goodies.

Following the game, more well wishes for their anniversary were sent in.

Eamonn joked: “We’ve never a row, never a cross word in that time!”