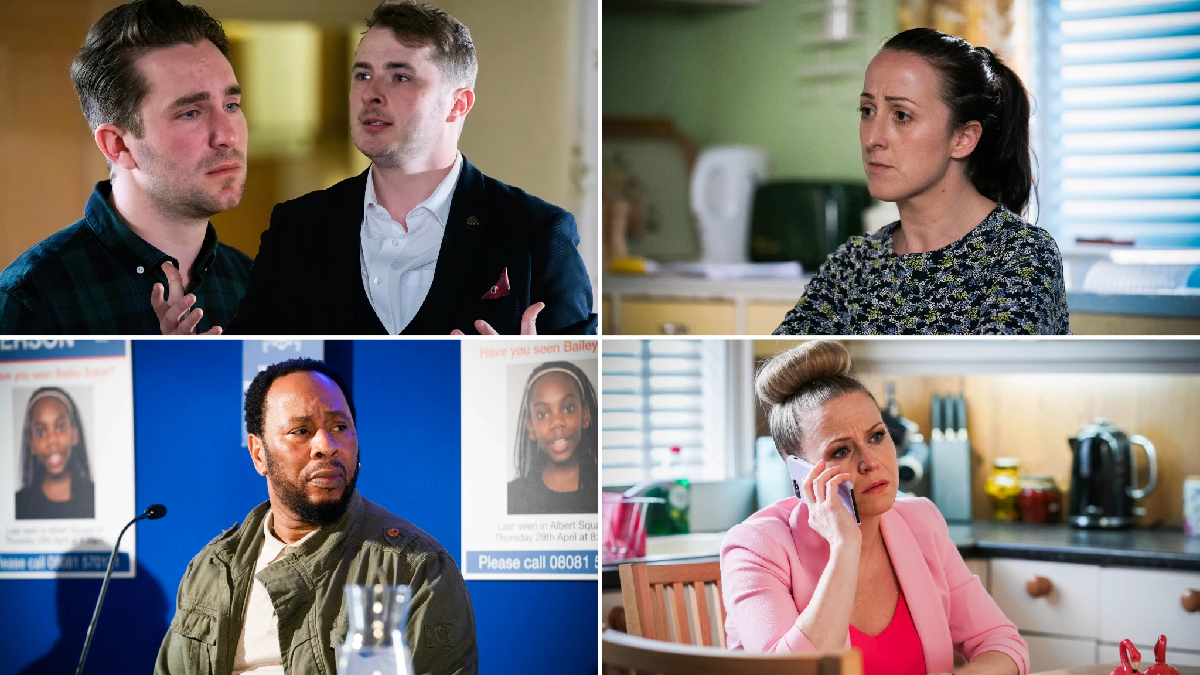 There is horrific torment ahead for the Taylor family in EastEnders as they launch an appeal to find missing Bailey Baker (Kara Leah-Fernandes), with Karen (Lorraine Stanley) and Mitch (Roger Griffiths) fearing the worst.

And a different kind of fear is coming from Callum Highway (Tony Clay), who realises it’s time to come clean to groom to be Ben Mitchell (Max Bowden) about the true extent of his work against Phil (Steve McFadden) with the police.

Will the wedding be de-railed?

Whitney tells Callum that she won’t be attending his wedding, as she still suspects that Ben was involved in Kush’s death. Callum is also growing increasingly suspicious, especially as Ben is planning a secret meeting and is behaving strangely.

Callum demands to know whether Ben hurt Kush, but all becomes clear when Ben reveals who he really met up with. Stuart and Ben have teamed up to bring Callum’s grandmother Violet to Walford as a surprise before the wedding.

With the confusion resolved, Ben promises Callum that there will be no more lies. This forces Callum to share a revelation of his own, confessing that his real target was Phil when he went undercover.

Meanwhile, the police want to search the Taylors’ home again following Bailey’s disappearance. Mitch fears that the police are trying to blame them. Later, Amy mentions that Bailey knew the family couldn’t afford space camp. Mitch realises this is part of the reason that Bailey ran away.

Elsewhere, Linda struggles with Nancy’s decision. She soon takes matters into her own hands, making a call and pretending to be Nancy.

Linda speaks to Nancy’s doctor at the clinic, but is stopped in her tracks when she feels faint. Linda admits to the doctor that she thinks she might be pregnant.

Later, Nancy confronts Linda over her meddling, leading to an angry showdown between them.

Meanwhile, Ben is furious after Callum’s confession and demands a further explanation.

Elsewhere, Jack suggests that the Taylors should do a TV appeal for information on Bailey.

Phil is unaware of why Ben and Callum aren’t on good terms, so he tries to help by ordering Callum to sort things out.

Callum tells Ben that he’ll be waiting at the registry office on Monday and hopes Ben will show up.

Meanwhile, Karen struggles while giving the TV appeal. Nasty comments are left on the fundraising page and Karen also reacts badly when she finds a gift hamper left on her doorstep. Karen ends up heading into the Square in a rage.

Elsewhere, tensions continue to run high between Linda and Nancy.

Denise gets nowhere when she tries to apologise to the Taylor family for the hamper yesterday. Denise finds another way to help the family by going to see Apostolos.

Jack later tells the Taylors that Bailey has been spotted and Apostolos has also dropped all charges after yesterday’s incident. Keegan interrupts the conversation by encouraging his family to head to The Vic.

At the same time, Bailey rests in a sleeping bag at an underpass, with Banjo by her side.

Meanwhile, Kat gives Vi a piece of her mind when some of her comments rub Phil up the wrong way. Phil is grateful that Kat stuck up for him.

Elsewhere, Bobby’s lies threaten to catch up with him when Dana arrives at Walford East unexpectedly. Bobby comes clean to Peter about all of the lies that he told to Dana.