Sharon (played by Letitia Dean) was left at the mercy of Mel (Tamzin Outhwaite) on tonight’s edition of EastEnders as after believing she’d convinced her business partner Keanu (Danny Walters) wasn’t the father of her child, the villainous character found some incriminating evidence. In order to keep gangster Phil Mitchell (Steve McFadden) in the dark about her scandalous secret, it seems the BBC soap stalwart could see her days numbered as she looks set to turn against him.

One of his requests was telling Sharon to deny the grief stricken mother the funds she needed to pay for the funeral from the E20 business accounts.

Sharon tried to broker peace with her fellow club owner after Hunter’s burial but when the women exchanged crossed words, the expectant mother ended up slating the deceased character.

Mel promised the soap stalwart she would pay for her harsh words and tonight’s instalment’s saw her put her villainous plans into action. 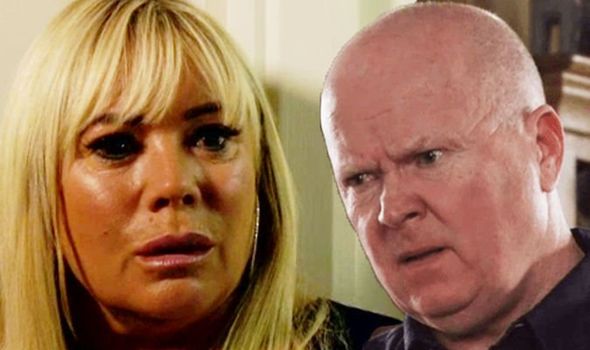 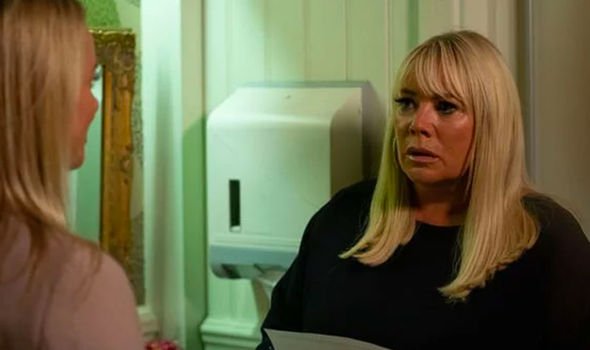 After failing at getting Sharon to confess to the affair, noticing hints she and Keanu were in cahoots over her pregnancy, Mel managed to get hold of the company the expectant mother had gone to requesting DNA confirmation on who the baby’s father was.

Confronting the soap icon in the pub toilets at the end of the episode, Mel revealed she’d got the evidence she needed to bring her rival to her knees.

Realising the game was up, Sharon pleaded with her business partner not to tell her husband, to which Mel hit back: “What do you expect from the mother of a heartless psychopath?”

“What do you want? Money?” a desperate Sharon asked. 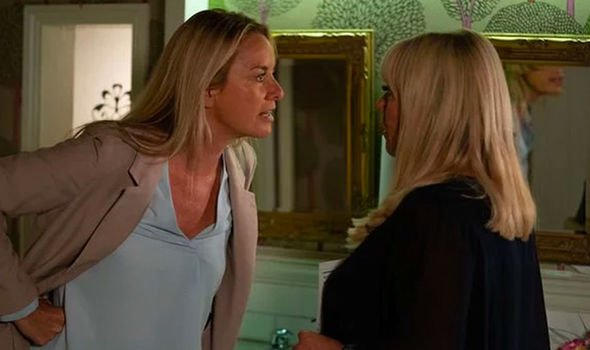 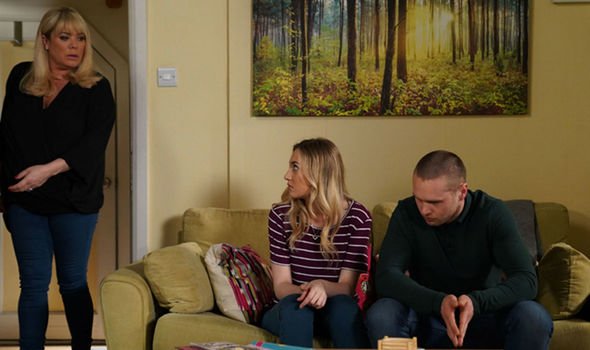 It will destroy her

Knowing she now held control of the situation, Mel issued her demands, telling the love rat: “No. I want Louise out of that viper’s nest you call home, safe with me and her mum.”

“That’s crazy. I can’t make her do that,” Sharon declared, knowing Phil wanted his daughter nowhere near her business partner.

Giving the expectant mother 24 hours to follow through with her request, the horrified character replied: “That’s impossible.

“She won’t go anywhere without Keanu. Please you can’t tell her, it will destroy her.”

“Fine, I’ll take him too then. For now,” Mel sinisterly demanded, before adding: “I told you you’d regret it.”

Having managed to keep the secret for so long, will Sharon betray Phil once more and hand over his daughter to flee the Square with her mother Lisa Fowler (Lucy Benjamin) and her hatred-fuelled rival?

Spoiler pictures last week teased the storyline will reach a terrifying head when both Sharon and Mel are involved in a car crash.

This could come as after realising Louise has left, Phil tells Sharon who ever helped Lisa and Mel will pay with their life for betraying him.

Having to act fast, Sharon could follow in hot pursuit of her business partner in order to get Louise back.

Actress Tamzin will be leaving the soap in the coming weeks, so could she escape the crash unscathed and take Louise with her, leaving Sharon to pick up the pieces and falling victim to Phil’s rage as she ends up dead?

Teasing the scenes to come for Mel following Hunter’s death, executive producer Jon Sen told press, including Express.co.uk: “It will skew her perception of the world and what the world owes her and what’s fair and what’s right and maybe she’ll come out of this a more brittle person and that will give us a fair whack of story.

“And also plays into, obviously it’s another step in the ongoing Sharon/Keanu story which builds a pace. Their relationship and Keanu’s investment in Louise and how that plays out here, it’s an important step.”

EastEnders continues Tuesday at 7.30pm on BBC One.