Laurel Thomas (played by Charlotte Bellamy) used to be married to the Emmerdale’s vicar Ashley Thomas (John Middleton), and as a man of God, he was constantly explaining the reasons behind some of the lessons life threw at him and his wife. But in recent months, Laurel has been tested far beyond what she thought she could cope with. In upcoming scenes, she left teetering on the edge of destroying her sobriety. Luckily, an intervention occurs, but will Laurel listen if she is advised to leave the village for a while and seek help?

As a recovering alcoholic dating a recovering drug addict, Laurel has done her best to keep her relationship with Jai Sharma (Chris Bisson) and make their dysfunctional family happy.

A few weeks ago, when she found out she was pregnant and viewers saw Laurel experience a mixture of emotions.

But she was challenged further when she was told the baby had Down syndrome.

Despite making the difficult decision to terminate the pregnancy, Laurel has been left harbouring feelings of grief and guilt. 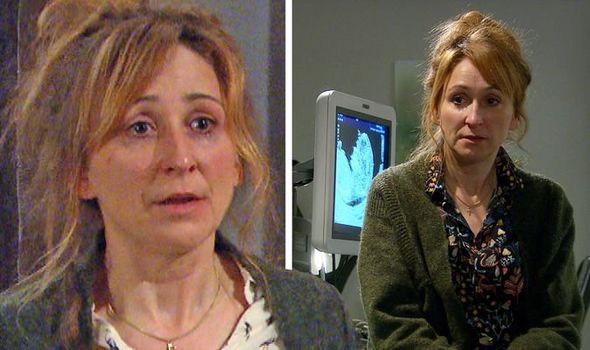 In heartbreaking scenes, ITV viewers saw the storyline play out from several character’s perspectives; Laurel and Jai, Rhona Goskirk (Zoe Henry) and Marlon Dingle (Mark Charnock) – with the latter having welcomed Leo, an extremely happy Down syndrome child into their lives nine years ago.

With Laurel only a few years away from hitting 50 years old, she made the heartbreaking decision to not have her and Jai’s child.

While she knew this was the right choice for her and her family, she faced judgement from Rhona who wasted no time being extremely vocal with her criticism.

Over the last few weeks, Laurel has got on with her day-to-day routine, seemingly coping.

However, when she attended David Metcalfe’s (Matthew Wolfenden) ‘welcome to the family’ party hosted by Meena Jutla (Paige Sandhu), her sobriety was questioned. 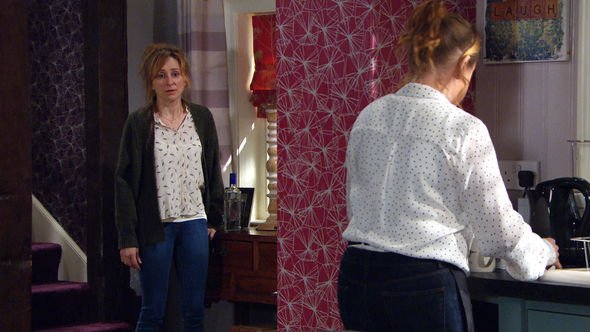 Those watching at home saw her presume the juice drinks on offer were alcohol-free, until Meena confessed they were in fact, cocktails.

Jai reassured his partner that she wasn’t to blame for consuming the alcohol because it wasn’t an active choice of hers.

But, this moment invites Laurel’s demons back and she feels tempted to drink again.

Official spoilers for the soap explain how the mother of three is struggling and when she finds a bottle of vodka in one of her kitchen cupboards, she is enticed to open it. 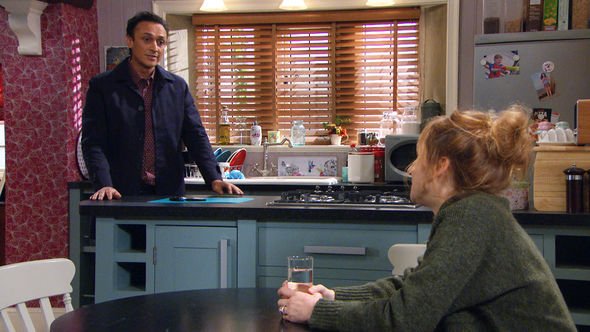 Fans will see her contemplate what she should do next; drink it or pour it down the sink.

But her thought process is interrupted by an alert from her phone, it is a pregnancy app which delivers a cruel blow.

Succumbing to temptation, Laurel knocks back a shot of vodka, feeling a sense of release as she swallows.

She is interrupted by Nicola King (Nicola Wheeler) bursting through her front door and the community busy-body catches her red-handed with the bottle.

It isn’t long before Nicola questions her best friend, and instead of passing judgement or shouting at her, Nicola holds Laurel.

Finally, Laurel tells Nicola about the baby and the termination, and the cafe owner’s heart breaks for her.

When Nicola gets a moment to herself, she calls Jai and when he arrives home, he sits Laurel down and talks to her.

Jai reminds his partner that he understands the battle she is enduring with alcohol, as well as reminding her he also empathises with her grief for their baby.

Will he be able to help Laurel? Or has the current circumstances become too much for her and she feels the need to leave the Dales for a while and gather her thoughts?

Speaking about the storyline previously, the actress who plays Laurel said: “Terminating a pregnancy is an emotive subject, but I think, as a programme, what Emmerdale does brilliantly is portray difficult stories that are important to tell.

“Laurel and Jai’s story will take the audience on the journey of them coming to this conclusion and having some understanding why they do.

“There are some very powerfully written scenes that I hope will give a fair portrayal of their situation.

“When I embarked on this storyline I was well aware of the responsibility of the subject matter, but the scripts have been so well written and I think the story is told fairly,” she added.

Viewers were left divided by the storyline, with some understanding of Laurel’s choice and other criticising.

If you or anyone you know has been affected by Laurel’s storyline, please see Alcoholics Anonymous’ website here, for free confidential advice. Alternatively, their helpline is 0800 9177 650 and you can call them for free.