Emmerdale: Cain nearly walks in on Al and Chas

During Thursday night’s Emmerdale, ITV viewers were left in tears as they watched Rhona Goskirk (played by Zoe Henry) and Marlon Dingle (Mark Charnock) finally tie the knot. It was a magical moment for the villagers as they all gathered to celebrate the couple’s big day. However, things took an unexpected turn when Al Chapman (Michael Wildman) and Chas Dingle (Lucy Pargeter) met up during the wedding reception.

The barmaid told her partner Paddy Kirk (Dominic Brunt) that she wasn’t feeling well and so, she went for a walk to clear her head.

Although, it didn’t take long for Al to persuade Chas to go inside the house just as the reception was about to start.

However, Cain almost caught the pair in the act after spotting Al holding two wine glasses.

The mechanic had let himself into the house so that he could grab his son’s iPad. 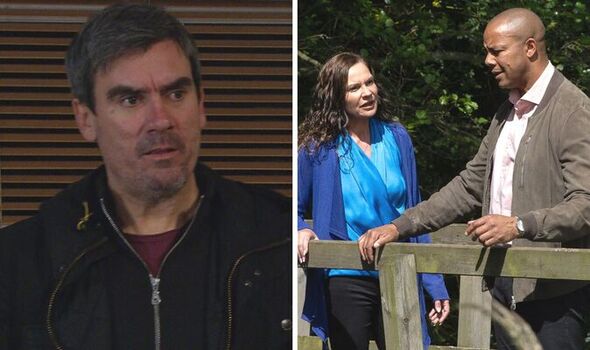 “Do you make a habit of just walking into people’s homes?” a surprised Al said.

“This is way more disturbing for me,” Cain replied before adding: “Anyway, Amy gave me the keys, I’ve just come to pick up Kyle’s tablet.”

Al looked on edge as Cain walked to the back of the room where Chas was hiding.

However, he didn’t seem to acknowledge his sister’s presence and went straight for the tablet.

Before he promptly left, Cain told Al: “Give my condolences to Kerry.”

Although, just because he didn’t make a fuss of it, doesn’t mean he hasn’t worked their affair out.

After all, if Cain spotted Al’s girlfriend, Kerry (Laura Norton) at the reception, he could question who the glass of wine was for.

Following the explosive episode, Emmerdale fans have taken to social media to share their thoughts on how Cain will expose his sister and Al.

Grianne wrote: “OMG for Cain of all people to almost catch Chas & Al in the act seriously?

“Also can’t believe Chas would run on her own Cousin’s wedding after everything he’s been through to go chasing Al of all people really?” (sic)

Gemma Chatter predicted: “Cain is going to rumble them isn’t he!”

“I bet that Gabby will continue to see Kit. Caine will catch on to Al and Chas’ affair,” User Elcano tweeted.

“B****y hell Chas has a lucky escape there when Cain walked in,” Ryan Glendenning tweeted.

Dan theorised: “Is Cain gonna find Al and Chas there? Al is so disgusting hope Al and Chas are found out soon?” (sic)

While Teena added: “I was hoping Cain would catch Chas with Al, disappointed…”