How 'Lovecraft Country' Depicted the Tulsa Race Massacre in Episode 9

The HBO horror series, Lovecraft Country, is at its best when it blends history with horror, showing how institutionalized racism in America and the monsters within are just as evil as the supernatural beings inspired by author H.P. Lovecraft. After exploring the atrocities of the Forgotten War, Jim Crow laws and sundown towns, episode nine — the penultimate episode of season one — sets the story against the backdrop of the Tulsa Race Massacre of 1921.

In the episode, “Rewind 1921,” Atticus (Jonathan Majors), Leti (Jurnee Smollett) and Montrose (Michael K. Williams) travel back in time from 1950s Chicago to the Oklahoman city in hopes of finding a book that will help put an end to a string of horrors they’ve suffered. It’s only after they arrive via a portal created by Hippolyta (Aunjanue Ellis) do they realize they’ve returned on the morning of one of the single worst acts of racial violence in American history.

In the 99 years since, the destruction of Tulsa’s thriving Black neighborhood, Greenwood District, and the deaths of hundreds at the hands of white mobs has largely gone ignored in history classes and become a forgotten crucial part of history. That is, until HBO’s other series, Watchmen, revitalized attention surrounding the massacre and forced audiences to face an ugly truth about American culture: systemic racism has always and still exists.

Cinematographer Michael Watson, who previously worked with creator Misha Green on the WGN America slave drama Underground and was the director of photography on episode nine, tells ET, “projects like Lovecraft Country are unique in that they are education wrapped in entertainment.”

“When we started filming Lovecraft Country, the world was very different,” he says of the production that was completed before the coronavirus pandemic and the killing of George Floyd that sparked the current Black Lives Matter movement in America. “I get chills now when I think about what that means. It’s truly a moment in my life that I may never be able to duplicate, just because of the new normal we now live in.” 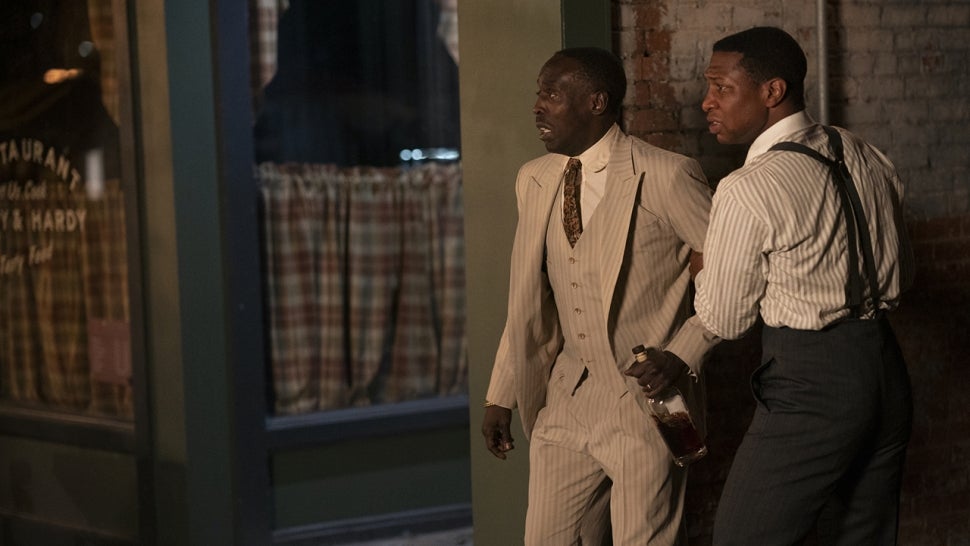 It also exemplifies why it’s so important that ambitious shows like Lovecraft Country and Watchmen, which are willing to hold a mirror up to society, exist. “The history that is just as horrific as the monsters we made up, all of that has been buried,” Green says. “One of the reasons for my love for the project and my excitement to do the project was uncovering all of these things that we have not been told when we center a narrative just around whiteness.”

In this case, it’s shining a light on one of the darkest chapters not only in American history but also for African American and Black culture, and “what it was to be a part of an affluent, educated, forward-moving community,” Majors says. “We show that and then we show what happened to it, the fact that they were thriving and then they were squelched.”

And while it’s easy to depict the violence and bloodshed suffered by the Black residents of the Greenwood District, Watson says the series wanted to go beyond that. “Tulsa 1921 was a huge talking point, and the most important elements we wanted to show were that the Black community was thriving, also that they didn’t just flee,” he says. “Many of them stood and fought back. It was important to highlight this cinematically.” 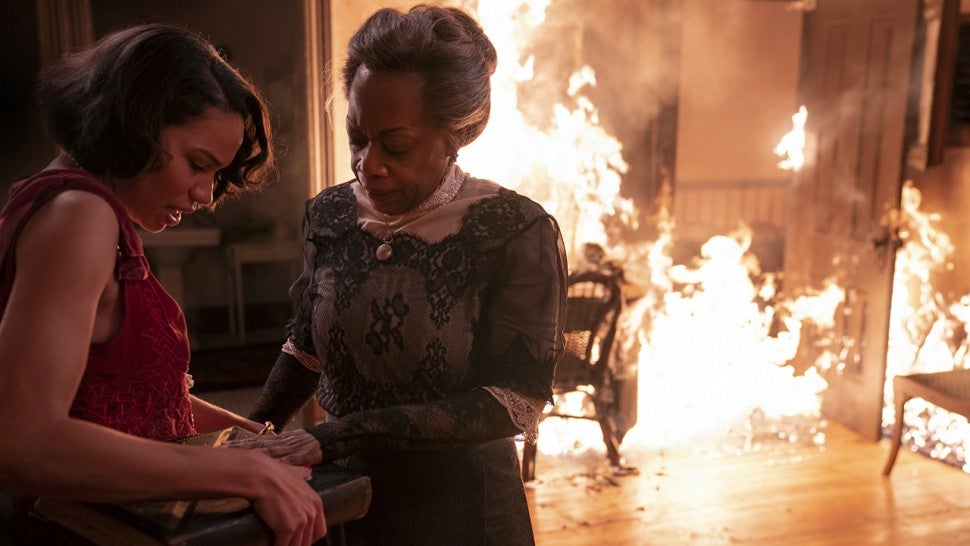 What starts with a beautiful afternoon slowly turns into a dark, fire-filled night as Atticus and Leti have to live through the pain and horror of the massacre unfolding around them while Montrose is forced to relive the suffering of his childhood, which he narrowly survived. The events culminate in a montage of visually stunning moments as Atticus rescues a young Montrose and his friends from a white mob while Leti watches Hattie (Regina Taylor) burn alive after being trapped inside her home, where they had attempted to fortify and fight back.

“There were lots of moving parts to those scenes. Working with fire can be very challenging for all involved,” Watson recalls. “I remember all of the safety precautions that were taken to protect the crew and the talent. There were many layers to those scenes, like the choreography of the fight scene, and the pre-visualization of Leti’s bomb walk as I called it.” The latter is reference to Leti, whose body is protected by a magical spell, walking along a bombed out street in Tulsa as fires erupt and rage behind her. 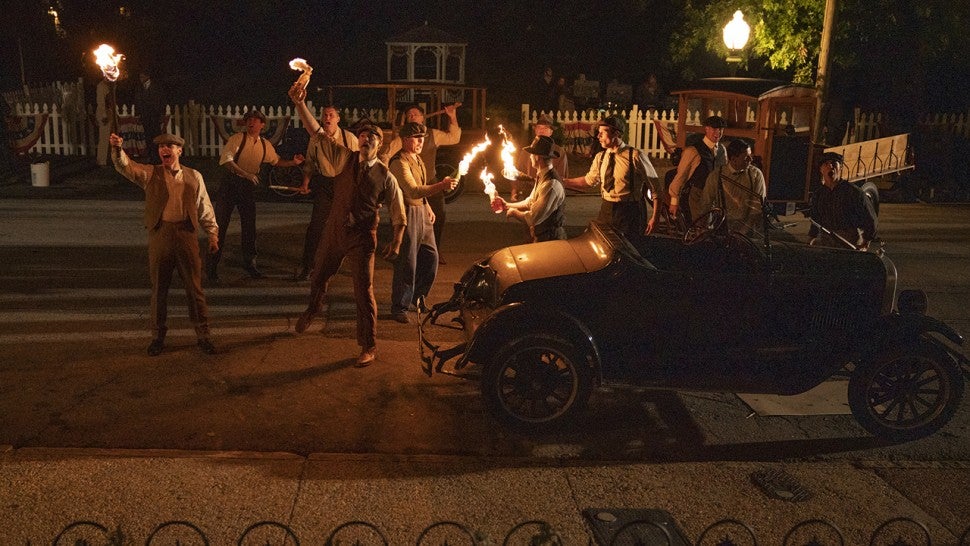 Playing over the sequence is contemporary poet Sonia Sanchez performing “Catch the Fire,” evoking similar moments earlier in the season when Gil Scott-Heron’s “Whitey on the Moon” or James Baldwin’s 1965 speech captured the pathos of the scene. “Where is your fire? I say where is your fire?” Sanchez is heard saying. “Can’t you smell it coming out of our past? The fire of living / not dying. The fire of loving / not killing. The fire of Blackness / not gangster shadows. Where is our beautiful fire that gave light to the world?”

The audio cue is one of music supervisor Liza Richardson’s favorites. “You know how you have to nominate yourself for awards? I hate doing it, but you have to. That’s going to be the episode that I nominate,” she says.

For Williams, however, the success of the episode goes beyond any accolades. It’s about taking the time and responsibility to tell these stories in the first place. “For me, it’s like I hit the jackpot,” the actor says. “I look up to the late great Nina Simone and she always said, ‘An artist’s duty is to reflect the times.’ And what a great opportunity to have this gift and have this platform and to be able to tell this type of narrative in this time.”

Lovecraft Country airs Sundays at 9 p.m. ET on HBO and is now streaming on HBO Max.