Piers Morgan was chosen to hand out an award at last night’s TV Choice Award ceremony and he took his five minutes to jokingly-rant about Good Morning Britain losing in another category.

Taking to the podium to present Lorraine Kelly with an Outstanding Contribution Award, he directed his fury at Holly Willoughby and Phillip Schofield, who have since responded to the crude remark on their show today.

It came after This Morning won Best Daytime Television Show for the fourth year running, an award Piers said was never going to be GMB’s.

“I just wanted to say how thrilled I am for everybody at This Morning. Anyone loves you guys more than you love each other, it’s me,” the journalist stated.

He then went onto impersonate their voices and said; “Love you, love you so much.

“Actually, I don’t love you, I hate you, you snivelling little b******! Every time we come to these things we get told, ‘It’s our time’. It’s never our time, it’s always their time.

The audience responded with laughter, but Piers hadn’t finished and continued to mock the fan-favourite duo: “F*** you and f*** your rules. We’re all part of one big happy family. Are we f***.”

Earlier this morning, Piers appeared on Good Morning Britain alongside co-star Susanna Reid and they spoke about this moment again.

“I was sitting in the front row. I was feeling the nausea rising in my [stomach]. I was thinking, ‘This is the most sickening thing I’ve ever heard in my life’. 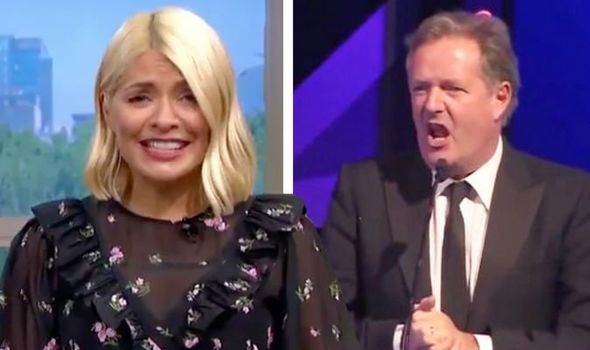 “Plus the ‘We can’t believe it, us, little old us. Winning our 85th award. In the last three months. What a shock. We want to thank everybody’. In the meantime. ‘Love you, love you more.’”

Phillip and Holly responded to Piers during the opening of today’s This Morning.

“We want to start today by saying thank you very much to the readers of TV Choice for our new award,” Holly said.

“We thought today, we’d dedicate this year’s award to Piers Morgan,” Phillip added and the This Morning viewers saw a clip from Pier’s speech play out.

Returning to the studio, Phillip and Holly burst out laughing and Holly was the first to comment: “That was just fantastic!”

“It was brilliant,” Phillip added. “It’s the speech you want to give when you don’t win don’t you?” Holly continued.

It comes after Piers went head to head with Emily Thornberry earlier this morning over Labour’s plans regarding Brexit.

GMB viewers tuned in to see the presenters grill the MP about Jeremy Corbyn and the party’s stance on opposing a general election.

And it wasn’t long before it got extremely heated with everyone talking over one another.