Today on Jeremy Vine’s Channel 5 show, the panel were discussing strikes and wanted viewers’ opinions about whether Christmas strikes should be illegal. The debate comes as the National Union of Rail, Maritime and Transport Workers announced that South Western Railway workers will walk out for 27 days over December in a dispute over train guards.

One caller, Angela from Pembrokeshire, rang in to say a rail strike is acceptable but was shocked by Jeremy’s comments.

Co-host Storm Huntley introduced the caller: “We’re going to speak to Angela from Pembrokeshire saying the train strike are in the best interests of both the staff and travellers.”

Jeremy remarked: “I note that Pembrokeshire is not covered by South Western trains Angela.”

“Well, that doesn’t mean I can’t have a comment,” Angela replied. 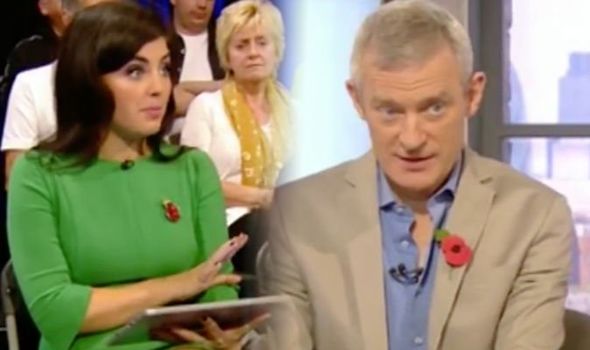 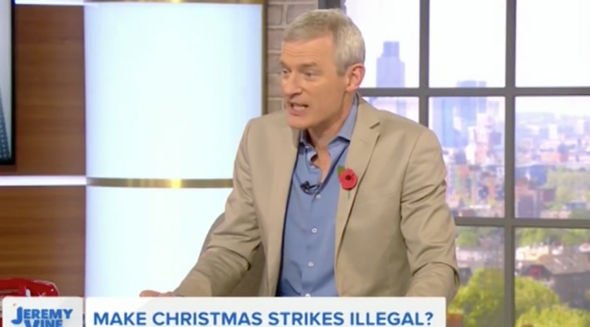 Jeremy added: “No, I didn’t say that to upset you.”

“As you have just said that I am going to put my phone down and I’m going to switch you off because I think you’ve just been extremely rude to somebody who has bothered to pick up the phone to make a comment,” Angela hit back, clearly annoyed by the host.

Laughing, Jeremy told her: “Make sure you it goes down hard.” 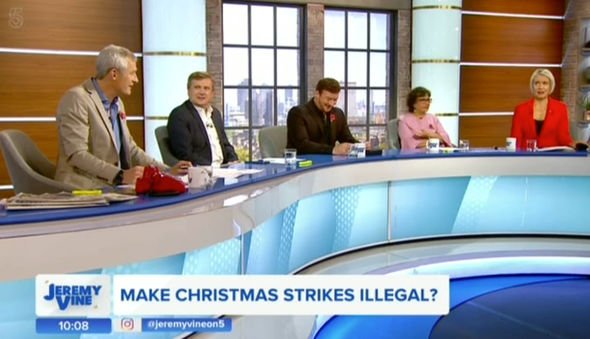 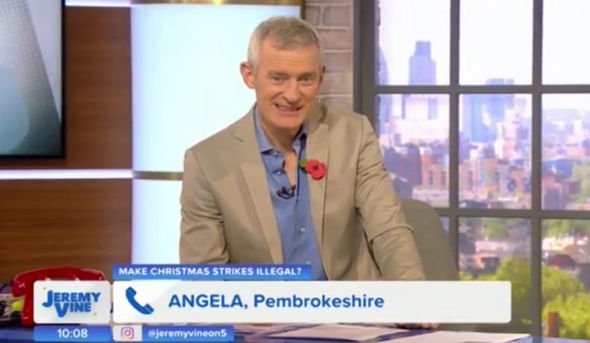 As Angela hung up, Jeremy turned to the panel and asked: “What is happening today?”

“Caller of the week,” Storm remarked.

Turning to the camera, Jeremy added: “Angela, I’m just thinking we’ve got a second before she reaches the TV – I’m sorry!

“Pembrokeshire isn’t in the area, I wasn’t being cheeky was I?”

“I don’t know what’s got in to people,” he continued as the panel looked shocked.

The topic certainly had viewers talking on Twitter with one agreeing with Angela.

They tweeted: “The woman who hung up her phone was sort of correct, you are becoming a bit too rude to you viewers, and on a side note, your panel are all too often heavily female led, it is certainly miles away from The Wright Stuff, it’s not even the ‘nearly right stuff’.”

Another added: “Go Angela from Pembrokeshire! That’s a great way to get your view across – put the phone down and not speak however, yes maybe @JeremyVineOn5 should have saved his comment til she’s made hers.”

Speaking on the proposed strikes, one viewer shared: “The best time to strike is to inconvenience people or nobody takes no notice.

“You didn’t say this about the eco warriors protest should be illegal. It’s to get their point across.”

Another added: “No they shouldn’t if its the only way to make employers to sort out the issues then this is the best way.

“Stop criminalising workers because they have serious issues with employers.”