Donald Trump may have been twirling like a rabid squirrel over on NBC, but on the unique night in America’s challenged democracy, Joe Biden’s town hall on ABC was a display of a candidate in control of himself, the facts, the Constitution, and plans for the future.

In a summation of the night, Biden was asked right at the end by moderator George Stephanopoulos about the coronavirus infected Trump not giving a straightforward answer on NBC to whether he took a COVID-19 test before the first Presidential debate last month. Having seen the second POTUS debate tossed, the Democrat was also asked if he expected the final debate next week to actually occur.

“It’s just decency,” Biden responded, asserting that his coronavirus concerns were less about himself but more “the camera guys” and “the Secret Service.” He also was 100% crystal that he expected to “be there” in Nashville next week.

“It is the presidential responsibility to lead,” the former Vice-President told the ABC New Chief Anchor and a small socially distanced audience at Philadelphia’s Constitution Hall. Biden specifically was spotlighting Trump’s failed COVID-19 policies that have seen over 214,000 Americans dead in the past few months, but the statement of leadership could have been the bumper sticker for the night.

“I got to get the votes,” Biden added of his strategy to get his new tax plan passed if elected. “I have this strange notion, we are a democracy …we need consensus,” the poll leading ex-VP revealed with a small degree of sarcasm, noting he won’t frequently resort to executive orders where legislation falls short.

All in all, spanning a variety of hot topics from the pandemic, vaccines, the struggling economy, racial injustice, police brutality, SCOTUS nominees, transgender rights and his own past record, Biden’s 8 – 9:30 PM ET sit-down with the former Clinton aide and battleground state citizens was very much a look at the kind of Chief Executive the contender may be. Yes, Biden fudged on whether he would pack the Supreme Court and federal courts if sworn in next January, but for the first time promised to unveil his plan before November 3. Long review short: the ex-long time Delaware Senator was long on details, anecdotes and more tonight in front of American voters, live and on-camera.

All of which was good for the Republic and civility less than three weeks from an election from self admittedly long-winded Biden. On the flip side it was kind of dull TV that will likely change no one’s vote at this point.

However, in a programming reality that will likely drive the ex-reality TV frontman crazy, Biden not only mainly ignored his rival, but got the last word as his town hall ran half an hour longer than Trump’s – even staying long after the event was over to talk directly to audience members. Thanks to a pretty hefty looking advertising inventory, ABC may have also ended up making more money off their event than NBC did, which never hurts. 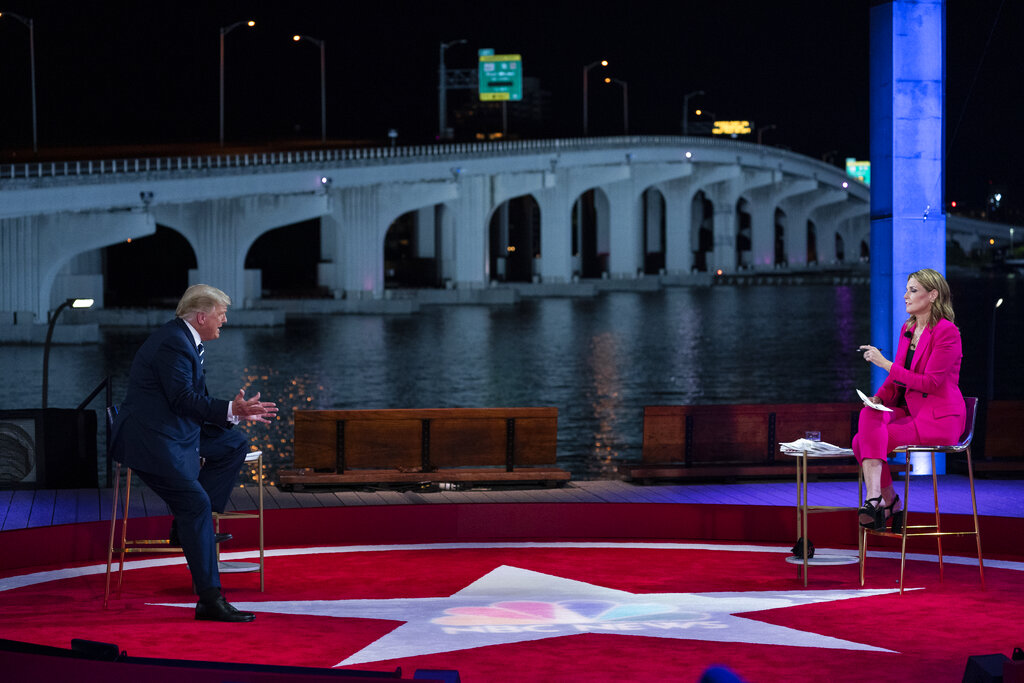 Contrasting the two events watched by two divided aspects of America, Stephanopoulos was more a crossing guard with voters making most of the moves with Biden. Over on NBC, a steely Savannah Guthrie was locked in one of those Trump alternate factfests from the opening minutes in what became more of a rare hard interview than a town hall for the “crazy uncle” incumbent.

That said, the deep diving Biden tomorrow will likely be the loser in the ratings against Trump’s sideshow, which may be a win in the end. Coming off the embarrassment of the first POTUS debate from September 29, it wasn’t supposed to be like this tonight.

If it hadn’t been for the coronavirus denying Trump getting coronavirus, Biden was supposed to be at a town hall with the former Celebrity Apprentice host in front of C-SPAN’s now suspended Steve Scully at the second POTUS direct debate. That face-to-face in Florida was cancelled in early October after Trump refused to participate in a virtual format due to COVID-19 safety protocols. As it is, the mutually loathing Biden and Trump are still set to meet up again right now on October 22, which was the date of their original third debate

First announced back on October 8 after the second schedule POTUS debate fell apart, Biden’s town hall on the Disney-owned net is being directly challenged by Trump back on his old stomping ground of NBC. In a hastily contrived and much criticized town hall of his own, Today co-host Guthrie tried to grill Trump in an event on the Comcast-owned net that became more a one-on-one interview than talking to voters.

Sure, Guthrie pulled Trump out of his protective Fox News echo chamber in the incumbent’s first hard examination in months, but that wasn’t the pitch of the event.

In theory, Trump’s NBC gathering was intended to almost directly replicate the town hall the ex-VP did with NBC Nightly News anchor Lester Holt on October 5 in Miami. Except Biden engaged with voters and answered questions while Trump tonight was mired in resentments and extremist groups.

Obviously in search of ratings, going to head to head with Biden on NBC, with simulcast on MSNBC and CNBC, has all the hallmarks of being an ego ride for Trump In fact, the incumbent actually spent part of the day calling the network “the worst” and mocking its hosts in a blatant move to hype the event. Beyond a bland statement from NBCU News Group chairman Cesar Conde earlier on Thursday after about a hundred Hollywood heavyweights blasted the network for putting on the town hall, NBC never responded to Trump’s attacks.

In the City of Brotherly Love, Joe Biden even confronted the possibility that he could lose the election in one of the last questions.

It was not a query that the former VP likely enjoyed, but he handled it calmly – and that may have made heart on his sleeve Joe Biden the real winner on Election Day and beyond.