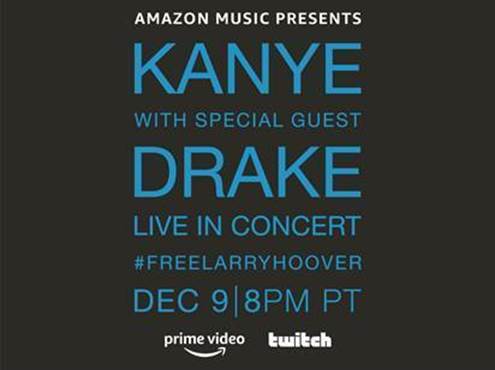 Additionally, IMAX will live stream the concert in select theaters across the United States in an exclusive, one-night-only IMAX Live event.

The benefit concert is dedicated to raising awareness of the need for prison and sentencing reform, and supporting legal reform and community advocates including Ex-Cons for Community and Social Change, Hustle 2.0 and Uptown People’s Law Center.

“We’re extremely proud to be working with Kanye and Drake on this historic concert in support of a cause they are both so passionate about, and to collaborate across Amazon for this epic entertainment event,” said Jennifer Salke, head of Amazon Studios.

Added Steve Boom, vp of Amazon Music, “We’ve built a home for the most important livestreaming events, and seeing these global superstars on stage together will be a can’t-miss event for fans around the world.”

The concert event will be produced by Donda Touring, ITC Entertainment and PHNTM.

Jussie Smollett Says He Was Victim Of $2M Shakedown Along With Attack; Defense Rests