War. What is it good for?

That was some of the to-and-fro on Monday’s Q&A, confirming that 1960s protest songs will never go out of date and nor will the debates they raise. 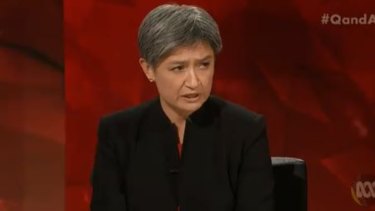 There was the question of a nation’s moral conscience, and when and how it should be deployed.

For those of you who thought a nation’s moral conscience should always be deployed, you obviously haven’t been paying attention. More fool you!

But these are and ever were difficult questions.

On nukes, we had defence expert Hugh White, whose new book argues that Australia should consider adopting its own nuclear deterrent because of uncertainty about the future regional influence of Uncle Sam.

In White’s view, it all comes down to the undeniable authority of China.

“It’s not Donald Trump,” he declared, and thank God something isn’t.

“It’s just the rise of China and its wealth and power and its ambitions to become the leading power in Asia, which makes it seem, to me, very unlikely that America will be able to sustain that dominance.”

Fair enough. But … a nuclear-armed Australia?

White: “Well, at least a very, very serious threat and where we can no longer rely on America to defend us.”

Over to you, shadow foreign affairs minister Penny Wong.

At this, recently traumatised Labor voters heaved a sigh of relief. A swift post-election embrace of nuclear weapons would have killed several hundred thousand party faithful on the spot, and it is apparent the ALP can’t afford to lose the population of a mid-afternoon bus.

But Wong went on: “I think the thing Hugh is grappling with is the right thing to grapple with.”

That would be the new world order comprised of a rampant and alliance-lazy Trump, a wily and insurgent China – and the question of what a middling power like Australia does about it.

White was asked by Jones: if we had nukes, what would the targets be?

The answer, in short and obviously: big cities.

You want to square off with the possibility of bombing Beijing? Wong was certain on this: “I don’t think getting into an arms race with China is a sensible proposition.”

It was a serious debate, but for some fireworks exploding around the same themes – Australia’s role in the world, its influence, and the real-world behaviour of China – you had to wait for the end. 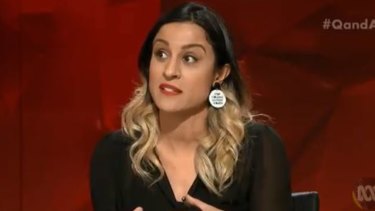 Human rights lawyer Diana Sayed accused the panel of devaluing Muslim lives in their responses to violence against Uighurs .Credit:ABC

On the panel, human rights lawyer Diana Sayed had some challenges, as did a member of the audience.

Aakriti Shoree questioned the fate of a million or more Uighur Muslims interned in China. Was there more Australia could do to challenge violence against an ethnic minority? “Or do trade relations trump our moral conscience?” she wondered.

The panel took on the question – and it ended in a pile-on on Diana Sayed’s contention that Australia could and should go it alone in taking action against China.

Switzer: “How can we be effective and not only be virtuous?”

Wong assured Sayed these matters had been raised “but there is a reasonable question of effectiveness” if Australia acted alone.

Ryan: “The economic impact we took would be virtually zero.”

Sayed: “What you’ve all virtually said on the panel … is that Muslim lives don’t matter.”

Ryan: “The discussion we’ve had is not worthy of that bumper sticker, quite frankly.”

Wong: “I understand your point but I don’t think it was a reasonable proposition to put to us, that somehow certain lives don’t matter.”

Wong: “That is not what I am saying.”

The lesson from the night, on this issue and nukes and other matters: it’s hell being a diplomat.