Naga, 45, was joined on the BBC Breakfast sofa by Charlie, 58, and on the other side of the studio was business reporter, Nina Warhurst. The latter was involved in the earlier part of the conversation, which saw Charlie telling his co-host about a story which had caught his eye in the newspapers on pigs being able to control computer joysticks. However, when Naga made an error about the picture printed alongside the article, the BBC journalist, situated across the other side of the room, called her out for her mistake.

Reading the newspapers, Charlie told his co-host: “I was going to give you a choice, here.

When Naga replied “yes” to the latter story, her co-star added: “Something tells me I know which one. I admire your honesty.”

He then went on to discuss the article in a bit more detail as he explained: “The professor in charge of this, she said the project had changed her view of the animals.

“It’s a project to find out how clever they are. These pigs ere trained to use a joystick to control images on a wall and it turned out they were very, very good at it.

“When presented with video games, the pigs had to use a joystick to manoeuvre a cursor around and there’s a picture.” 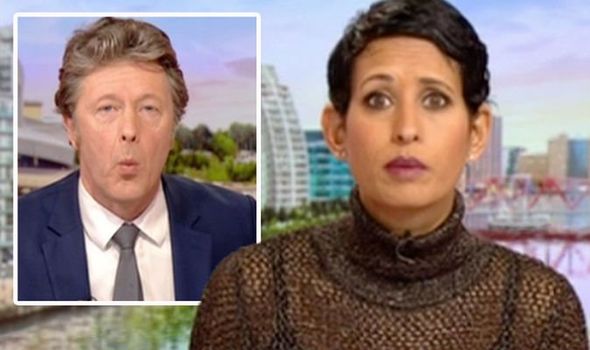 Looking at the picture, Naga said the only way the pigs would have been able to do this is if they used their trotters.

Correcting her, Charlie replied: “No, it uses it’s snout, obviously.”

“I should so know much more than that, shouldn’t I?” his co-host hit back before Nina became involved with the conversation.

The business reporter told her colleague: “How did you not know it was the snout and not the trotter? For goodness sake.”

Should so know much more than that

“I will put myself in the corner and berate myself,” Naga chimed before Nina agreed and added: “Quite right, too.”