A group of Netflix employees will be staging a walkout to protest ”The Closer“ on Oct. 20 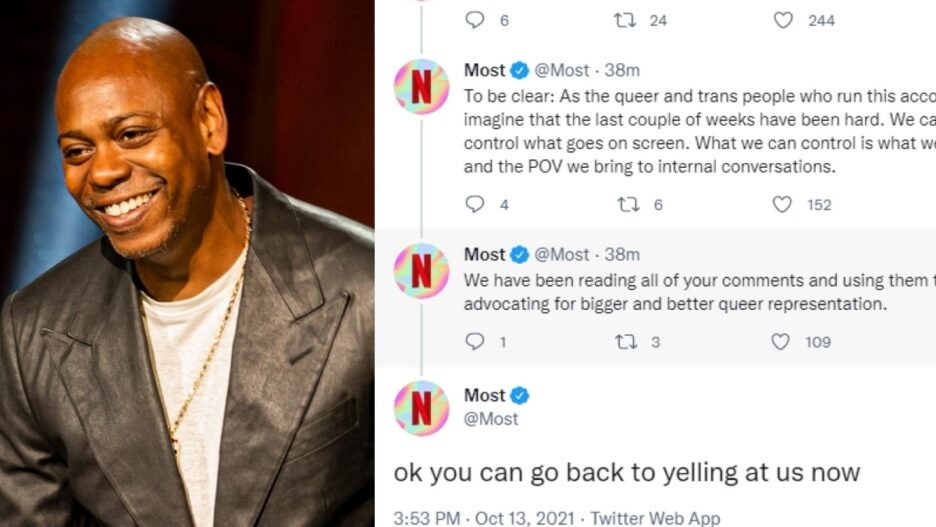 The people running Netflix’s official LGBTQ Twitter account have finally spoken up about the growing backlash against the new Dave Chappelle comedy special, and they aren’t happy. “Sorry we haven’t been posting, this week f—ing sucks,” the Netflix “Most” account posted on Wednesday afternoon.

“To be clear: As the queer and trans people who run this account, you can imagine that the last couple of weeks have been hard. We can’t always control what goes on screen. What we can control is what we create here, and the POV we bring to internal conversations,” the statement continued in a thread.

“We have been reading all of your comments and using them to continue advocating for bigger and better queer representation,” the statement continued. “Ok you can go back to yelling at us now.”

Chappelle’s stand-up special “The Closer,” has been heavily criticized for a lengthy bit about transgender people that included transphobic comments and sentiments. Among the critics are several Netflix employees, including Terra Field, a trans software engineer who publicly criticized the company’s decision to stream Chappelle’s special. Field and two other employees were briefly suspended this week for crashing a director meeting. Netflix reinstated all three employees on Tuesday.

Netflix co-CEO Ted Sarandos defended the special on Monday, writing in an email, “We don’t allow titles (on) Netflix that are designed to incite hate or violence, and we don’t believe The Closer crosses that line.”

The statement from the “Most” account comes just hours after it became public that a group of Netflix employees, including both trans employees and allies, will be staging a walkout on Oct. 20 to protest the new special.