We’ll drink to that: In new images of Grey’s Anatomy’s upcoming “Japril” reunion, the exes make it look like not a day has passed since they were a couple. There’s wine and cheese, smiles and what appears to be a spirited conversation going on. (Wasn’t there always?) 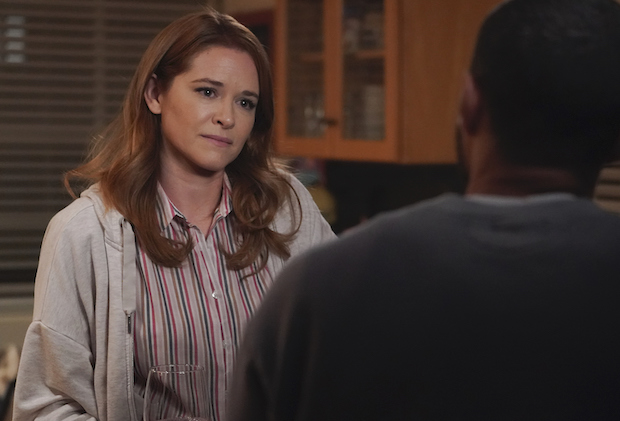 Of course, it’s less likely that Harriet’s parents are reminiscing about bygone days than discussing current affairs. In the April 15 installment of ABC’s long-running drama — whose renewal status remains up in the air — Seattle’s George Floyd protests prompted Jackson to question his mother about why he had never marched for what he believed in. Why, he wanted to know, had writing checks been seen as sufficient? And in May 6’s “Look Up Child” — aka the “Japril” reunion episode — he “pays a visit to his father (guest star Eric Roberts, reprising his role) that helps set him on the right path,” according to the official logline.

Regular viewers won’t need to be told that “Look Up Child” will mark Sarah Drew’s first appearance as April since 2018, when she was let go following a nine-year run. In sharing the first behind-the-scenes image from her comeback in March, she joked that it was no big deal, she was “not excited at all.”

Since Drew’s exit, April has been said to still be residing in Seattle with her and Jackson’s daughter and new husband Matthew (whom you’ll recall she once left at the alter to elope with her now-former husband). You can take a peek at the new photos by clicking on the gallery above. Then hit the comments: Would anyone not like to see Drew scrub back in full-time?