‘Only Murders in the Building’ Review: Hulu’s Handsome True Crime Comedy Is a Dependable Delight

Claiming a show’s location is a character unto itself is, by itself, a cliché. But appreciating how a fully realized city or setting can make or break a series sure isn’t. While period tales and flashy action pieces garner specific analysis during awards season for their accuracy and ambition, far more “traditional” TV shows utilize sets, costumes, lighting, and more to enhance their story’s hospitality factor. Television is an intimate medium, after all, and earning a repeat invitation is everyone’s job. For as much (rightful) attention as “Mare of Easttown” gets for the verisimilitude evoked by its naturalistic Pennsylvania setting, “Only Murders in the Building” merits equal praise for its inventive, welcoming, and altogether immaculate design. Without such critical touches, the comic murder-mystery could’ve easily fallen apart.

After all, Hulu’s 10-episode limited series — created by John Hoffman and Steve Martin — tackles its various genres in unconventional fashion. Starring Martin, Selena Gomez, and Martin Short as three neighbors brought together by their love of true crime podcasts, the series tracks the trio as they start their own audio drama about a possible murder carried out within their lavish Upper West Side apartment building. Dabbling in a parody of the uber-popular nonfiction genre while building its own engrossing whodunit, “Only Murders in the Building” isn’t a straight spoof, nor is it purely an homage; its meta references to true crime’s artists, archetypes, and typical assembly show an earnest appreciation for the podcasts’ ability to ensnare audiences, while still reserving the right to poke fun at many of those traits.

But “Only Murders” isn’t only about true crime. There’s a heartfelt story of friendship in here, featuring clever back-and-forth bits from the legendary comedy partners Martin & Martin. (Side note: Whoever thought to cast Steve Martin as a has-been TV actor and Martin Short as a foolhardy Broadway director deserves serious kudos — the characters can be strangers to each other, which helps the show tease out information about their pasts, but the actor/director dynamic preserves the duo’s good-natured sniping, which they’ve honed so finely they took it on tour. Short giving notes to Martin, and Martin poking at Short’s pretension provide some of show’s the liveliest jokes.) Gomez plays their practical foil (with secrets all her own), and the leads endear themselves to the audience in a way that only serialized television can reward. (I have no way of knowing if “Only Murders in the Building” will extend beyond its self-contained debut season, but it could, given how powerful a draw its essential elements become.) 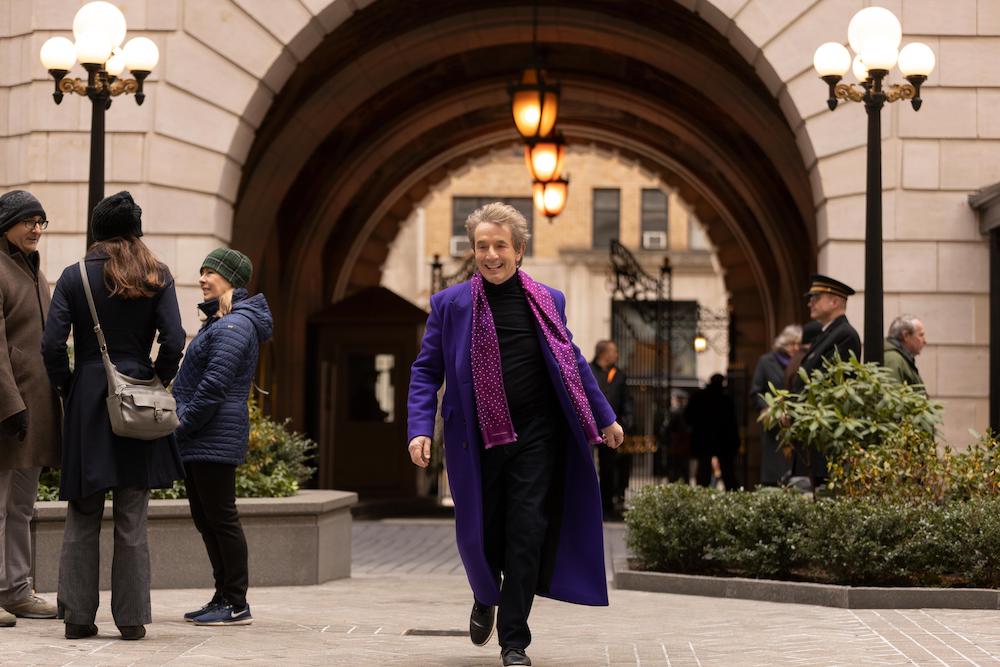 Martin Short in “Only Murders In The Building”

Much of that attachment is a credit to the deft balance of comedy, mystery, and natural development written on the page, but the fact that “Only Murders in the Building” is comfort TV at its most comfortable brings us back to its meticulously constructed world. Most of the action takes place in the “Building” of the title, named The Arconia, a rectangular structure with a large outdoor courtyard in the center. The self-sufficient space immediately invites a communal feeling — like a college campus in miniature — as do early neighborly interactions, like greeting the doorman, introducing the building manager, and shared conversations in the private elevator. Executive producers Dan Fogelman, Hoffman, and Martin realize the potential within their (mostly) insular story, and location manager Collin Smith found ideal Upper West Side landmarks (The Belnord for exteriors and the courtyard, Riverside Drive for select interiors) to fit into their vision.

Adding to the cozy vibes are each of the lead’s exquisite apartments: Charles-Haden Savage (Martin) walks by an elegantly framed and precisely lit poster of his old cop procedural, “Brazzos,” as he moves from one cleanly wallpapered room to the next. Oliver Putnam (Martin Short) flips on his remote-controlled fireplace before flopping in a plush armchair amid a cacophony of theater memorabilia, highlighted by a small stage in his lavish living room. Mabel Mora (Gomez), meanwhile, lives in an unfinished unit owned by her aunt. There’s a bed with plain sheets and a couch with no pillows, but the walls are unadorned because they haven’t been built yet. Courtesy of production designer Curt Beech and set decorator Rich Murray, each space is distinct from the other, tells us more than a bit about the people living there, and make for warmly inviting spaces you’ll want to revisit again and again.

Toss in alluring fall costuming by Dana Covarrubias and “Only Murders in the Building” becomes beguiling beyond its murder-mystery. Every facet is built to make you want to burrow in deeper, stay longer, and return sooner, much like the aural landscapes of great podcasts, except this one has been honed specifically for television. These formal touches, as much as the charming cast and absorbing scripts, strike just the right tone for a genre mishmash that prioritizes enjoyment over everything. You’ll be hard-pressed to resist, and foolish to try.

“Only Murders in the Building” premieres its first three episodes Tuesday, August 31 on Hulu. New episodes will be released weekly.