Home » TV » Out Of All The Vanderpump Rules Feuds, This One Stands Above The Rest

Out Of All The Vanderpump Rules Feuds, This One Stands Above The Rest Bravo wouldn’t be the powerhouse reality TV network that it is today without “Vanderpump Rules.” Unlike the glitzy shows that made Bravo famous (think “Real Housewives”), “Vanderpump Rules” follows the ins and outs of a group of struggling young servers as they get too drunk and fight with each other during themed DJ nights at Lisa Vanderpump’s West Hollywood restaurant.

Over the years, we’ve been blessed with dozens of feuds, giving way to dozens of absolutely iconic reality TV moments. There was the time Lala Kent ate James Kennedy’s girlfriend’s pasta, and James couldn’t handle it. He stood in the middle of the street screaming, “It’s not about the pasta.” Precisely what it was about remains unclear. Then there was the time the group went to Mexico for Stassi Schroeder’s birthday, and Tom Shwartz dumped a beer on Katie Maloney’s head. They are married now because true love perseveres. And we would be remiss if we didn’t mention the love triangle between Kristin Doute, Tom Sandoval, and Ariana Maddix and all the mess that came from it.

Of all the amazing feuds we’ve seen, though, there’s one that takes the cake. Here’s the deal. 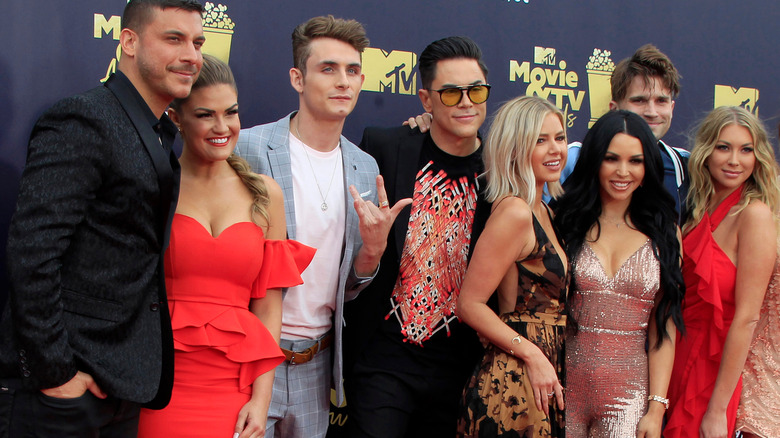 Season 1 saw Jax Taylor and Stassi Schroeder break up and get back together more times than any couple should. The problems started when Stassi heard a rumor that Jax cheated on her and got a woman pregnant during a Vegas vacation. As a result, they broke up, and Stassi barred Jax from attending her birthday party, which also happened to be in Vegas.

Obviously, the whole thing culminated with Jax showing up uninvited and getting into a fistfight with Stassi’s new boyfriend, Frank. The night ended with Jax and Frank chasing each other into the parking lot and taking off their shirts in preparation to fight, which, in classic “Vanderpump” fashion, was at once mortifying and incredibly entertaining to watch. Thankfully they were separated before anything too violent happened.

Stassi and Jax were on and off for the rest of the season until the finale, when he admitted that the cheating rumors were true. Of course, these day’s Jax and Stassi are married to different people and remain good friends. That doesn’t mean she forgot Jax ruining her birthday party, though. In fact, over the next few seasons, especially around her birthday, Stassi often made a point of reminding Jax of his bad behavior that fateful night. One fateful night, “Vanderpump Rules” would never be the same.