Welcome to It’s a Hit! In this series, IndieWire speaks to creators and showrunners behind a few of our favorite Emmy-nominated television programs about the moment they realized their show was breaking big.

Audiences were gobsmacked by how much the actors, particularly James, looked like the real people. For James, her dedication to portraying Anderson accurately was paramount. In a previous IndieWire interview she talked about donning a blonde wig to walk around Hollywood to see how people would react. According to the the series’ creators, Robert Siegel and D.V. DeVincentis, it was akin to James putting on a “superhero” costume, with the actress up before everyone else to have prosthetics applied to her face and get into the part of Pamela Anderson.

Like James, Anderson herself was the fan Siegel and DeVincentis most hoped to impress, they told IndieWire via Zoom. Taking into account the rise of #MeToo and other cultural reassesments of women in the industry they knew they couldn’t just rest on aesthetic similarity, but instead also showcase the important themes that caused such undue stress on Anderson during this point in her life.

Editor’s note: Interview has been edited for clarity.

IndieWire: How did you think people would react to the show when you initially started?

Robert Siegel: This was my first TV project. I come from the indie film world where success is measured in hundreds of thousands of dollars. So I felt like it was a hit, it almost didn’t have anything to do with how the show was received, it was just the fact that it was going to be on a major streaming service seen by — I still, frankly, don’t know how many people have seen it. But I knew that exponentially more people would see it.

D.V. DeVincentis: Yeah, it’s really difficult to know what is going to be ahead, particularly at a nascent stage like figuring out whether or not you want to write something. You’re just really lucky if something that you’re really excited about makes you want to live with it for months, or years, also happens to be something that people are happy to see.

Once the show was out was there a moment?

DeVincentis: The big moment for me was when some paparazzi took a photograph of Lily in the “Baywatch” setting and leaked it. People went absolutely bananas, like it broke the internet. That was when I knew there was an appetite for this, and also that was when I knew the story that we were going to bring was going to land in a certain way. Because our version of the story is not what the public had put together for themselves way back then, so we were going to coast in on the nostalgia with the real story. 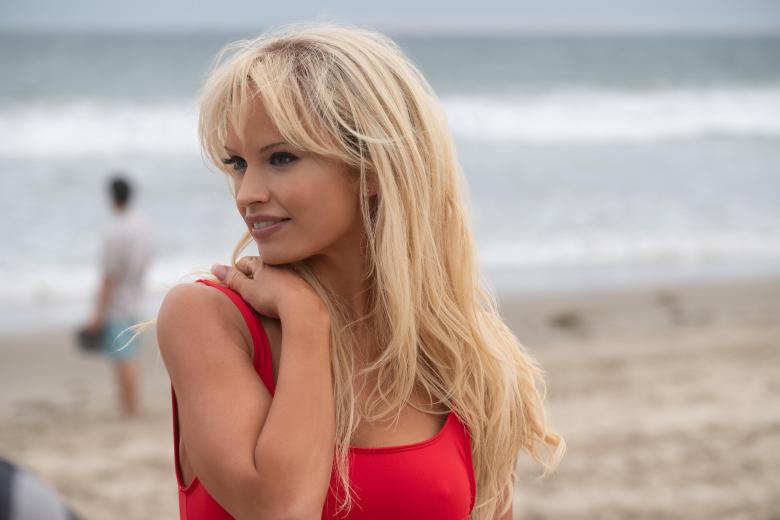 Siegel: That “Baywatch” shot, the paparazzi shot D.V. is referring to, landed the next day on the cover of The New York Post, which as a New Yorker is kind of the measuring stick.

I’d say even before that, the shot of Lily and Sebastian recreating the nipple ring bite went pretty crazy online.

DeVincentis: The first image from the show was we recreated Pam biting Tommy’s nipple ring. And that that went pretty wide on the internet. So right off the bat, it felt like there was a chance that we that we had something that would make a dent in the culture….We were taking those pictures and that was just a moment of fun. They just did it for two seconds and there it was.

What was it like seeing Lily and Sebastian in costume for the first time?

Siegel: Thrilling. And it was doubly thrilling talking to them about it, how much it helped them. Knowing that somebody is going to spend four and a half hours a day in the makeup chair you worry that by the time 7 a.m. rolls around and it’s time to shoot that they’re already going to be drained. 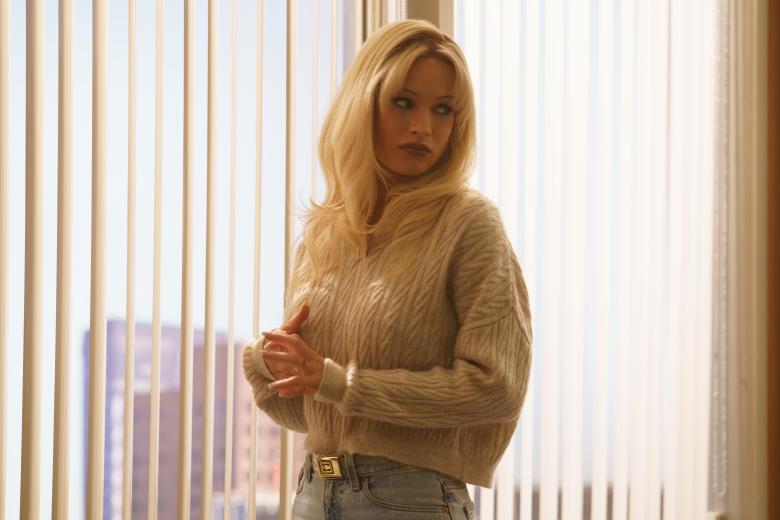 It was like putting on a superhero costume for both of them. Lily, bless her heart, while D.V. and the rest of the crew and I were tucked away in our bed she was already on set getting latex applied. It was grueling, but she’s consistently said that she loved it as an acting tool.

Did you want to keep up on the social media reaction?

Siegel: I was also trying to gauge whether the show was being seen by a lot of people and it’s hard to judge because you could type in any three random words and you’ll get 2300 tweets in the past hour about it.

One of the unfortunate drawbacks of COVID was I was really hoping for some of those randomly overheard things while getting your hair cut or at the gym. I really wanted to overhear people talking about it and then be tempted, but ultimately not, walk over to them and say, “That was my show, by the way.” D.V. what did you hear out in the wild?

DeVincentis: I was getting my hair cut and hearing two women who were hairstylists near me in the hair [salon] talk about how much Lily was like Pam. They broke it down visually really quickly and they were like, “Yeah, that’s all perfect.” But then they started to talk about how she felt like Pam and that just made me so happy. The heart and soul of the show is Pam and the qualities that Rob and I saw in Pamela Anderson, the quiet heroism and the dignity in the face of so much indignity. To hear two people talk about her that way and see that come through was gratifying.

Why do you think we’re now open to reassessing, as a society, our treatment of Pamela Anderson?

DeVincentis: I think the #MeToo movement started [it] off. And that reassessment goes backward into culture with things like the Britney Spears documentary. We were already in process with our show. We already had the themes and ideas, but when that came out that definitely bolstered my confidence in what we were approaching with our show.

Siegel: When I first started working on the pilot — the show actually kind of predates #MeToo when I took my first few meetings about it. I was approached to write the pilot before the whole Harvey Weinstein story broke. I don’t remember the exact chronology, but let’s say midway through writing the pilot we suddenly had this entirely new kind of relevance presented to us. Like, Oh, my God, there’s a huge new theme that just kind of landed in our laps that the show touches on. There was already issues of privacy, and technology, and celebrity there, but the #MeToo aspect of it we backed into. 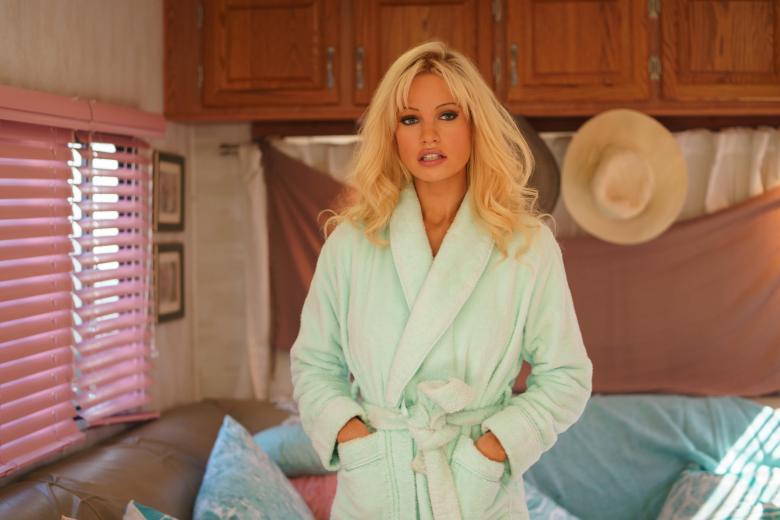 How do you feel about Pamela Anderson coming out and saying she’s doing a documentary with Netflix to tell her story?

Siegel: I’m excited about it! I can’t wait to see. I’m definitely curious about it.

There was criticism about telling this story about consent without having Anderson’s consent. Did you expect those criticisms and how do you react to them?

DeVincentis: It’s a very complicated question, but we were so on her side; she was our hero. She was also our number one audience. It was a story that says so much about the world; it was such a particular moment in time that was more than just their story. It was a story about the birth of so many things, including a particularly virulent strain of bad behavior that we are completely consumed by now. To me, Rand [Seth Rogen’s character] is the original troll.

He’s the original person with no accountability or responsibility without his name involved, to exploit somebody online without any accountability. I was confident of how much we were on her side in that question, and in terms of how that happens to so many people now; it’s like a fever now. We tried every step of the way to reach out to her. We didn’t get any response from her. All the people on the show decided to move forward because we just knew that our hearts were more than in the right place, and we were going to look after it. Honestly, she’s the number one audience and all I wanted every day getting up and going to work was for her to love this. So I hope she does.

How do you look at the rise in the last few years in limited series like this?

Siegel: The types of stories we both like to tell, this is where they’re getting made. Our bread and butter was always the medium-sized movie, or at least that’s where we tried to make a living because you can’t make a living doing the tiny indie movies. That kind of movie was dying and it’s not like it had to be replaced by anything. We had the good fortune of finding these very same types of stories we were interested in telling.

There was this place where not only were they not drying up, they were thriving, and that’s television. They give you creative freedom and they give you lots and lots of room to tell your story. “Pam and Tommy,” as a movie, there just wouldn’t have been the room to properly explore it. I think there are stories that probably are better served as movies. This one benefited from having the space. So that’s been a real godsend.

“Pam and Tommy” is streaming now on Hulu.