Where will Big Little Lies go from here – having exhausted the material in Liane Moriarty's novel? Well, Moriarty has collaborated on the story with showrunner David E. Kelley and there's plenty to work with, purely in the consequences of last season's drama. 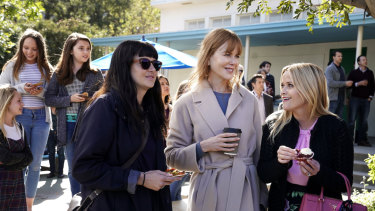 All our favourite characters return in Big Little Lies.Credit:

As the action opens the vibe is the same: bleaker and darker than the novel (and in many ways less subtle, too) matched by the rugged and often gloomy Monterey landscape – so different from Sydney's blithe Northern Beaches. But this is also full of the quirky detail that enlivened Moriarty's book (even if, again, it's bigged up for an American audience).

It's not a bad thing to put the focus more firmly on the dark underbelly of the source material. All our favourite characters return (even Alexander Skarsgard's Perry, in plentiful flashbacks) and Meryl Streep joins the cast, perfect as Perry's scarily affectless mother. Kelley has always been a playful writer too (remember Ally McBeal's giant dancing baby?) and he stretches himself creatively here in subtle ways that add to the suspense without interfering with the action.

And there's always the reminder that while there may be rape, assault, murder, and whatever else this season has in store for us, nothing's quite as terrifying as primary school politics.