I wasn’t quite expecting this, and you probably were not either. But HBO Max’s Peacemaker series is a bit of a blast, considering how polarizing its title character proved to be in 2021’s The Suicide Squad, of which it is spun off.

Premiering Thursday, Jan. 13 with the first three of eight episodes (I previewed five), the antihero-centered superhero series in large part asks: Can the unique style of comic book fare that filmmaker James Gunn turns out sustain itself on an episodic basis, spanning eight-ish total hours?

The answer is… pretty much, though your experience may vary depending on how you personally feel about what Peacemaker aka Chris Smith (played by John Cena) did, and who he killed, on the big screen. (No spoilers here, but rest assured that the HBO Max series series freely flashes back to those divisive moments.)

Peacemaker picks up not long after the events of The Suicide Squad‘s second end credits scene, in which Cena’s character — assumed dead after such-and-such— is revealed to be not just alive but needed to “save the f–king world, that’s all,” per ARGUS agent Emilia Harcourt (played by Jennifer Holland). 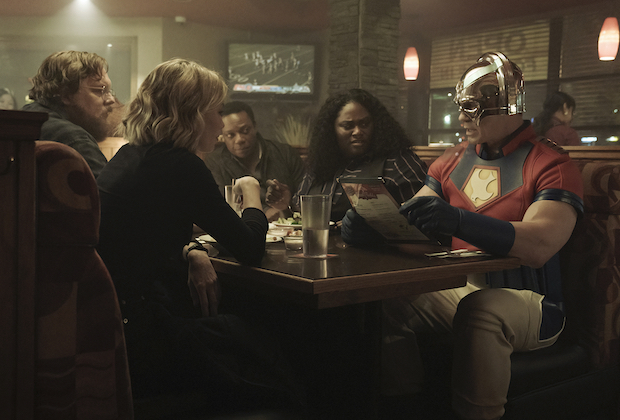 The exact nature of that world-saving is slowly parsed out over the first several episodes, but it has to do with targets dubbed “butterflies.” Peacemaker of course scoffs at that silly moniker — much the same way that ARGUS agents Harcourt (again played by Holland), John Economos (The Suicide Squad‘s Steve Agee), Clemson Murn (Designated Survivor‘s Chukwudi Iwuji) and new recruit Leota Adebayo (Orange Is the New Black‘s Danielle Brooks) gleefully guffaw at his choice of garish get-up.

Filmmaker Gunn wrote all eight episodes and directed five (including the premiere), and his no-holds-barred style is on full display here. The language can get downright raunchy, the insults are crude (and at times racist), the violence is messy, and skin (other than Cena’s jacked torso) is occasionally on display. That makes for a rolicking premiere that mixes a dash of exposition with copious amounts of quips and action. That energy, though, doesn’t (and probably simply can’t) hold up across multiple episodes. As such, the slower, quieter moments here can feel very slow and very quiet, when what you are more likely wanting from this affair is, as in a midseason episode, a rat-a-tat-tat round of ribald banter as the team travels in the back of a van (and which is further escalated by the very accidental sharing of a sexted photo). 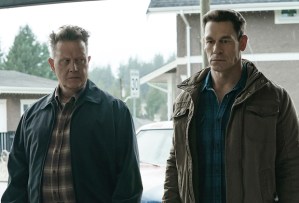 Peacemaker is here in part to relay the backstory of Chris Smith’s chrome-helmeted alter ego, a “vainglorious man who believes in peace at any cost — no matter how many people he has to kill to get it.” To that end, Robert Patrick (Scorpion) plays Chris’ father, Auggie, a white supremacist who finds nothing to celebrate about his son’s life choices. It’s in these scenes, where Chris regularly received Dad’s full-throated disapproval, that we get glimpses at the character’s softer side (as well as peeks inside their house’s improbably expansive secret armory). Luckily, the storyline finds a way to not only entangle the irascible, bigoted Chris, but potentially give him a lot more to do down the road. 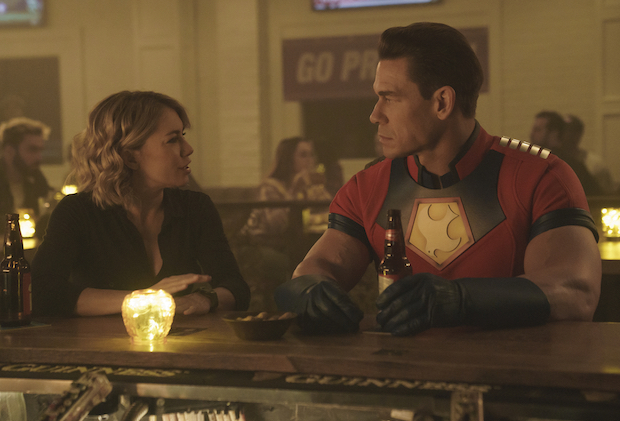 On the “work” front, Peacemaker’s pals are a bit hit or miss. Holland is great as the requisite, icy-cold badass (yes, she gets one of those bar scenes that shows why you shouldn’t be too aggressive in buying her a drink), and she also can chop it up good when the goings get quippy. She and Patrick, meanwhile, are the ones to watch in the very entertaining, song-and-dance opening credits set to Wig Wam’s “Do Ya Wanna Taste It.”

Agee’s Economos, another carryover from The Suicide Squad, is a geeky galoot type we have seen too often before, though Peacemaker’s repeated targeting of him with an inane nickname somehow keeps being funny. As Murn (Amanda Waller’s No. 1), Iwuji is just the right degree of quietly inscrutable, and Brooks pairs nicely with Cena as the one colleague with a potential soft spot for the muscular meathead — even though he is, on paper, -ist and -phobic about so much that defines her. (Brooks’ Adebayo also is given the most interior life of the secondary characters, and it contains at least one surprise that I, at least, won’t be revealing here.) 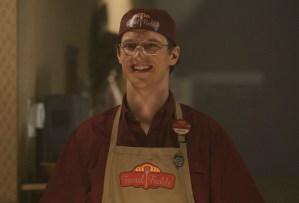 Perhaps the biggest, most interesting casting surprise here is Freddie Stroma as Adrian Chase aka Vigilante, a comic book character who has been reconceived here as… well, as he never has been before. A kill-happy and sometimes whiny dork, he is as far removed as can be from the Dashing Hunk Persona that Stroma previously honed on UnREAL and Bridgerton, and because of that his scenes with his hero, Peacemaker, are a reliable hoot.

As a part of whatever DC is calling its extended movie and TV universe these days, Peacemaker also isn’t shy about directing some of its barbs at its world’s top-shelf heroes, as Chris regularly dishes embarrassing dirt on the likes of Aquaman, Superman and Batman (at least based on what Google has told him). Those wink-winks, though, don’t compare to the genuine comedy generated by larger team debates about, say, why the Riverdale kids can’t be pinned for an Episode 1 murder, and which enjoy extended cuts in end credits excerpts.

THE TVLINE BOTTOM LINE: Peacemaker, if you can stomach the title character’s lunkheaded views (and temporarily forgive if not forget his actions in The Suicide Squad), is a lot of James Gunn fun.