As Piers and Susanna brought up the racy snap which shows Gwyneth posing naked in her garden, the GMB pair began to joke that Susanna could follow suit for her next birthday. The ITV host turns 50 in December but was left slightly red-faced when Piers encouraged her to do something similar to mark the occasion. However, she quickly shut down the idea as she brought up Gwyneth’s daughter Apple’s response to the photo.

Gwyneth’s snap, which has racked up over one million likes in a day, received a rather blunt response from her own daughter.

Apple took to the replies section of her mum’s photo to simply comment: “Mum.”

And it was something which Susanna said may put her off from following in her footsteps on Good Morning Britain today.

Piers kicked off the discussion as he ruffled through his papers and said: “Can we get to Gwyneth Paltrow’s naked body?” 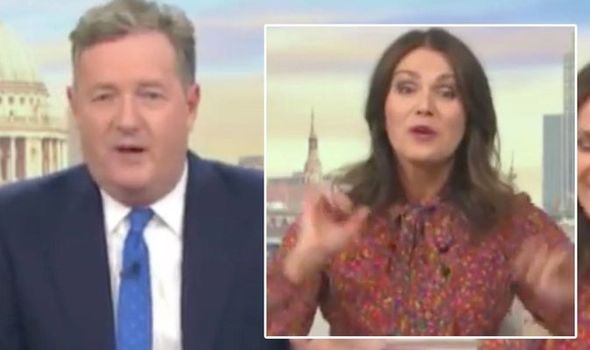 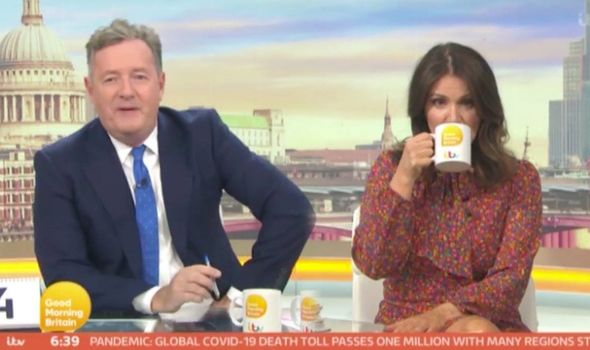 With Susanna keen to weigh in, Piers shut her down as he said: “Whatever you’re going to say, it’s not going to be as good as Gwyneth’s naked body.”

“Gwyneth is naked in her birthday suit,” Susanna added.

“She does look sensational,” Piers commented as a photo of Gwyneth popped up on-screen, before describing it as an “interesting decision.”

Piers then turned to Susanna and news presenter Charlotte Hawkins to see if they would do the same to mark a birthday.

In nothing but my birthday suit today… thank you all so much for the birthday wishes and thank you to @goop ‘s insanely amazing brand new body butter for making me think I can still get my kit off. ������ #goopgenes 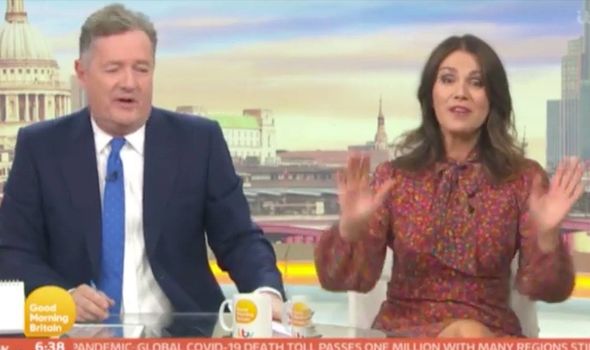 “Yes, I am,” she replied before sarcastically saying: “And I’m going to be 50 in December and it did cross my mind to do that for my 50th birthday.”

Keeping the joke going, Piers said: “Let’s see a Susanna Reid birthday pic at 50 in the all together.”

However, clearly embarrassed by the talk, Susanna took a sip of her drink as her co-host continued to pry.

DON’T MISS:
Andrew Neil hits out at BBC treatment as he admits he was ‘unhappy’
Piers Morgan explodes at Meghan Markle over ‘pulling Harry’s strings’
Andrew Neil shuts down Susanna Reid on why he quit the BBC

Susanna then said how her mind was “drawn to the embarrassment it would cause the children.”

The GMB host read out Apple’s comment, prompting the GMB stars to let out a laugh.

“You can just feel the weight of judgement in that ‘mum’,” Susanna commented.

Piers concluded the conversation by bringing up his own experiences with Gwyneth.

“She is a good laugh in a town full, like Hollywood, full of absolute fake waste-rels, she is a funny person.”

Piers and Susanna will return to the GMB table tomorrow to bring another day of headlines.

Good Morning Britain continues weekdays at 6am on ITV.