Piers Morgan laid into the Remainer MEP after she and her Liberal Democrats colleagues chose to wear bright yellow “B******s to Brexit” t-shirts as they took their seats in the European Parliament on Tuesday. Mr Morgan branded the decision to sport the shirts as “offensive” as he insisted her party cannot “lecture us on democracy” due to their opposition to leaving the European Union. The Good Morning Britain presenter said: “It’s an amazing project this country voted to leave. 17.4 million people voted to leave the European Union.

“The people that are anti-democracy, and I say this as a Remainer, are people like yourself who actually want to ignore the result of the referendum.

“Don’t start lecturing people about democracy because, actually, you are anti-democracy. You want to pretend the people of this country didn’t vote to leave.”

As Ms Vodean tried to hit back pointing out 16.4 million British voters had opted for Remain at the 2016 ballot, Mr Morgan interrupted her to shout: “You lost, you lost. We lost.”

The Lib Dem MEP continued to make her case against Brexit as she insisted the no deal Brexit scenario now looming is not “what people voted for” at the EU referendum. 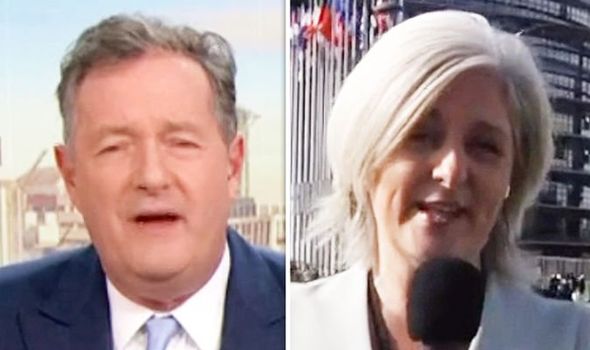 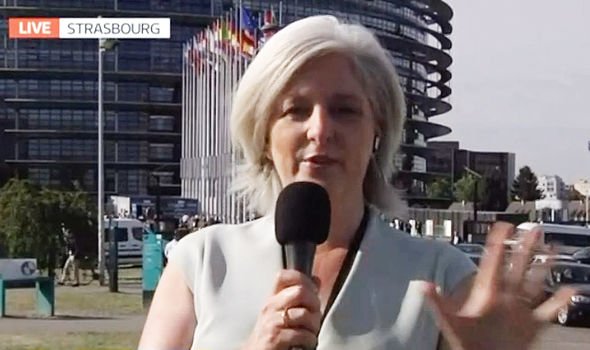 Ms Vodean said: “What we are now being offered by both potential leaders of the Conservative Party is potentially a no deal Brexit, which was not on the table in 2016.

“It is not what people voted for. The phrase no deal was not looked up on Google until 2017.”

Discussing their “B******s to Brexit” shirt stunt, she continued: “As we walked into that Parliament we had colleagues from right across Europe who were clapping with us, who were patting us on the back.

“They were pleased we were there. We were making a point – we are part of this institution and we want to stay.”

The Brexit Party also used the first day of the new European Parliament to send a strong signal to Brussels as MEPs turned their backs to the chamber as the EU’s anthem was performed. 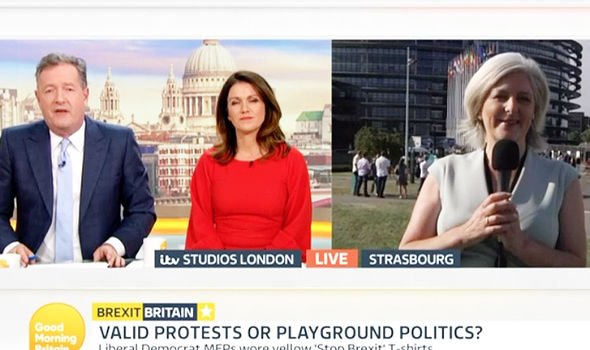 Leader Nigel Farage said standing up and turning their back was a last-minute decision inspired by European Parliament President Antonio Tajani.

Mr Farage said: “Everybody stood up but we sat there.

“At which point, Mr Tajani implored us to do the same. He said look you should stand up for an anthem even if it is a foreign country.

“So he was admitting that the EU as far as he is concerned is a country.

“We obeyed his order and stood and we decided to turn our backs.”

Remainer plot: Dominic Grieve reveals plan to side with Corbyn in face of no deal Brexit
Remainer PM NOT to be allowed near Brexit ‘UNTHINKABLE’ – Express.co.uk poll results
Brexit LIVE: Alarm bells in Westminster as Brexit-bashing EU Army fanatic set for top job 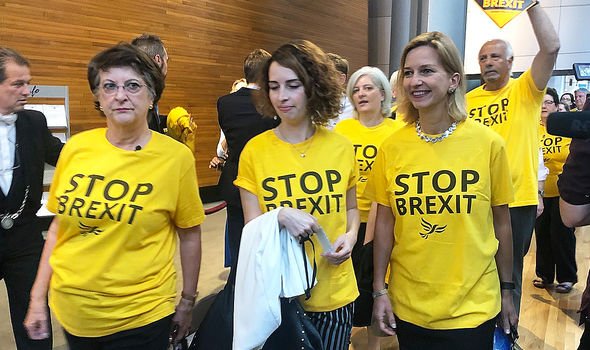 Mr Farage added: “I mean the very idea that we’re actually part of something still that is a country, we’ve never been asked about it and frankly neither has anyone else in the rest of Europe.

“I might not have done it today, but it as him imploring us to stand that made me think – the hell with it, we’ll do it.”

Former British MEP Roger Helmer commended the decision, writing on Twitter: “Having myself been elected (four times) as an MEP on a eurosceptic ticket, and having turned my back on the EU Anthem several times, I salute the dignified, relevant and symbolic protest by @brexitparty_uk MEPs in Straz. The EU must get used to seeing the back of us.”

President Tajani responded by chiding the MEPs, saying: “You should stand for the anthem of another country”.

Match of the Day host Gary Lineker tweeted that the decision to turn their backs was “embarrassingly childish”.

Long-serving Labour MEP Richard Corbett said the Brexiteers “think they’re being clever by standing with their backs to the chair at the opening session”.