One of the most popular Oscar-related annual events returns this year on April 2, but the realities of an exhibition world still transitioning to reopening mean the 2021 Oscar Nominated Short Films program will have both theatrical and virtual components this year.

The two-month delay for the Oscars has allowed ShortsTV, now in its 16th year of presenting the short films nominated in three Oscar categories, to still play in a wide range of theaters. However, with many usual locations still closed, the program will add virtual cinemas along with approximately 350 indoor venues.

That’s down from 536 last year (just before theaters shut down), which was the most ever included. This year, some of the leading grossing locations will not be open (including at least three of the five best grossing locations last year aren’t, although New York’s premier IFC Center is). In place, about 200 virtual cinemas in partnership with theaters will also present this year.

The program has become one of the most successful specialized releases of each year, with the last three grossing over $3 million. As usual, the offering will have three separate packages, one each for Best Animated Short, Best Live Action Short, and Best Documentary Short, with five films included in each.

And as usual, it will include every nominee. This is no easy task, but somehow every year, Shorts International manages to corral all from different sources, ranging from individual filmmakers to streamers and other owners. (One Live Action contender, “Two Distant Strangers,” was just acquired by Netflix.) It isn’t something to be taken for granted.

The effort each year includes trying to get commitments from the initial semi-finalist lists, but every year a few are more last minute. (Negotiations were in progress with Sony Pictures Classics for Pedro Almodóvar’s “The Human Voice,” an unusually high-profile potential nominee. It didn’t make the final five, but SPC has been playing the film in top arthouses with a reissue of the director’s “Women on the Verge of a Nervous Breakdown.”) 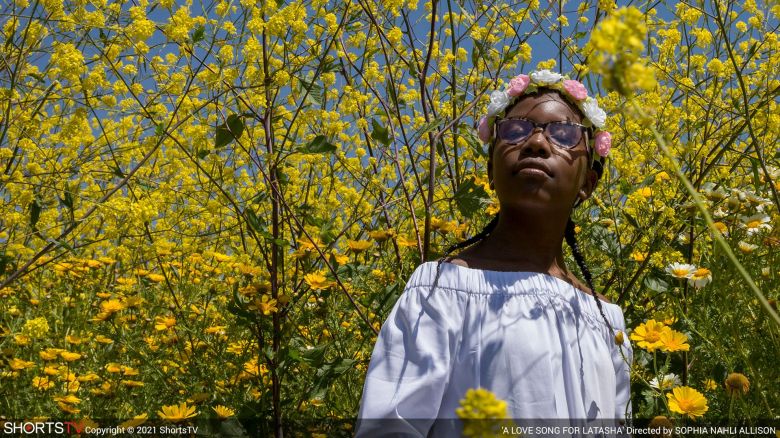 “A Love Song for Latasha”

The virtual price will be $12 per program, or $30 to view all three. At theaters, tickets can be purchased for each showing. Nearly all theaters show the Animated and Live Action shows, with some also adding the Documentary Short program, which usually runs longer than normal feature-film length (shorts, per Academy rules, are up to 40 minutes). For virtual cinema, websites for participating local theaters will have links, or the ShortsTV website can direct those interested to all physical and virtual showings. Video on Demand access, standard in recent years in the days leading up to the Oscars, will start on various platforms on Tuesday, April 20, ahead of the Oscars on April 25 at standard VOD prices.

As usual, the theaters involved will include a range of major megaplex circuits (although far fewer Regal locations, with that chain only starting to reopen) and independent specialized ones. Some bookings remain unconfirmed because of uncertainty when venues will become available.

Like all film grosses, this year’s theatrical portion will likely be reduced. The 2018 and 2019 programs both grossed $3.5 million. Last year was $3.3 million, but came with a major disadvantage of a shortened period between nominations and the awards (February 9 in 2020). The total was actually more impressive even with fewer weeks of play, showing continued momentum for the program. It included the single best weekend’s gross in the series ($1,155,000, #17 at the box office for January 31- February 2). For the truncated year, its full gross was the highest for any film that played in fewer than 1,000 theaters.