Last week, the US Supreme Court overturned the Roe v Wade law, which meant that abortion was made illegal in 26 conservative states. Yesterday, Conservative MP Danny Kruger claimed that he does not believe women have “an absolute right to bodily autonomy”. The Secretary of State minister Ben Wallace joined Susanna Reid and Adil Ray to discuss the comments, which ended in a heated debate, with Wallace assuring that his colleague’s view was a singular one.

Discussing the overturning of Roe v Wade and the comments that Danny made, Wallace commented: “I definitely take the view that it is a woman’s body, her body, and it is…”

However, Ray interrupted and claimed: “Not so long ago, Conservatives were saying there is no room for religion in politics when it came to the Archbishop.

“Now the defence for your fellow Conservative MP’s, well, he is religious…”

Wallace clapped back: “Can I just say I think it is really cheap to try and link one MP’s views to the broader view of a political party.” 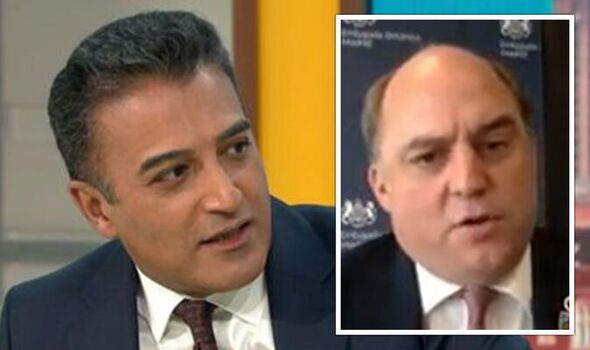 Raising his voice to be heard, Ray added: “He was an elected MP! He had a voice and a platform.”

“There are plenty of people on the Labour, the Lib Dem and the SNP benches who hold deeply held views on abortion doesn’t make it the parties policy on that,” Wallace confirmed.

“You sort of trying to infer this backbench colleague is a Conservative MP, the Conservative Party now doesn’t believe women have freedom over the body, but it is complete hogwash!” Wallace fumed.

Clarifying what he was trying to say, Ray added: “I didn’t suggest for one minute that it was a Conservative Party policy.

“I asked you to respond to your fellow MP’s comments yesterday in the Houses of Parliament.”