Charlotte revealed new statistics that say one in five 18-29-year-olds will either refuse to have the vaccine or are undecided about whether they will have it.

Charlotte said: “So there is a big discussion about whether their freedoms should be restricted, should there be a limit on where they can go if they are choosing not to have the vaccine?”

Richard then chimed in and said: “Well, what do you think about that? Do you think people should be restricted if they don’t have the vaccine?”

Charlotte replied saying that the vaccine also protects others, not just the person receiving it. 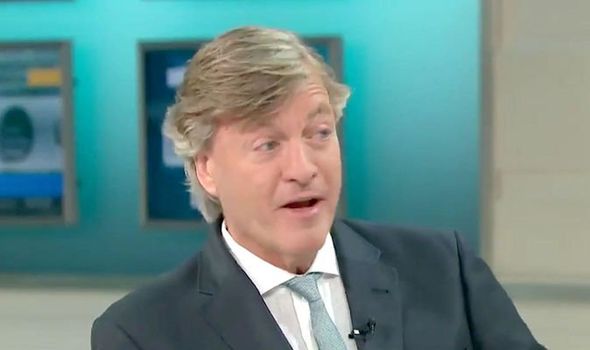 Richard then went off on a very Alan Partridge-style tangent and linked the vaccine to seatbelts. He said: “One of the reasons, for example, we have a law that says we must wear a seatbelt is not just to protect the person wearing the belt, it is because if you don’t wear a belt and you have a high speed crash you could go through the windscreen and hit somebody else!

“That can actually happen!”

Viewers took to Twitter in their masses and the Alan Partridge comparisons poured in. One man said: “The seatbelt going through the window comment is pure Alan Partridge. Exactly the king of tangent (and with the same kind of brutal detail) he goes off on.”

Another joked: “Richard Madeley’s transitioning period is finally over. He is now 100 percent Alan Partridge.”

A third said: “It is impossible to listen to Richard Madeley’s seatbelt analogy without hearing it in the voice of Alan Partridge. Fact.”

Another said: “When you see Alan Partridge trending you just know that Richard Madeley is on GMB without even checking.”

Madeley is the bookies favourite to replace Piers Morgan as a permanent presenter on GMB alongside Susanna Reid.

Madeley says he is yet to be asked to take up the role, but would be open to the position. He has earlier said: “The phone hasn’t rung, I haven’t had a ping into my inbox.

“The bookies have me down as the front-runner and there have been opinion polls where I’ve come out reasonably well, but there’s a huge difference between that and it being a reality.”