BBC Breakfast viewers witnessed a number of guests arrive on screen this morning, as a number of government officials were eager to make their points about the recently announced lockdown by Prime Minister Boris Johnson. Included in this slew of guests was Mayor of London, Sadiq Khan.

Speaking to host Louise Minchin, Khan spoke out about a number of points regarding the lockdown.

However, Minchin went on to bring up the issue of key workers and how they have been kept at work safely.

She went on to ask about people who may have been continuing to attend work, despite not being key workers.

Responding to the question of whether a builder could be classed as a key worker, Khan said: “There has been a difference of opinion – I’ve got to be frank – between myself and the government on this issue. 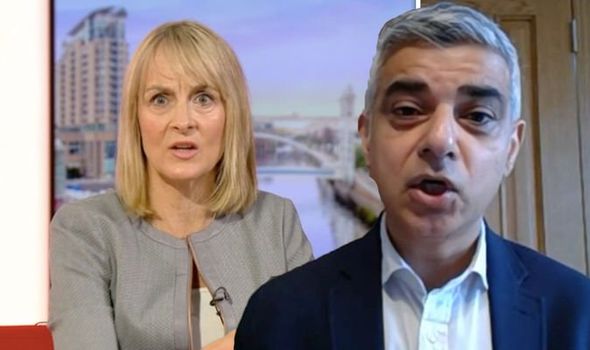 “But I’m quite clear: Only if you really have to go to work, should you be going to work.”

“But here’s the problem,” he went on. “I know, because I’ve spoken to people who are self employed, people on zero hour contracts, people who work in the gig economy, who – unless they work – can’t get money to put food on the table.”

Hitting out about decisions made by Chancellor of the Exchequer, Rishi Sunak, recently, he went on to add: “They face a real conundrum.

“Although I welcome the packageof measures announced by the Chancellor so far, I’m afraid he’s not helping those people.

“The self employed the zero hour contracts, the gig economy – many of them work in construction or other fields – who go to work because they feel obliged, because they’ve got to put food on the table!”

Continuing to speak about the chancellor, he went on to add: “That’s the point I made yesterday.

“It’s really important he announces, as a matter of urgency, a new package of measures which ensures that these people know there will be be money in their pockets, and keep food on the table.”

Later in the interview the Mayor of London spoke out about the new instructions given out by the Prime Minister.

He stressed the importance of these instructions, and pointed out: “It’s important for all of us to realise these rules aren’t optional.

“These rules are instructions to stop the spread of the virus, to ensure fewer people will die. It’s really important for all of us to follow these rules.”

Speaking about locking himself away, he began: “This is my first week. I started self-isolating last Monday and I am managing very well.

“Unfortunately I can’t go and see my friend Nancy but I can call her.

“I don’t want her to think I have forgotten her because I haven’t, she is 91 and I’m ringing the home every week just to say remember me, sending my love and obviously because of the situation I can visit but I haven’t forgotten her.

“I haven’t experienced anything like this, for instance, I was born during the war in 1941 now my mother had three of us.”