Home » TV » Spoilers: Everyone who could die in huge Corrie stunt week

Spoilers: Everyone who could die in huge Corrie stunt week 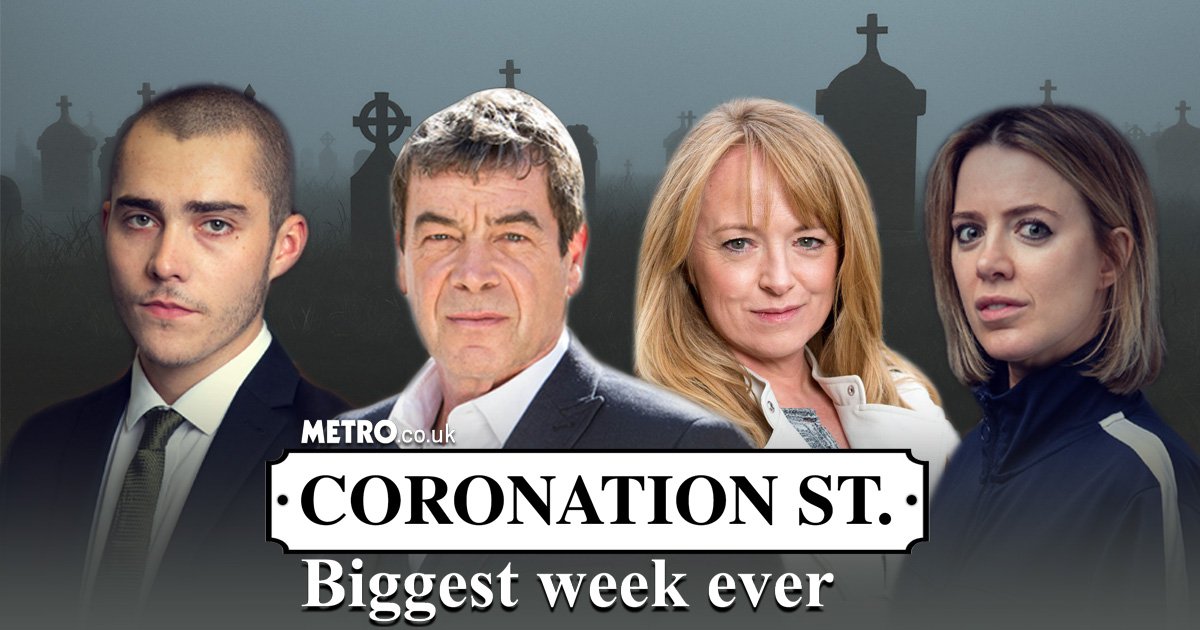 A storm is coming to Coronation Street and residents’ lives are in serious danger.

Weatherfield will live up to its name this autumn when a huge climatic event brings death and destruction.

As real and metaphoric storm clouds gather over the famous cobbles, characters will make plans for Halloween parties and holidays, completely oblivious to the tragedies that lie ahead – including the Platt’s sinkhole.

So, who’s involved? Who will die?

Grieving mother Abi (Sally Carman) has been away from the cobbles for a few weeks after telling Kevin (Michael Le Vell) their relationship was over.

With Abi back on the street, she has one thing on her mind: revenge.

Having got her hands on a gun, she is determined to make Corey (Maximus Evans) pay after murdering Seb (Harry Visinoni).

Pictures hint at Abi spiralling out of control, but will Corey work out what’s going on and kill her first?

There a definite showdown on the way as Abi and Corey will find themselves trapped in the Victorian sewers – suffice to say these scenes will be intense.

‘There is no way Abi can leave it at that,’ explained Sally Carman. ‘She can’t let that go, because the injustice is too much. She has a cut-off point and not only has it been reached, it’s been crossed!’

Murderous teenager Corey Brent has spent the past few weeks wandering around Weatherfield a free man.

With Abi hot on his heels, she certainly won’t stop until Corey pays for what he’s done.

But before Corey’s life is potentially put on the line, new pictures have emerged that see him confronting a busker who spotted him getting rid of the backpack on the night of Seb’s murder.

Will Corey kill again, only for Abi to murder him after?

Dev (Jimmi Harkishin) is someone who will be innocently caught up in this very treacherous week.

Off on their holiday, Dev, Aadi (Adam Hussain) and Asha (Tanisha Gorey) will find themselves lost on a country road.

As the thunder crashes over them, Harvey Gaskell’s (Will Mellor) prison van is also on the same road, heading to the hospital after the drug lord injured himself.

Further pictures have emerged that show Dev in distress with a smashed car behind him, has the storm led to the Alahan’s crashing their car?

If Dev dies, what about Asha and Aadi?

Whatever’s happened, Dev will be forced to make a decision – does he pull Aadi from the burning car, or Asha?

If he chooses one twin, will the other make it out before the car no doubt implodes into flames?

If Asha and Aadi both make it out of the car, who will survive as they head to hospital?

Back on the cobbles, Jenny (Sally Ann Matthews) has spent the past few weeks getting to know Leo, her new toyboy and the person fixing the Platt’s sinkhole.

Problems arise, however, when Johnny (Richard Hawley) announces he wants to leave Weatherfield.

Jenny is keen to speak to Johnny, but as the rain falls, the ground literally opens up beneath her!

Johnny is determined to save her and edges near the giant sinkhole, but can Jenny be saved?

We know Johnny is also set to end up in the Victorian sewers in an attempt to save Jenny, but will they both survive?

If only one of them lives, how will the other cope knowing someone they loved so dearly was taken in such terrifying circumstances?

Harvey is back, so of course Leanne (Jane Danson) is on our list of potential people who could meet their end.

Leanne last saw Harvey during the trial following months of the drug dealer making her and her family’s lives a living hell.

With Will Mellor definitely filming some sort of prison van escape, Harvey will make his way to the cobbles to confront Leanne.

We don’t know what’s ahead for these two but Harvey is a very, very dangerous man – will he get his revenge?

Or will the tables get turned?

Perhaps Leanne will kill Harvey? We’ve seen in the past Leanne is someone who will do whatever is takes to protect her family…will she really go as far as murdering the villain?

Yes, we can speculate the main characters will die – but what if it’s someone completely unexpected?

Perhaps Toyah (Georgia Taylor) – Leanne’s sister – will find herself caught up in the hell that’s ahead?

Or Imran (Charlie De Melo) – the troubled lawyer who was blackmailed by Sabeen (Zora Bishop) – into working on Harvey’s appeal case?

Or maybe even Kevin – Abi’s partner who’s been desperate to help the grieving mother?

Discussing the huge events, producer Iain MacLeod said: ‘We set out to make a week of breathless, brilliant drama – and boy, have our outstanding cast, crew, design team and writers delivered! The week is jammed packed with twists and turns, and astonishing visual spectacle. It also has heart, heroism and humour in the most unexpected places. I have to say it again: our team has excelled themselves.

Making any TV in a pandemic is hard, especially if you’ve been doing it non-stop for over 12 months – so I have to tip my hat to everyone for their tireless efforts in continuing to raise the bar, against all the odds.’