Lucasfilm has added yet another name to its growing list of female leaders: producer Michelle Rejwan, who Deadline reports has been named SVP of Live Action Development and Production for Lucasfilm. Rejwan is already very much in the Lucasfilm and “Star Wars” fold, as she serves as a producer on the upcoming “Star Wars: The Rise of Skywalker,” and was also a co-producer on “Star Wars: The Force Awakens.”

Lucasfilm boasts an impressive number of women in leadership positions: Kathleen Kennedy has long led the production company as president, and she’s joined by a list of other behind-the-scenes women (just look at this lineup of the company’s leadership, a paragon of parity not often seen in Hollywood). And yet Lucasfilm’s marquee property — “Star Wars,” of course — has long struggled to echo that kind of equality in its most visible position: feature film director.

There have been strides made recently, with Bryce Dallas Howard signing on to direct an episode of the upcoming Disney+ series “The Mandalorian” and JJ Abrams (himself a long-time compatriot of Rejwan) choosing Victoria Mahoney as his second unit director on “The Rise of Skywalker,” marking the first time an African-American woman has served in any directing capacity on a “Star Wars” film.

Most notably, screenwriter Laeta Kalogridis is reportedly working on a film trilogy centered around the franchise’s “Knights of the Old Republic,” but that hasn’t been formally announced by Lucasfilm.

Should that project pan out, Kalogridis will join a very small group: the only other credited female writer in the “Star Wars” movie universe is Leigh Brackett, who shared a credit with Lawrence Kasdan on 1980’s “The Empire Strikes Back.” (Beloved star Carrie Fisher is believed to have offered her own script fixes over the years, but no film has included her as part of their credited writers.)

Despite the lack of female directors and screenwriters, the franchise continues to dig into female-centric stories, from the ongoing Skywalker Saga, which initially boasted Princess Leia as a lead and has now been given over to the journey of Daisy Ridley’s Rey, to the “Rogue One” spinoff which followed Felicity Jones as the bold Jyn Erso. And that’s to say nothing of a growing cadre of female supporting characters that pack their own appeal.

Women love “Star Wars,” and they help make it great, but they remain visibly outnumbered behind the camera. The franchise continues to announce new film projects directed by men, as has long been its tradition. New films are in the pipeline from both Rian Johnson (who directed “The Last Jedi”) and “Game of Thrones” masterminds David Benioff and D.B. Weiss. In the streaming world, Lucasfilm has also tapped big names like Jon Favreau and Dan Filoni to shepherd “The Mandalorian” into the fray.

When will a female director being granted entry into that club? 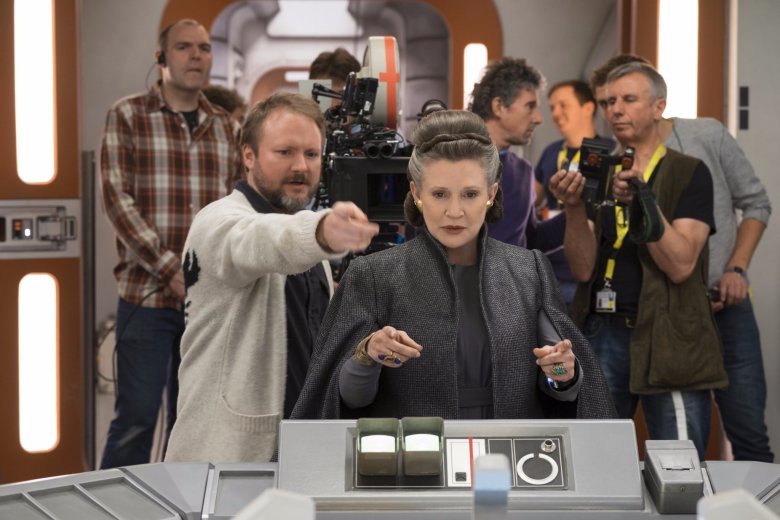 On the set of “Star Wars: The Last Jedi”

Kennedy has repeatedly said that “Star Wars” is eager to tap more diverse talent behind the camera, though the hiring of Mahoney was the first major sign of actual progress in years. In 2016, Kennedy drew ire after a Variety interview during which she told the trade that although finding a female director for one of their features was a priority, the studio “want[s] to make sure that when we bring a female director in to do ‘Star Wars,’ they’re set up for success. … They’re gigantic films, and you can’t come into them with essentially no experience.”

She also added that, because of the perceived lack of female filmmakers with blockbuster experience believed to be essential to making a “Star Wars” film, they were actively looking for appropriate talent. Kennedy said at the time, “We want to really start to focus in on people we would love to work with and see what kinds of things they’re doing to progress up that ladder now, and then pull them in when the time is right.”

In an official statement, Kennedy herself sings Rejwan’s praises, singling out a woman who has grown her work to be up to the task of leading Lucasfilm (and “Star Wars”): “I have seen first-hand her skills collaborating with writers and directors, and I’ve been incredibly impressed with her creative skills and her ability to manage the complexity surrounding these massive projects.”

She added, “I know the importance of building a team that you trust and have fun working with – it is paramount to our success. There’s an exciting momentum building around the future of the franchise, and both myself and the Lucasfilm team look forward to working with Michelle in shaping the future in all areas of story development, from theatrical film development to live action content for Disney+.”

Per Deadline, Rejwan “will oversee a new slate of feature films and episodic series for Lucasfilm and Disney+” and will continuing producing alongside Kennedy as the “Star Wars” franchise is further expanded.

“Star Wars: The Rise of Skywalker” opens on December 20.