Home » TV » Steve Price takes over 2GB’s afternoon show, vows not to be another shock jock

Steve Price takes over 2GB’s afternoon show, vows not to be another shock jock

Price, who has hosted the network's night show for seven years, will now lead the afternoon show on Sydney's 2GB and Brisbane's 4BC as part of a reshuffle of the timeslot in a bid to attract a younger and more diverse audience. 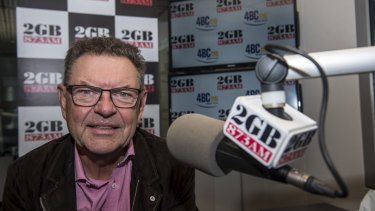 Steve Price at 2GB where he will be taking over from Chris Smith in the afternoons.Credit:Steven Siewert

While Price said he had become more conservative as he grew older, he will adopt a different on-air persona to morning host Hadley and breakfast host Jones who dominate the ratings from the right of the political spectrum. Jones re-signed with Macquarie for another two years in May.

"The older you get the more conservative you tend to be," said Price, who is 64.

"My views when I first started would be much less conservative than they are now. As you grow up and you have children [and then] you're exposed to all sides of politics.

"I'm not as conservative as some of my colleagues."

Is there a lack of female full-time presenters? Yes.

Price, who describes himself as a "commonsense conservative", said he had "great respect" for Jones and Hadley but later added: "I wouldn't have lasted 10 years on [Network Ten's] The Project if I was a right-wing shock jock."

As a panellist on The Project, a host of the radio network's night show and a former contestant on I'm A Celebrity … Get Me Out Of Here! Price said his national profile would bring a broader audience to the afternoon slot that now has an ageing listener base.

"They're paying me more to go to bed early," he quipped. He wouldn't reveal his pay rise but said some of the figures bandied about in the media for radio salaries were "exaggerated".

The Steve Price Show will be on air from noon to 3pm on weekdays and Price will be joined by News Corp columnist and Sky News host Rita Panahi who has been a regular on his nightly show. Nine Entertainment (owner of this masthead) has a 54.5 per cent stake in Macquarie Media and has been looking to buy the remaining shares in the business.

The appointment comes amid reports of tense discussions between 2GB management and its previous afternoon broadcaster Chris Smith, who had been encouraged to take on the evening show. Smith will leave Macquarie on July 31 after negotiations broke down in difficult circumstances.

There has not yet been a decision made about who will host the night program.

The night show is aired on 56 stations, but the afternoon program will be on Brisbane, Sydney, Canberra and some regional stations although not in Melbourne.

Price established himself at Macquarie Melbourne station, 3AW, but will not be broadcast in the Victorian capital.

"I'm sad to have lost the Melbourne audience, I started on radio [there] … it was a management decision," he said. Price said he hoped to return to Melbourne airwaves in the future.

In the meantime, he said he would aim to be authentic on air with his views despite all forms of media becoming "a minefield" for those expressing opinions.

"You've just got to have a layer of commonsense over what you're saying. If I have a strong opinion I'll express it but in a polite manner, I won't belittle anyone.

"If you double check yourself every time you open your mouth you're going to be very boring."

Price is also hoping to attract more female listeners, saying that he has seen a growing focus on gender diversity since starting his radio career in 1987.

"Is there a lack of female full-time presenters? Yes," he said.

"Monday week my main first hour will be co-hosted by Rita Panahi," he said. Other high-profile women are expected to come on air regularly as guests. Sources close to the network said Panahi was considered a strong candidate for a potential future hosting role.

"Percentage-wise in terms of of air time, it would be heavily loaded towards female opinion," Price said.

"We want to make afternoons more contemporary, younger, quicker, faster and a bit more fun. Times have changed and the digital age means everyone has a crowded plate of [media options]. You have to do stuff that is a bit different."

Macquarie Media chief executive Adam Lang said Price had a strong appeal with diverse audiences, from tradies to parents who would be tuning in during the early afternoon.

"If we didn't have Steve Price in our stable, I'd be going for him for this job. That's how strongly I feel about how right he is for this. He's a delight to work with and … continually surprising," Lang said.