The Bachelor Season 25 Premiere Recap: Love Comes in All Flavors After 25 seasons and nearly 19 years on the air, The Bachelor kicked off its latest season Monday night with the first eligible Black man to ever look for love on the beloved ABC series.

Matt James, a commercial real estate broker, says that after spending too many hours alone quarantined during the pandemic, he realized it was time to share his life with someone.

To help him find the right stay-at-home soulmate, producers wrangled up 32 Black, white, brown and Asian women from all walks of life. Despite the inclusiveness of the contestants, Matt, 28, says he feels a lot of pressure to pick the right woman for cultural reasons.

“People want you to end up with a certain type of person. I get that,” Matt tells host Chris Harrison at the start of the show, before the ladies arrive. “My mom is white and my dad is Black, and I experienced what it was like to be a product of an interracial marriage.”

Unfortunately for James and the nearly three dozen women on this incarnation of The Bachelor – and for that matter, in every season – disappointment and rejection are a given. Dude can’t choose them all. He did however seem to have a connection with some contestants more than others. Early frontrunners include Khaylah, a 28-year-old healthcare advocate who, like Matt, hails from North Carolina. Khaylah grabbed Matt’s attention by pulling up in a pickup truck and later having a picnic for two in the cargo bed.

Meanwhile, Kaili, 26, a hostess from Chicago, caught Matt’s eye by showing up in lingerie and asking the former college basketball star to pick one of two dresses she had hanging on a rack.

The gaggle also included a woman in goat slippers (Saneh, 25, an IT consultant from Denver) and another delivering a pizza (MJ, 23, a hairstylist from Ohio). 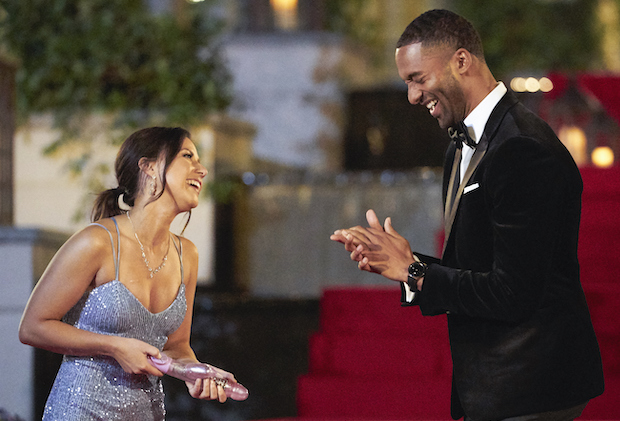 Katie’s pet Rabbit got blurred out on TV

But in the end, the First Impression Rose went to Abigail, 25, a delightful and dimpled Oregon native who was born deaf and works in finance. After a deep conversation about being vulnerable, the two kissed and Matt gave her the coveted flower. And there were more roses to be delved out as Matt chose 23 more contenders including Victoria (Seriously? Can you say “the producers’ choice”!) and Bri, a communications manager from San Francisco who is also biracial.

What’s your early take on Matt, who was of course a contender on the most recent season of The Bachelorette, and his early picks?