With the pandemic causing a slowdown in production, there’s an opportunity for already-shot shows from across the pond to fill the gap. Adapted from the novel by Cecil Day-Lewis, “The Beast Must Die” is an intense and reflective tale of grief, vengeance, and privilege that’s as impossible to stop watching as I’m sure the book itself is to read. Anchored by Cush Jumbo and Jared Harris’ indomitable performances, the addictive import could even fill the void left by other crime dramas like “Mare of Easttown.”

Frances Cairns (Jumbo) details her intentions in the opening minutes of the series: “I’m going to kill a man.” She doesn’t know who the man is or where he lives, but his days are numbered. Said man ran over her six-year-old son, Marty, in a hit-and-run, leaving Frances to pick up the pieces of a life left utterly broken. Having received a letter that the case has grown cold, Frances confronts the new chief of police for the Isle of Wight, Nigel Strangeways (Billy Howle).

Like Frances, Strangeways is also dealing with grief. His predecessor has killed himself and Strangeways suffers from PTSD due to an yet-untold traumatic event. When he meets Frances, he’s struck by how cold and callous he can be. He literally feels nothing and is shocked that a woman who has lost her child is able to feel at all. This crossroads puts the pair on separate paths to achieve the same aims: close a case and, hopefully, gain some resolution to their own damaged spirits.

Series creator and screenwriter Gabby Chiappe and director Dome Karukoski form a series that’s contemplative when necessary while never devolving into being cold or overly artistic. Frances gets fleeting glimpses of little Marty, but never so much that the audience assumes she’s mentally deteriorating.

Too often in shows about women losing children, they’re four-hanky melodramas. Here, with Jumbo in the lead, the character skirts the line between justice and revenge, never entering “Killing Eve” territory, but staying away from telling another tragic tale of what women do when their children pass.

It cannot be overstated how amazing Jumbo is in the role. So much of her plan requires a sense of manipulation, starting with her ingratiating herself into the life of young model, Lena (Mia Tomlinson), who might yield a lead toward Marty’s killer. Jumbo always maintains Frances’ sense of humanity — this woman wasn’t a killer before, after all — so while she’s trying to get Lena to give insight into her life (and the people in it), Frances also hopes to help this girl who’s obviously holding some dark secret of her own. 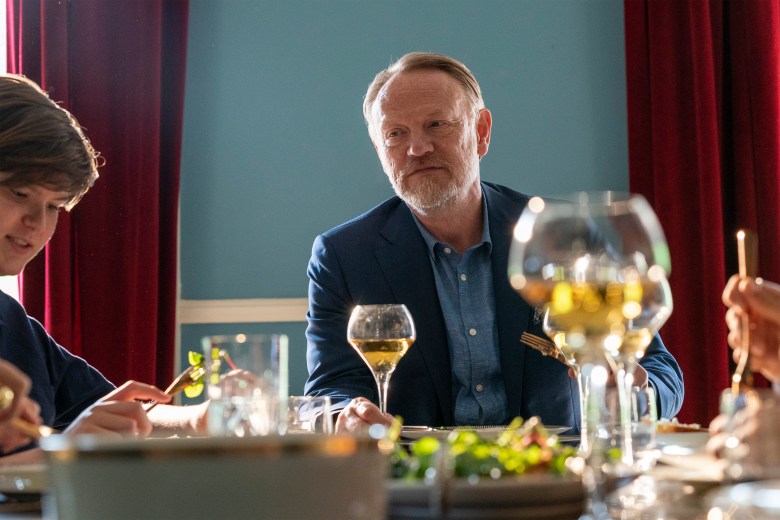 “The Beast Must Die”

The core of the series’ intrigue comes when Frances finds herself staying with Lena’s sister, Vi (Maeve Dermody) and brother-in-law, George Rattrey (Jared Harris). Frances has been given every indication that George is her son’s killer, and it’s easy to see why — at least for the audience, who are most likely familiar with Harris’ past stints as a villain. This could be the moment the series jumps the shark as it’s all but stamped on the character that he is who Frances thinks he is, but instead it’s where “The Beast Must Die” becomes addictive.

The Rattrey’s are members of that grand tradition of television families: incredibly wealthy but suffering internally, each and every one. Violet is sickly, quiet, and meek; George is entitled, rude, and lecherous; their young son, Phil (Barney Sayburn), is fat-shamed by his dad on a constant basis, and George’s sister, Joy (Geraldine James), rules over everything with an iron fist. The series revels in showing this den of snakes constantly snipe at each other, with Frances on her own mission to find out what makes the family, especially George, tick.

Honestly, watching Jumbo and Harris verbally dance around each other is half the fun. Both characters are playing roles that constantly shift based on what we, the audience, believe each knows about the other. Jumbo keeps Frances on tenterhooks, holding in a shudder or gasp whenever George is nearby. Harris, to his credit, makes George just as charming as he can be. The character is a horrible person, all that we’ve come to expect from a privileged white guy, and yet it’s easy to see how he’s kept people wrapped around his finger.

With all the power being driven to this plotline, it leaves poor Billy Howle’s journey as Strangeways feeling like an afterthought. Because the character is on the fringes of the main narrative, it’s hard to truly connect with him, which means much of his plotline has to compete to have merit. The emphasis on his PTSD, his inability to connect with people, and the tragedy he witnessed are all there, but they don’t seem to pack the same punch as Frances’ narrative, maybe because everything just seems to bounce off him. Howle’s solid as the straight man trying to keep up with what’s happening, but he’s completely overshadowed.

“The Beast Must Die” is a must-watch for the amazing performances from Cush Jumbo and Jared Harris. The finale wraps things up a bit too quickly to keep in line with British shows penchant for short seasons, and Howle feels like a third wheel, but if you’re hoping to indulge your crime urge, this will more than satisfy the craving.

“The Beast Must Die” premieres Monday, July 12 at 10 p.m. ET on AMC. Episodes are already streaming via AMC+.