Asif, Emily, Russell and Sophie were the four The Chase contestants joining Bradley Walsh on the ITV show this evening. All four hoped to pocket some cash but faced a tough task in the form of quizmaster Jenny ‘The Vixen’ Ryan. And the Chaser was in fine form, dismissing of first player Russell with ease, but Asif managed to make it back to the Final Chase – although he couldn’t resist a joke at Bradley’s expense which led to a hilarious walk-off.

Asif’s final question of his round was put to him by Bradley as he quizzed: “Which of these countries has not provided a Ubited Nations Secretary General?”

The possible answers were Peru, Philippines and Portugal, with Asif correctly opting for Philippines.

Bradley then flexed his own general knowledge muscles by asking Jenny who the current person was in the position.

As Jenny gave her answer, Bradley was quick to pull the Chaser up on her pronunciation. 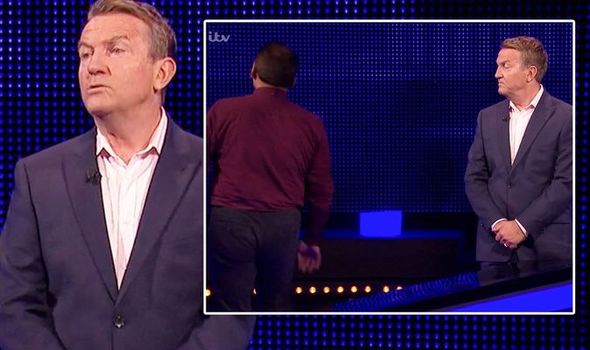 He detailed to Jenny how to say his name correctly before explaining how he knew the tidbit of information.

“He drinks at my local restaurant,” Bradley explained to the Chaser and contestant.

However, he clarified: “When I say mine, I don’t mean I own it.”

Jenny let out a chuckle at Bradley’s comments before Asif spotted the opportunity for a joke.

“You just serve there, yeah?” Asif swiped, prompting the Chaser to giggle.

However, feigning his dislike for the joke, Bradley sarcastically hit back: “Yeah, I do serve there. Funny.”

Trying to escape the tension, Asif then turned and decided he’d walk off away from the table and return to his seat – without Bradley telling him to do so.

“I’ll go, shall I?” Asif joked as he turned away leaving Bradley dumbfounded.

As he returned to his seat, Bradley gave up the act and let out a laugh that Asif had decided to take matter into his own hands and walk away.

“through to the Final Chase, Asif. Well done, mate,” Bradley said as he applauded the player.

With £5,000 now in the prize fund, Asif waited to see if either of Sophie or Emily would be able to join him.

Sadly for Emily, she was caught by Jenny after opting for the lucrative top off but Sophie did make it home with another £6,000.