The Grand Tour season 5: Richard Hammond speaks out on ‘problem’ with upcoming episodes Richard Hammond joined Susanna Reid and Adil Ray OBE on Good Morning Britain today. He spoke about his new TV show – restoring classic cars – as well as The Grand Tour and when it shall be returning to Amazon Prime Video. The presenter said another season was unable to happen until “touring” could resume, but teased a new special episode.

Susanna began: “I said ‘What’s happening with The Grand Tour’ and you said the keyword is?”

“Tour, that’s the main problem,” Richard replied. “It has been a bit difficult, but we are continuing to explore what we can do.

“Actually, we have done, but I can’t talk about it at length now because somebody will shout at me somewhere, but we have done a few local, UK based ones and they’ve been great fun and we’re really pleased about them.”

“We know about one, wasn’t there a parking incident?” Adil added. “You were parking up – we’ve got a clip of this.” 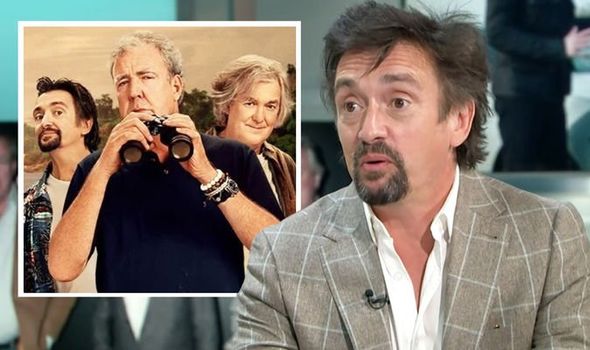 The video showed Richard tried to parallel park a car in a space on the road.

He was shooting for the latest series of the Amazon Prime Video show and was captured by a Crickhowell, Wales, local.

The car expert was trying to park a maroon Renault people-carrier into a tiny space.

When his first attempt was unsuccessful, Richard bumped the car in front and behind until the car fit.

Those passing by called the police as the incident unfolded, but soon found out the authorities had been pre-warned filming was going on in the area.

One witness told WalesOnline: “It was a terrible piece of parking.

“But just the thing a lot of us would like to do when you can’t find a space big enough.

“The three cars involved were all quite old so it wouldn’t have caused too much damage.”

After parking the car, Richard got out of the car and sauntered away as if nothing had happened.

The Grand Tour will keep on rolling in 2021 despite lockdowns, travel restrictions and numerous spinoff shows for the presenting trio.

In late summer 2020, the team managed to shoot a special in Scotland and it seems they’ve been busy filming other specials should Richard’s tease be correct.

The official The Grand Tour Twitter account recently hit back at fans asking for the next special.

In February they wrote: “Let’s play the yes, no game. Yes, the next Special will come out later this year.

“No, we don’t know when. Yes, we went to Scotland.

“No, there’s no more information currently. Yes, we will update you when we know more. #TheGrandTour”

Then this month, they asked their 817,1000 followers: “What should our new bio be? And no we will not be accepting ‘when is the new Special out.’”

Joking, Prime Video Netherlands replied: “When is the new Special out?”

And DRIVETRIBE said: “How about ‘When ‘ the new special out.’”

One fan commented: “‘Days since last Richard’s Hammond crash:’” And TGT Twitter replied: “Fun fact, you are never more than 74 days away from Richard Hammond crashing a car.”

The Grand Tour season one to four are available on Amazon Prime Video now.