It’s not a Reba revival, but it’s the next best thing.

Lifetime on Wednesday announced that Reba McEntire‘s The Hammer, a new original movie co-starring Melissa Peterman (fka Barbra Jean), will premiere Friday, Jan. 7 at 8/7c. The cable network also released a new trailer, which you can watch above.

As previously reported, the project reunites McEntire and Peterman nearly 16 years after Reba ended its run on The CW. The made-for-TV movie is inspired by the life of traveling circuit judge Kim Wanker, and casts McEntire, also an executive producer, as Kim Wheeler, “an outspoken, firecracker lawyer who is appointed Judge of the 5th District of Nevada.”

Peterman, meanwhile, plays Kim’s sister Kris, the local brothel owner who becomes a prime suspect in the murder of Kim’s predecessor. The sticky situation forces Kim to “work even harder to make certain that appropriate justice is served,” according to the official logline. 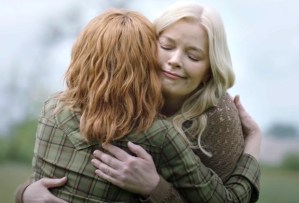 Reba first premiered on The WB in 2001, running for six seasons (and 125 episodes) through 2007. The series told the story of Reba Hart, a single mom who worked too hard, who loved her kids and never stopped after longtime husband Brock left her for his dental hygienist, Peterman’s Barbra Jean. Over the course of the series, Reba warmed to Barbra Jean despite her best efforts to keep Brock’s second wife at an arm’s length — something that proved all the more difficult once Brock and Barbra Jean bought the house next door.

Will you be tuning into Reba McEntire’s The Hammer? Watch the trailer, then let us know in Comments.