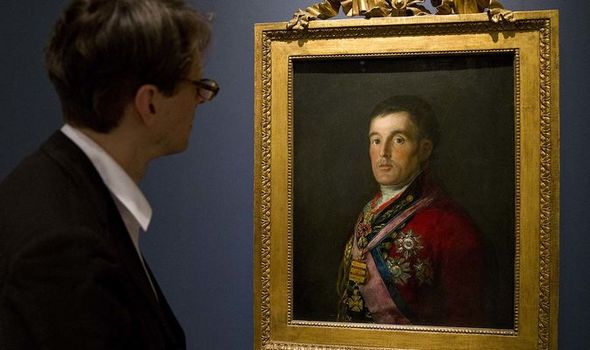 Kempton Bunton took the painting by artist Francisco Goya in August 1961 and said he would only return it if £140,000 was “given to charity”. The Newcastle taxi driver, 57, particularly wanted the money spent on free TV licences for the elderly. But his plan failed. The 19th Century portrait was later discovered in a railway station locker in Birmingham.

Bunton, who died in 1976, handed himself into police and was jailed for three months. His lawyers successfully argued he had never intended to keep the painting so he was only convicted for stealing the frame.

To prove he had the artwork, Bunton’s handwritten ransom note described the painting in great detail, including “a couple of scratches at side”.

Explaining his motive, he wrote: “The act is an attempt to pick the pockets of those who love art more than charity.”

It was painted following Wellington’s victory at the Battle of Salamanca in 1812 and is still on display at London’s National Gallery. The ransom note is held at the gallery’s research centre.

Other documents released include a reward notice from the Metropolitan Police and a statement from the gallery following the ransom demands.

The theft was referenced in the 1962 James Bond film Dr No. The portrait is seen hanging in the villain’s lair, to suggest he stole it.

And it is still capturing the public’s imagination today. New movie The Duke, starring Jim Broadbent as Bunton and Dame Helen Mirren as his wife Dorothy, is set for release next year.

Director Roger Michell said: “It’s amazing to think this painting was once hidden at the back of a wardrobe in Newcastle.

“It’s a story that provides much laughter (and a few tears). There’s also a delicious twist that I can’t wait to share with the public when the film is finally in cinemas next spring.

“In the meantime, enjoy Goya’s painting as it was meant to be enjoyed ‑ hanging on the wall of the National Gallery.”