'The View': Meghan McCain Loses Her Chill with This Ana Navarro Joke

Meghan McCain is not afraid to express her emotions on The View and that has led to some serious arguments. One co-host that she seems to have a contentious relationship is with Ana Navarro. The two Republican panelists were once again together and it didn’t take much for McCain to get distraught by one of Navarro’s comments. 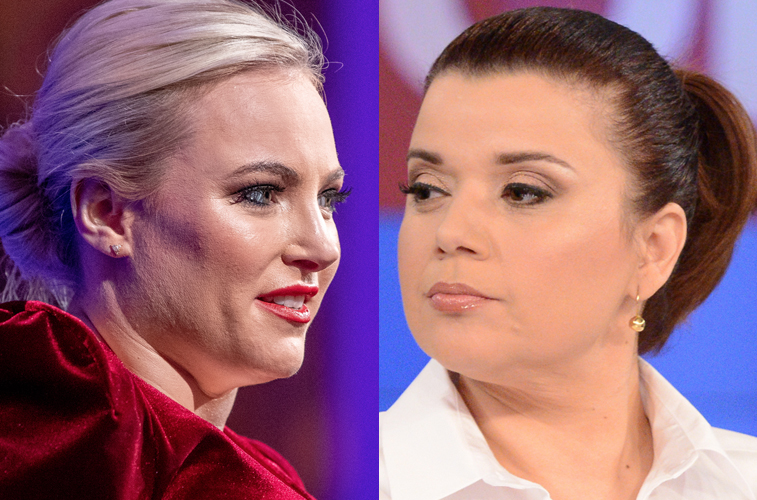 The ladies of the ABC talk show were talking about Marie Kondo’s success and the launch of her e-commerce site. Abby Huntsman weighed in on the topic and said that she would like the organizer to come into her home to get rid of “junk” she doesn’t need.

“The other night I literally… that’s too gross, I won’t tell the story,” Huntsman said before retracting her thought. She then teased by saying, “I found something on the floor that you should never find on your floor. It took me a minute to realize what it was.”

When Joy Behar asked Huntsman if she had animals she answered, “I have animals and children… it could’ve been one from anyone.”

This is where Navarro came in with a raunchy joke that left McCain completely flabbergasted and disgusted.

“You got three kids, so it obviously wasn’t a used condom,” Navarro quipped.

Fans that follow The View every day know that McCain shuts down every time the panel takes on topics about sexuality. You can see her complete disgust after Navarro makes her joke, even cutting her mid-sentence as she was ready to interject her opinion.

Behar noticed McCain was uncomfortable and asked her if she wanted to say something.

McCain is not cool with talking about sexual topics on The View and it’s the only time where she doesn’t interrupt her co-hosts. Fans had a lot to say about the conservative co-host and her interactions with Navarro.

“Meghan is rude as a whole but is always extra salty when Ana Navarro is there,” a fan noticed.

“Meghan McCain is a bitter, unhappy woman,” a Twitter user commented. “She disrupts the segments and the conversation by the healthy, mature adults. Generally, I like her, but when she loses control, she’s scary.”

“And here’s Meghan petulantly sulking and taking offense at Ana’s really funny line,” a fan wrote on the YouTube comments.

“Why so uptight, Meghan?” another viewer on YouTube questioned. “Even Abby laughed at the joke. [McCain] behaved like she was the one who [the joke] was directed at.”

“Can we have a single segment Meghan is not moaning? Relax girl,” another fan on YouTube added.

Is Meghan McCain getting fired?

In addition, there have been rumors that McCain is not happy on The View and she’s on the brink of getting fired. As a result, gossip around her firing has been fueled by several unscheduled absences where she claimed she was sick.

McCain dispelled all those rumors of her impending departure by clearing the air during a recent episode.

“Whenever one of us is sick on this show, it is tin foil hat conspiracy land on social media,” she said. “Sometimes we just get sick. We’re not fired, we’re not abducted by aliens… nothing has happened. We’re just sick, that’s it.”