With Sunday’s AMC premiere of the first of the last eight episodes of The Walking Dead, we started to get hints of how the series’ fast-approaching finale might disburse our protagonists (several of them into spinoffs). There was a lotta talk about being ready to run from the Commonwealth and ensuring that, if and when the time to do so came, there would exist a clear path out. But we still had miles to go, or at least yards, before anyone actually, you know, went. So rather than get ahead of ourselves, let’s press “pause” for a moment and review the key developments in “Lockdown.” 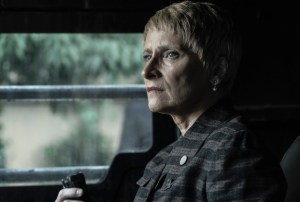 ‘WE’RE HERE TO TAKE OUT S—THEAD AND THE D—KLESS BRIGADE’ | Picking up where the Season 11B finale left off — refresh your memory with our recap — the hour began with Negan being volunteered by Daryl to infiltrate the Commonwealth in order to protect our heroes’ loved ones there from Lance and his minions. While Negan did that, Daryl, Maggie, Gabriel, Aaron and Annie would do their best to take out Lance. How? By luring him and his troopers into an underground tunnel. The plan worked — kinda. Down, Lance and his men did indeed come. And Daryl did manage to put a knife to his nemesis’ throat. But the good guys were so badly outnumbered that it seemed as if they’d bitten off more than they could chew.

‘THE COMMONWEALTH IS HER KID, I’M JUST A PROBLEM’ | Back in the Commonwealth, protesters demanded that Sebastian be brought to justice, a turn of events that so chagrined Pamela that she initiated a lockdown — to, um, protect everyone from the approaching swarm. Yeah, that’s the ticket. At the same time, Negan persuaded Mercer to bend the rules and grant him a fast pass through processing by dropping Daryl’s name. Once inside the mega-community, Annie’s husband was recruited by Carol to help procure them and their friends a safe route back out — by finding an M.I.A. Sebastian and handing him over to his mother. Once the brat’s cheek stopped stinging from Pamela’s slap, he lied that he was innocent. At that point, Carol suggested that she and the governor could help each other. If Sebastian really is innocent, Carol theorized, someone must be responsible for all those people going missing. Was she about to throw Lance under the bus to get him to stop terrorizing her pals? 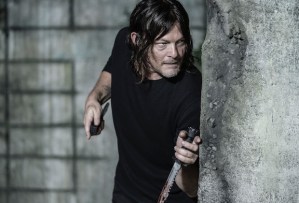 ‘YOU DON’T HAVE TO EVER SAY SORRY, NOT TO ME’ | Besides all of the actual plot movement, “Lockdown” also slowed down to give us a few capital-M Moments. During an opening voiceover by Judith, we got flashbacks to days gone by — including glimpses of Rick, Shane, the Governor, Alpha… but, oddly, not Glenn, Lori, Beth, Tyreese… So many characters that it would’ve made sense for us to see. Alone with Daryl, Maggie acknowledged how hard it must have been for him to kill Leah. He didn’t need an apology, though. “Glenn would’ve wanted me to look after you,” he said. Sparks a-flying, Magna shot down Yumiko’s notion of staying behind with Tomi if everyone else ran. “If the time comes to go,” Magna said, “then we’re all going.” And when Negan revealed to Carol that he and Annie had married and were expecting — and he was worried about his wife out there — Carol sweetly assured him, “It’s gonna be OK.” So, what did you think of the Season 11C premiere? Grade it in the poll below, then hit the comments with your questions and quibbles.