Home » TV » The Wheel of Time Trailer: Moiraine Wonders Who Amongst Her Is Destined to Stand Up to the Dark One The Dark One is coming, and as revealed in the new trailer for Prime Video’s The Wheel of Time, the mighty Moiraine (played by Rosamund Pike) knows that someone in her midst is the Dragon Reborn, and thus is destined to face this threat. But who? 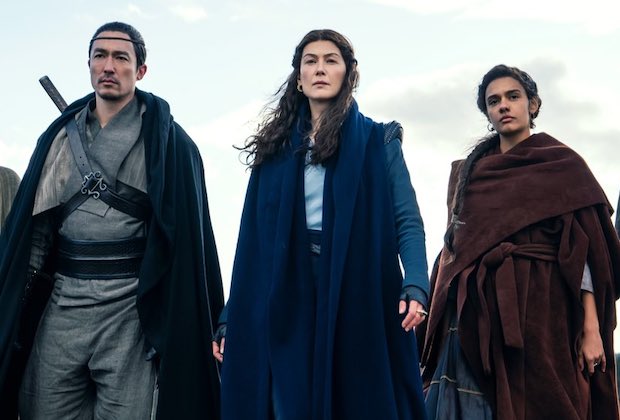 Adapted from one of the most popular and enduring fantasy series of all-time, Prime Video’s The Wheel of Time series is set in a sprawling, epic world where magic exists and only certain women are allowed to access it. The story follows Moiraine, a member of the incredibly powerful all-female organization called the Aes Sedai, as she arrives in the small town of Two Rivers. There, she embarks on a dangerous, world-spanning journey with five young men and women — Perrin Aybara (played by Marcus Rutherford), Rand al’Thor (Josha Stradowski), Mat Cauthon (Barney Harris), Egwene al’Vere (Madeleine Madden) and Nynaeve al’Meara (Zoe Robins) — one of whom is prophesied to be the Dragon Reborn and as such will either save… or destroy… humanity.

Additionally, looking further down the road, the following cast additions for Season 2 were announced at New York Comic Con: Ceara Coveney will play fan-favorite character Elayne Trakand, while Natasha O’Keeffe (Peaky Blinders) and Meera Syal (Broadchurch) will fill roles that are as yet undisclosed but were teased as “two of the most important characters in the series.”

The (already-renewed) Prime Video series‘ first three episodes (of eight total) will premiere Friday, Nov. 19, with new episodes available each Friday thereafter — leading up to a season finale on Dec. 24.

Want scoop on The Wheel of Time, or for any other show? Email [email protected] and your question may be answered via Matt’s Inside Line.