A Storm came in during a Toronto meteorologist’s forecast on Friday, but not the kind of storm anyone was expecting. This was actually Storm, the dog belonging to the weatherman himself.

Global News Toronto’s Anthony Farnell was mid-segment when his adorable pup suddenly wandered into the shot. He was polite, going straight to his dad and trying to get attention (and treats). But when Farnell wouldn’t acknowledge his pup directly — though he did make viewers aware that he knew his dog was on screen — Storm simply wandered around the green screen sniffing for treats.

“Yes, Storm is in the building, getting some treats, walking on thin air,” Farnell noted, before valiantly trying to continue on with his forecast. And to his credit, he managed to stay on topic without laughing for most of the forecast. 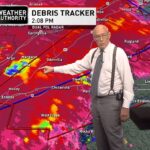 Indeed, at various points, it looked like Storm was walking on water, then walking on clouds, and eventually walking over the weather map itself. Eventually though, he was more than happy to just stand by Farnell’s side watching and offering moral support.

Just before Farnell wrapped up his report with the dog with the “dog walking forecast,” someone off-screen tossed a treat to storm, setting him back on his sniffing endeavors once more.

You can watch the full segment above.