Home » TV » What age is Millie Bobby Brown, is she dating Romeo Beckham and who are her parents?

What age is Millie Bobby Brown, is she dating Romeo Beckham and who are her parents?

MILLIE Bobby Brown made headlines for her amazing portrayal of Eleven in the Golden Globe nominated Netflix series Stranger Things.

Eleven and the gang will be back on our screens when series three drops on July 4 so here's the lowdown on the talented actress. 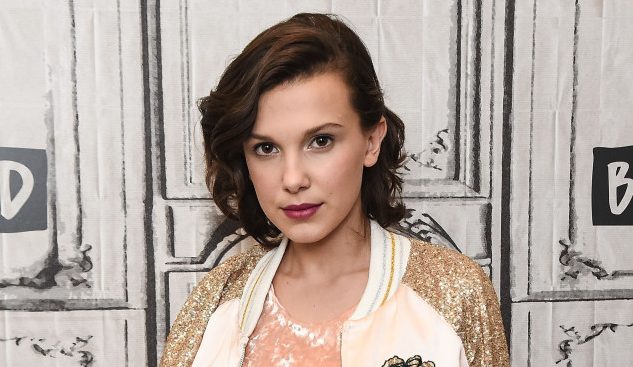 Who is Millie Bobby Brown and what is her background?

Millie is a 15-year-old actress who was born in Marbella, Spain in 2004 to English parents Kelly and Robert.

Her family moved back to England when Brown was four years old, living in Bournemouth before emigrating to Orlando four years later.

She now spends the majority of her time living in Los Angeles.

Millie enrolled in acting classes to give her something to do on Saturdays in Orlando.

After being spotted by a Hollywood talent scout who was impressed by her natural abilities the whole family then relocated to Los Angeles.

She was offered representation by nearly every agent who met with her.

Millie has a reported net worth of around £2.3million ($3million), and according to the Daily Mail the actress can bag more than £3million per movie.

In September 2017, Breaking Bad star Aaron Paul joked he had "adopted" Millie after she went out for dinner with him and his family.

Her real parents are Robert and Kelly Brown who reported sold everything to move to Hollywood to help Millie become an actress.

On April 19, 2018 Millie became the youngest person to be named by Time magazine as one of its 100 most influential people of 2018. 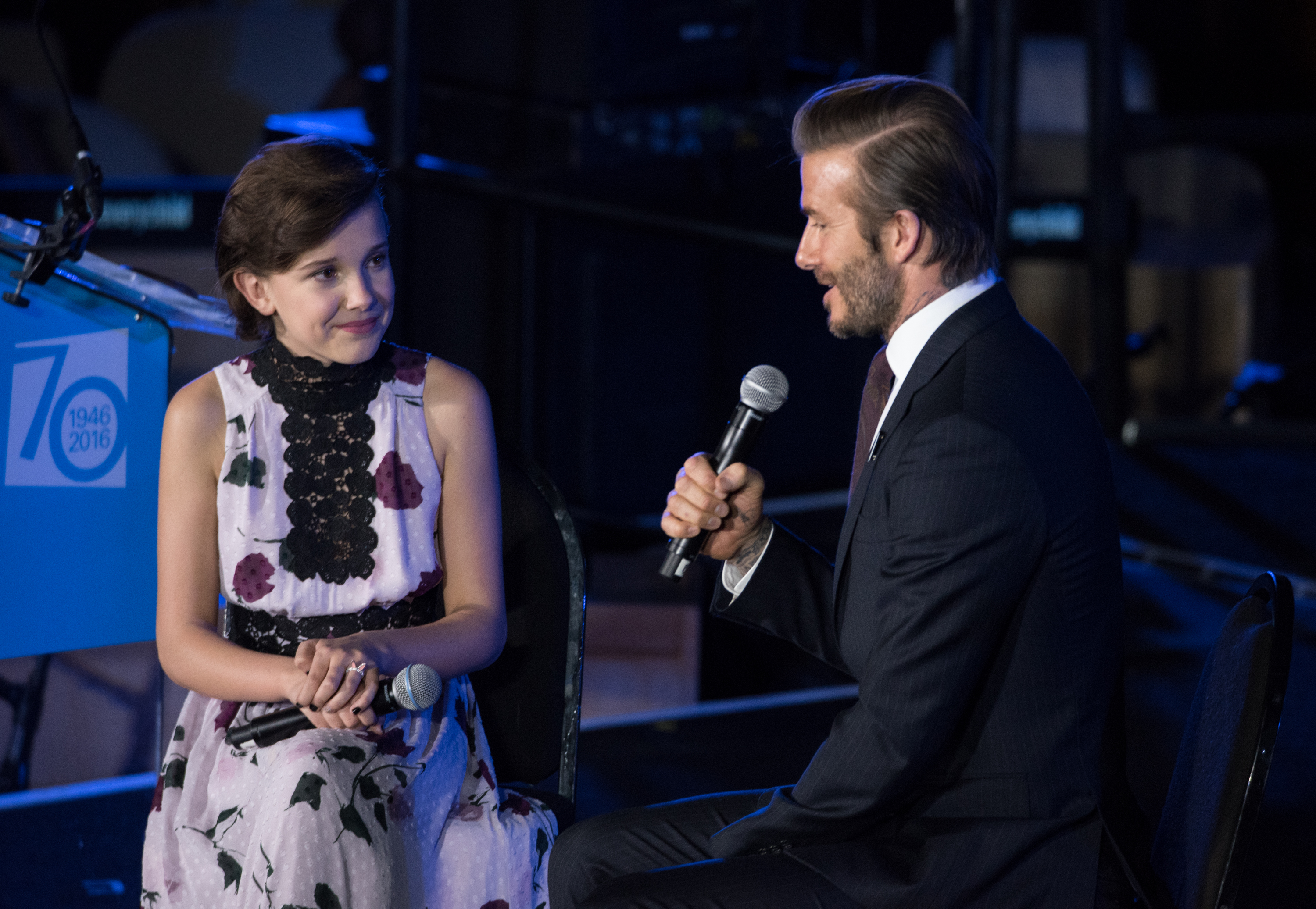 The Sun exclusively revealed that Millie IS dating Romeo Beckham.

Mum Victoria is said to "adore" the actress, and approves of the burgeoning romance with her 16-year-old son.

Millie was first got introduced to Romeo’s family in December 2016 when she handed out an award with him at charity Unicef’s 70th anniversary gala.

A source said: “It’s early days but they make a very sweet couple. Posh has given it the seal of approval as she is a big fan of Millie’s.” 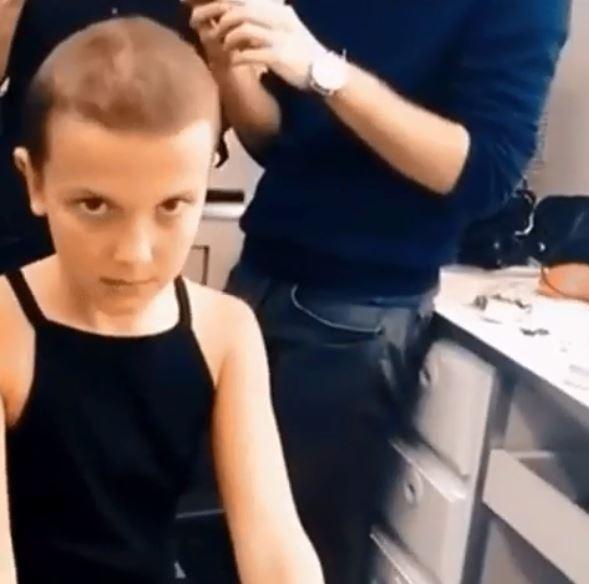 What else has Millie done apart from Stranger Things?

In 2013, after only three months in LA, Millie got the role of young Alice in ABC’s Once Upon A Time In Wonderland.

Kicking off with that part, Millie built up an impressive CV during her time in the industry, including Grey's Anatomy and Modern Family – even before bagging her role in Stranger Things.

She was also the star of Sigma's music video Find Me with Birdy.

In the video Millie mimes along to the lyrics sung by fellow Brit Birdy as she walks through the fast-paced city of LA.

Millie is also a star in the blockbuster film, Godzilla: King of the Monsters which hit cinemas in the UK on May 29. 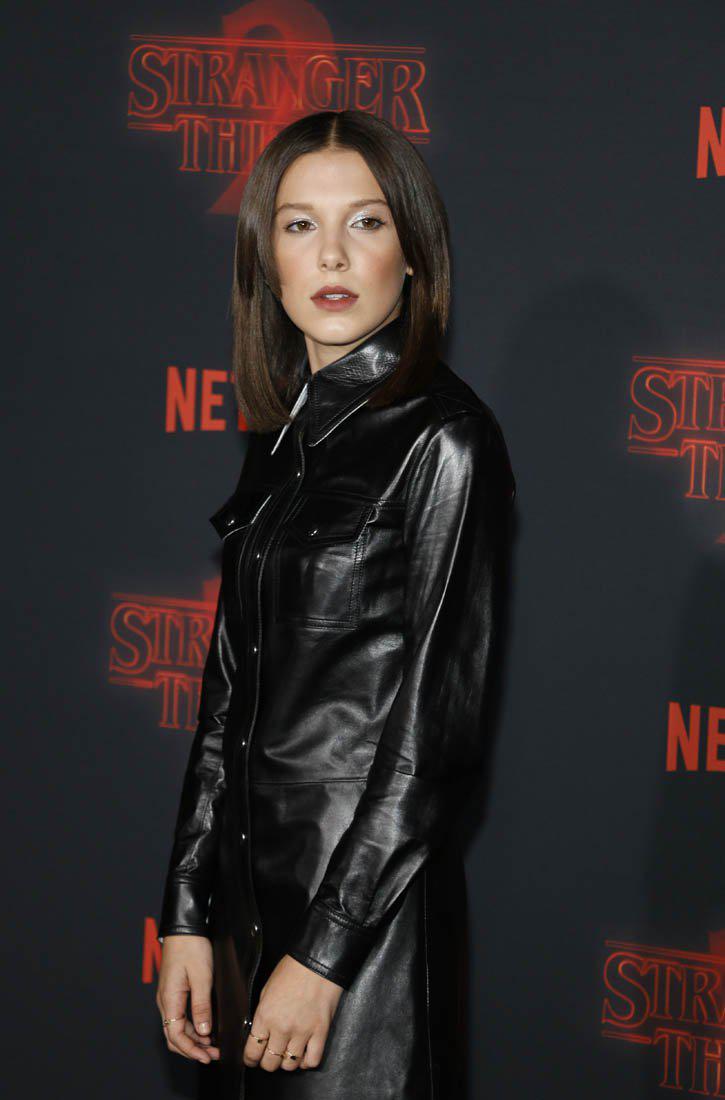 When did Millie shave her head?

Millie shaved her head for the first season of Stranger Things in 2016, and says she found doing it so incredibly empowering.

She wrote on Instagram: "The day I shaved my head was the most empowering moment of my whole life. The last strand of hair cut off was the moment my whole face was on show and I couldn’t hide behind my hair like I used to.

"The only image I had in my head about what I could possibly look like is Charlize Theron in Madmax.

"As I looked at myself and couldn’t see my old self, I realized that now; I have a job to do and that is to inspire other girls that your image or exterior part is not what I think is important. What I find important is caring, loving and inspiring other girls.

"Thought to share my thoughts during this life changing moment."

How did Millie get the part in Stranger Things?

Millie was in London, aged 12, when she received a call about the Stranger Things audition.

They didn't give her much information about the show or about her character – a telekinetic prisoner with an obsession with a snack called Eggos – until she got the role.

Show creators the Duffer Brothers didn't tell Millie she would have to shave her head until the final audition, which really upset her mum.

To prepare for the role, they told her to watch 80s' TV movies like The Goonies and ET.

The most challenging part of the role was that Eleven didn't have much dialogue and Millie was forced to convey most of her emotions through actions and expressions.