Home » TV » ‘What We Do in the Shadows’: The Stories Behind Season 3’s Most Memorable Costumes

For beings forever trapped between life and death (a liminal state some may refer to as “Staten Island”), a lot’s going on with the vampires of “What We Do in the Shadows.” Season 3 begins with Nadja (Natasia Demetriou) and Nandor the Relentless (Kayvan Novak) splitting duties as co-heads of their local vampiric council, supervised by The Guide (Kristen Schaal) and guarded by a newly promoted Guillermo (Harvey Guillén). This in turn leaves much of the day-to-day, or night-to-night, shenanigans on the shoulders of Laszlo (Matt Berry) and Colin Robinson (Mark Proksch).

The changes to the group’s dynamic aren’t massive, and they certainly don’t alter the hilarious mock-doc humor, but even small changes spin out in big ways which leaves the group split up by season’s end. Costumer Designer Laura Montgomery spoke to IndieWire about getting as much character as possible into the look of the show’s leads before they ended up stuck on boats, trains, and in basements.

The series takes a good deal of its costuming logic from the Taika Waititi film that inspired it, in that each character’s fashion is guided by the era in which they became a vampire. “So that’s why Nandor is kind of stuck in the 1400s,” Montgormery said, or why Nadia and Laszlo are “somewhat Victorian.”

But even with that baseline, Montgomery found opportunities to dig in deeper and create varied, lighter looks that eschew nondescript layers of black often reserved for creatures of the night. “[The show] wanted the vampires to always be dressed in dark colors so that they could be kind of in the cloak of night. But I really wanted to push it more into a mid-tone world and introduce more color just so that you could see the detail on the clothing,” Montgomery said. 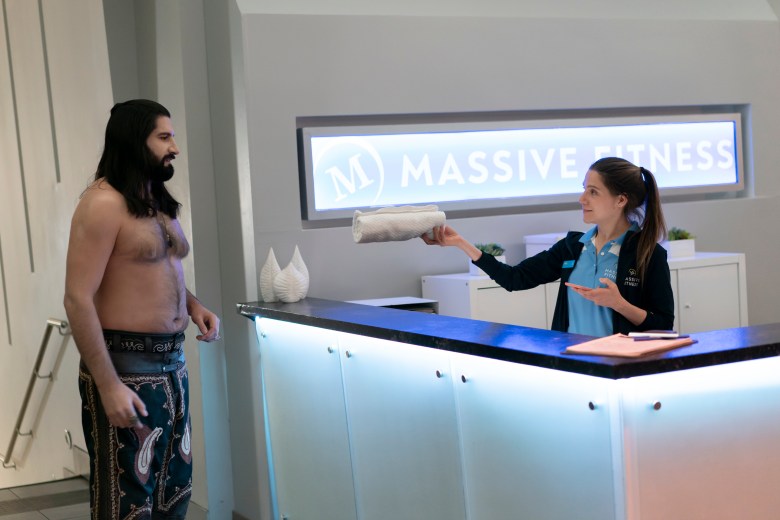 “What We Do in the Shadows.”

“With Nandor, too, I wanted to really delve into his geographical history. What would the costumes and the clothing of that period look like in that place? So [we started] looking into Persian textiles and art from the period, references from the period to kind change his silhouette a little bit and change up some of his fabrics.”

Some of this is cleverly seeded into Nandor’s Ascension Day party, which gives him the period-appropriate, if slightly faded, look of a Persian lord while the rest of the house is decked out in deeply ahistorical Party City fezzes and red fringe. The most playful and colorful addition to Nandor’s wardrobe, however, are the shorts he wears to a 24-hour gym while courting an attendant named Meg (Laura Collins).

“In Iran there’s a sport called Pahlevani, or Zourkhaneh, and those pants are traditional pants worn for that sport. We found someone in Iran who could make the shorts for us. So we got them custom made to [Kayvan’s] measurements,” Montgomery said. With help from a member of her team who’s from Iran, the custom design flew with a family member from Tehran to Toronto, where the show shoots. “I wasn’t even sure it would happen just because it seems so far away. And until I got them in my hands, I was like, “Is this going to happen?” But it did. It’s a cotton fabric, but then there’s the leather appliqué. There’s the embroidery. They’re beautiful.”

They’re also a fantastic representation of Nandor, back in a position of true authority for the first time in 700 years, but still out of his element, slightly alienated. “There’s a balance, because I never want to take away from the performance. I think if you dress someone in a really clownish way, then it doesn’t leave the actor room to be clownish. But with comedy you can definitely use brighter colors. Even though they’re vampires, it’s not somber, you can use more decoration,” Montgomery said. “We can do, you know, just kind of silly details, like a lot of lace on Laszlo, big collars.” 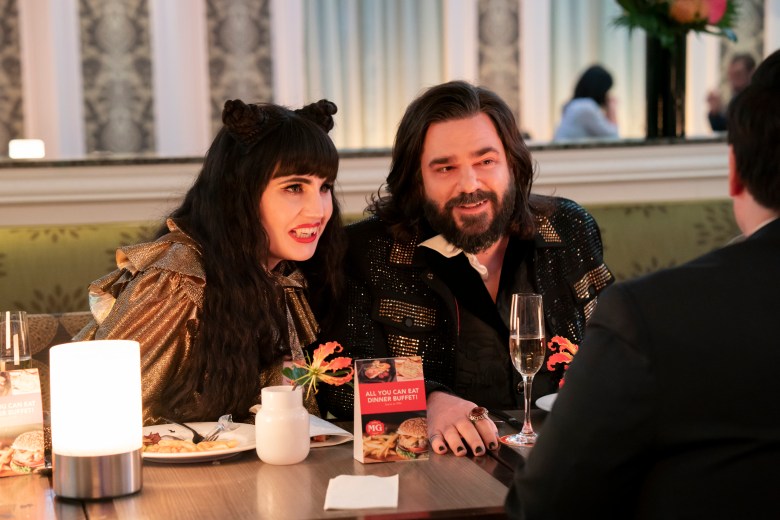 With Nadja and Laszlo, whose looks are much more bombastic, Montgomery said that one of the ways into showing their progress as co-leader of the Vampiric Council and Colin Robinson’s reluctant bro, respectively, was to leap into the wardrobes they’ve collected over the decades. “I love working on period shows and movies and the great thing about ‘What We Do In The Shadows’ is that it’s all the periods and it’s contemporary too. So you don’t have to only have Victorian items. They have collected things for many, many years. So Nadja can have an ’80s Versace belt mixed with the rest of her costumes. [It works] as long as it is within the character. Would they make that choice?” As Nadja gains confidence and collects more hearts ripped from the chests of vampires who are behind on their membership dues, Montomgery places the character in different, slightly lighter patterns and textures that are still very ostentatious and slightly Victorian, but brighter and more assertive.

For Nadja and Nandor’s Vampiric Council wardrobe, Montgomery found ways to inject character into the limitations of “white robes”. “[The robes were] an opportunity of like, okay, what would their version of it be? Because they’re the ones designing it. So for Nadia, you know, we added some lace. I was looking at Chinese cloud collars. So that’s how she gets the beaded color with the tasseled fringe. And with Nandor, I thought, you know, how can I add in more of a Persian element to his? So there’s a lot of hand embroidery on his shoulders.” 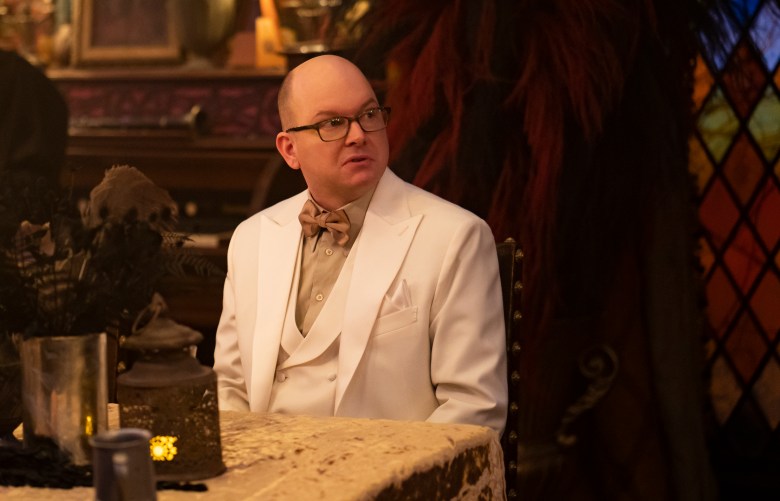 Even in the complete absence of silly detail, Montgomery found ways to work in texture that helps characterize the show’s leads. Because Season 3 hones in a little bit more on the history of perennially bland energy vampire Colin Robinson, Montgomery could play with style tied, in a deeply bland, beige way, to his origins. “We were like, okay, if [Colin’s] a hundred years old, the time when he was a young man would have been the ’30s to the ’50s. So I was able to use elements of those periods, of tailoring from that period, to really kind of focus his character.” It is not from the depths of Reddit, then, that Colin finds the bow ties and Tam O’Shanter hats that help him pop ever so slightly out of the background — but rather from his own past. 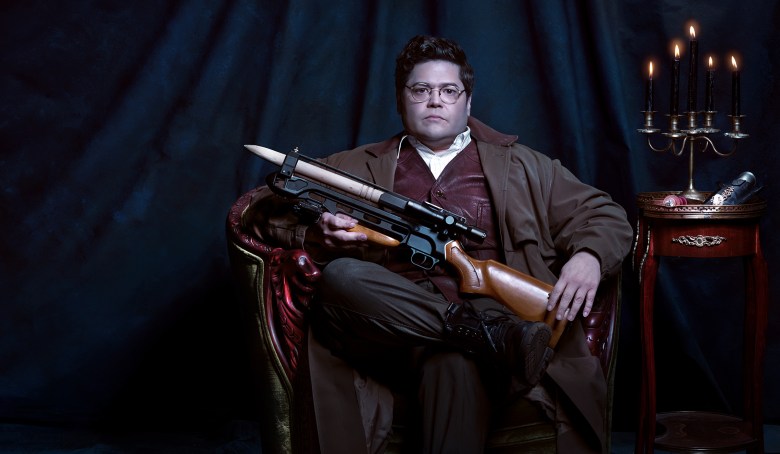 The character with maybe the most room to run style-wise in Season 3 is Guillermo, now fully revealed as a scion of legendary vampire hunter Van Helsing. “I think he has the most arc in his storyline this season,” Montgomery said. So adjustments were made to visually make him more badass – at least as badass as one can be while still wearing very cosy sweaters.

“Even the littlest thing, like, we introduced a pair of leather gloves, which just feel more slick, more assassin-y, little things. He got to roll his sleeves up, which it was very exciting for Harvey. And, you know, added an element of toughness to him,” Montgomery said. “We changed a few things to change the silhouette of his pants — he got a cargo pant that was more tapered. He got more of a combat boot. So we really tried to push him into like, ‘Okay, he’s the bodyguard. He’s taking on this role.’” 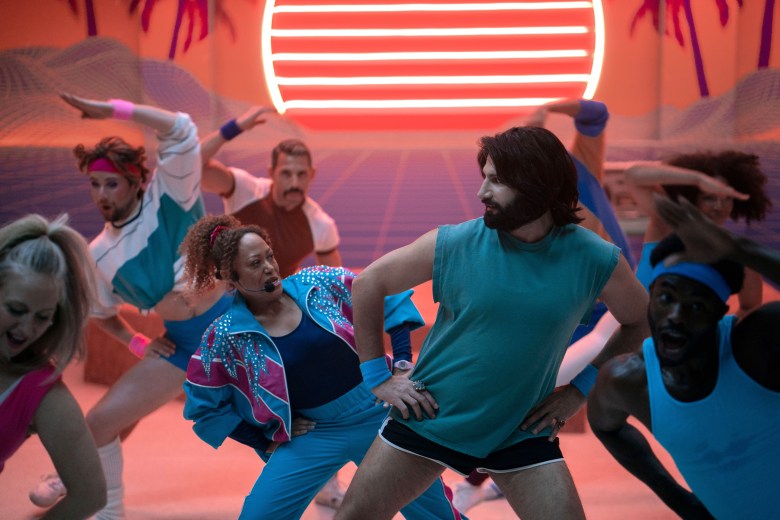 Montgomery’s favorite escalation of Season 3’s wardrobe, however, was the vampiric wellness center/cult that Nandor stumbles into at a particularly vulnerable moment. Montgomery got as far away from dark trench coats as possible as she designed custom dancewear for the cult members. “We watched a lot of dance sequences from ‘Perfect,’ the Jamie Lee Curtis movie,” Montgomery said of inspiration for that episode.

“I think everyone has an idea of ’80s aerobics and what the ’80s looked like. And so we really tried to make it authentic. Like these vampires did live in the ’80s and they are stuck in the ’80s. And so they’re not doing our hindsight version of it.” Montgomery’s choices in the episode first help play up the contrast between the cult and Nandor, and richly pay off once he joins their ranks. The image itself of seeing Mr. The Relentless in spandex is as horrifically funny as the poor vampire tearing out his own fangs.