Where Are You Really From?

The second four-part season of this social history series opens with host Michael Hing, "Australia's third favourite Asian-Australian comic", in Ingham, Far North Queensland. Operating with the knowledge that almost half of all Australians are either first or second generation migrants, Hing is keen to examine issues of cultural identity and heritage. Here, he's visiting the Italian community that has grown around the sugar-cane fields since the late 19th century. The series' aim is to showcase a range of immigrant communities around the country: where they came from, how they have developed and the challenges they face. In Ingham, where the mounds of gnocchi and cannoli look mouth-wateringly good, there are problems as the population is ageing and shrinking, with young people moving away in search of education and employment opportunities. 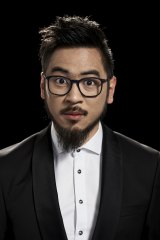 Based on Jessie Burton's bestselling novel and set in Amsterdam in 1686, this intriguing three-part drama is strikingly shot to look like a series of Dutch Golden Age paintings. It follows the trials of wide-eyed Petronella "Nella" Oortman (Anya-Taylor Joy) who is traded into marriage with wealthy merchant Johannes Brandt (Alex Hassell). He shares his substantial house with his severe, pious sister, Marin (Romola Garai), and their servants, Otto (Paapa Essiedu) and Cornelia (Hayley Squires). As a wedding gift, Johannes buys Nella a dolls house, a scaled-down replica of his home, which she proceeds to furnish. Her project starts to take on a life of its own when pieces that she hasn't ordered arrive and appear to predict events in the house. The Brandt household feels heavily burdened by the weight of secrets and lies, and Nella, whose large eyes seem to drink in all around her, attempts to negotiate her place in this new world, making discoveries about the social order and her mysterious new family.