Home » TV » Whoa, Did NCIS Just Set the Stage for a Part-Time Mark Harmon Next Season?

Whoa, Did NCIS Just Set the Stage for a Part-Time Mark Harmon Next Season? The following contains major spoilers from the March 16 episode of CBS’ NCIS.

This week on NCIS, Gibbs landed in the dog house when a brash act of aggression threatened to end his career. In the end, was Boss’ bacon able to be saved?

Or did the episode end up paving the way for series star Mark Harmon to appear only on a part-time basis, in the event NCIS is renewed? (As THR.com reported at the time of NCIS: New Orleans‘ cancellation, Harmon — whose contract is up — was poised to call it a day until he learned that his doing so would get NCIS cancelled; as such, he entered talks to return for a handful of episodes if the show returns for Season 19.)

The episode “Watchdog” opened, at least, with a roadside accident that nearly left a live missile in the middle of a street in Falls Church. But when NCIS arrived on the scene, Gibbs grew interested in the fate of the dog that the Navy transport had swerved to miss. The pit bull in question, eventually dubbed “Lucy” by Kasie, was found not far away, bleeding from a gunshot wound. When delivered to a nearby veterinarian for treatment, NCIS learned that it was the third such dog to be brought in with a gunshot wound.

Gibbs, McGee, Bishop and Torres sniffed around a house in the woods, beyond where Lucy had been found. Its proprietor, a little old lady, alerted the team to a guy who regularly parks his trailer by her pond, ostensibly to fish. But when Gibbs looks into what the guy has submerged in the pond, tethered to a rope, he discovers several drowned pit bulls. Incensed, Gibbs sees the man, Luke Stana, emerge from his trailer, and makes a beeline for him. Stana can barely get a word out before Gibbs is whaling on him, knocking him to the ground. Gibbs starts to choke the (alleged!) animal abuser, before Bishop and the others pull him off.

Once back at HQ, Gibbs is returning from we can assume a chewing-out by Vance when Inspector General Coyle shows up to cuff him and take him away. But before Gibbs surrenders himself to Coyle, he quietly orders the team to “tell the truth.” 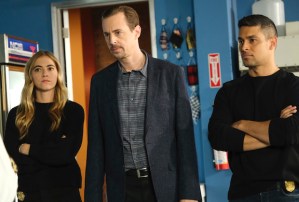 Except… McGee, Torres and Bishop don’t. Instead, they spin a story of Stana tripping and falling — though that is far from consistent with the suspect’s injuries. Gibbs is disappointed to hear what story his team told, but before he is himself interviewed by Coyle, a lawyer named July Wunderman shows up to put a halt to the proceedings — though Gibbs subsequently relieves the Vance-appointed stranger of her services.

When the little old lady from before balks at serving as a witness to Stana’s questionable behaviors, that leaves the team with no hard evidence connecting the hospitalized lout to the dead/abused dogs. At best, they have a working theory that he is involved in an illegal dog-fighting ring, has been juicing pit bulls with steroids, and when the pooches lose, he… drowns or shoots them. Stana, though, seems to have an excuse for every piece of it, including the wad of winnings found in his mattress.

Luckily — though it sure seemed extra-damning at first! — McGee happened to be beta-testing a body cam during Gibbs’ clobbering of Stana, and the video reveals a pre-existing blood stain on the dog owner’s shirt. Kasie is able to connect that blood to gunshot Lucy, who is currently recuperating post-op at NCIS. Alas, Stana has checked out of the hospital, but a GPS tag on his dainty poodle’s collar leads the team to him, where they catch him clearing out the location of his dog-fighting ring. NCIS has been yanked off the case by IG Coyle, sure, but Coyle is standing right outside the barn door with the local police, ready to haul in the cretin.

Gibbs had already cut a deal with Coyle, to tell his side in trade for him team being left untouched. So imagine everyone’s surprise when the case against him lands in limbo due to “evidentiary” issues. As Vance later explains to Gibbs (who now has taken in Lucy), Coyle and his wife have two rescue dogs, so there was little sympathy for Stana. That said, it has been left to Vance to inflict punishment. And when Gibbs says that yes, he regrets what he did — as in, he wishes he had killed Stana — Vance is left no choice but to suspend his top Special Agent indefinitely, so Gibbs turns in his badge and gun. (And no, that wasn’t Harmon’s own dog playing Lucy.)

If this storyline did, in fact, set the stage for Harmon/Gibbs only appearing in a handful of Season 19 episodes, are you OK with that? Keeping in mind that incoming addition Katrina Law would help fill the void as a series regular for any next season?